The new contemporary restaurant, Angelica, nestled among the large hotels of downtown Jerusalem, is an ideal location for tourists but still caters to locals.

By DEBBIE KANDEL
Angelica's grilled beef tenderloin
(photo credit: courtesy)
Advertisement
There is a popular expression: If it ain’t broke, don’t fix it.Angelica was always a great restaurant, and after five years on Shatz Street, it has moved to Washington Street, opposite the Kind David Hotel. I am not always a fan of change, so I was curious to see if they had managed to make the restaurant and menu more contemporary, without ruining the dependability of the food.Some people dream of meeting the star of their favorite TV show; for others, it is a politician they admire. For me, the opportunity to meet a chef whose food I have been enjoying for the past 10 years was an exciting prospect. This was not the first time I met chef Marcos Gershkovitch – having recently reviewed his dairy restaurants Grand Café in Baka and the new Café de Paris in Rehavia – but Angelica is his baby, and my dining companion and I were delighted to meet with him again.Gershkovitch opened Angelica with chef Erez Mergi in 2008, having originally worked together as sous chefs in renowned Tel Aviv restaurant Rafael. Mergi worked in various restaurants in New York and San Francisco before returning to Israel to work at Rafael.Gershkovitch was the head chef at Canela when it first opened and persuaded Mergi to join him there before they opened Angelica.The design of the new restaurant is modern but still warm, with a huge window into the bustling kitchen and a funky mirrored ceiling that reflects each of the food stations. While you can see everything that is happening to prepare your meal, the window prevents the noise and the smells from the kitchens from disturbing the tranquility of your meal.One wall is made up of wine fridges, which house an impressive selection, including the most expensive bottle, which sells for NIS 2,400. We started our meal with a bottle of Rose de Castel, which was very smooth and fruity (NIS 170).Of the starters we tried, we both had a clear favorite – the cream of coconut soup with a fish-filled dumpling and wild mushrooms (NIS 53). The dish had a sweet chili punch, so it is not for those who shy away from spicy food.The flavor combination worked perfectly and instantly transported me to Thailand. Another favorite of mine was the grilled asparagus, Portobello mushrooms, bok choy, crispy egg ravioli with truffle vinaigrette (NIS 52). The mushrooms and asparagus had a wonderful charred flavor, and the crunchy ravioli had a soft-cooked egg yolk inside. I would have liked to taste more of the truffle flavor with the egg, but I thoroughly enjoyed the dish. We also sampled the fish sashimi (NIS 52) and the sweetbreads (NIS 62).The sashimi was served with lemon and soy tapioca, which had an interesting taste and texture and resembled caviar, so it worked well with this dish. The sweetbreads came with a spicy harissa, tangy cured lemons and deliciously sweet dried cherry tomatoes, which balanced each other well.As for the mains, there was no clear winner; we enjoyed all three dishes we tried. The seared goose breast (NIS 112) was cooked to perfection, with a pink center and crispy top, and the duck sauce was sweet without overpowering the other flavors. It was accompanied by a refreshing mango and melon salad with tiny pieces of smoked duck breast, which provided a surprising smoky flavor to the whole dish. The grilled beef tenderloin (NIS 132) was also cooked just the way I like it and came with a selection of grilled vegetables and potatoes that were crispy on the outside and fluffy in the middle.Luckily, we saved room for the Angelica hamburger (NIS 74), served with onion rings that had a tempura-like batter and were crunchy but not too oily. The burger was juicy and a perfect medium.Burgers have made an appearance on many of the menus of Jerusalem’s top restaurants, and Angelica’s version is a definite contender for the title of best burger in the capital.We finished our meal with a bottle of Sha’al Vineyard Gewürztraminer 2008 (NIS 130), which accompanied our lemon meringue pie and chocolate soufflé (NIS 42).The lemon meringue was artistically presented and had the right crunch to the pie base and tartness to the lemon filling, but I found the whole dish a little too sweet. The soufflé had the right balance of cooked outer layer and gooey inner layer and was not overly rich.I applaud the chefs and owners of Angelica for succeeding in the sometimes difficult task of updating the style and menu of their restaurant without sacrificing the charm that brings the regulars coming back for more time and again. 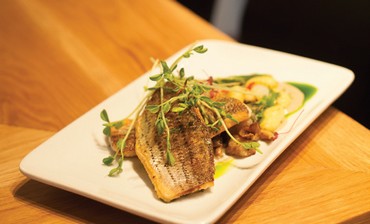 Angelica updated its menu keeping its original charm (courtesy)
The writer was a guest of the restaurant.Angelica
Kosher
4 Washington St., Jerusalem (02) 623-0056
Sun-Thurs noon-11 p.m.
Saturday one hour after Shabbat until 11:30 p.m.
Advertisement
Subscribe for our daily newsletter