Baked, fried, filled with anything from jelly to crème patissiere, here are this year’s Hanukka must-haves.

By NERIA BARR
NOVEMBER 20, 2013 11:13
1. Ben Ami
(photo credit: Courtesy)
Advertisement
1.Ben Ami bakeries celebrates the holiday with chocolate ganache-filled doughnut and Amaretto liqueur, as well as a host of other extremely rich and delicious ones.
We loved the brioche doughnut with vanilla crème and chocolate truffles (NIS 5 to NIS 8). The bakery also offers a host of latkes at NIS 79 for a box of 20, including dips. One is sold for NIS 4. 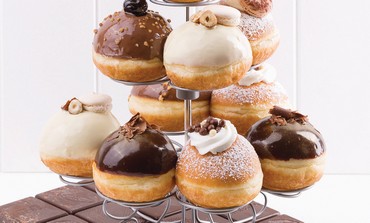 4. Metuka (Courtesy)5.The Roladin chain offers a large selection of doughnuts, including the classic one at NIS 4.50, gourmet ones made after famous desserts, and alcoholic ones in their Chaser collection, which includes Chocolaty and Bianco, malabi and coconut and Rochepraline at NIS 5.50 to 9.50.

Call (09) 899-9927 or go to 6. Shemo Bakeries offer a collection of baked and canola oil-fried filled doughnuts, including cinnamon, vanilla, berries and salt caramel (NIS 8), surprising filled ones at NIS 7, classic ones at NIS 5, as well as Moroccan sfinge at NIS 5 and American doughnuts at NIS 7.Kosher. For a branch near you, go to www.shemo.co.il or call (04) 810-4448.7. Lehamim, the celebrated bakery, also joins the Hanukka doughnut craze, offering everything from classic rich doughnuts to ones filled with French-style dessert creams. The doughnuts are offered either fried or baked (NIS 7). They also offer a variety of packages of 12 frozen latkes for NIS 49.99 Hashmonaim Street in Tel Aviv and other branches, (03) 561-8111. www.lehamim.com They deliver around the country.8. Abulafia, originally from Jaffa, has opened a new branch in Tel Aviv. For Hanukka, they offer great value sufganiot at NIS 2.50 each. The fresh-baked doughnuts include Nutella and ricotta, dolce de leche and American style jelly doughnuts.

73 Ibn Gvirol Street, Tel Aviv. (03) 716-9522.9. Oren Becker offers his boutique doughnuts, this year in cooperation with Van Gogh Vodka. A host of alcoholic doughnuts will surely get the party going. Choose from chocolate and caramel, white chocolate and espresso, bitter chocolate and black cherry and more (NIS 6). Becker also offers non-alcoholic ones at NIS 6, vegan ones at NIS 9 and sugar-free ones at NIS 9. 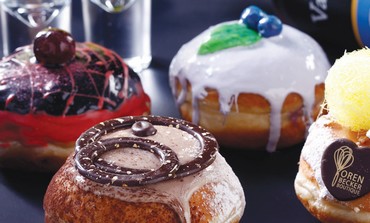 9. Oren Becker (Courtesy)30 Hanatziv Street, Tel Aviv. 076-542-3033.10. French-style brioche doughnuts are available at the lovely Bread Story café-bakery in Tel Aviv. They replace oil with butter and bake their doughnuts, adding a variety of fillings such as jelly, white chocolate, pistachio and fruit. 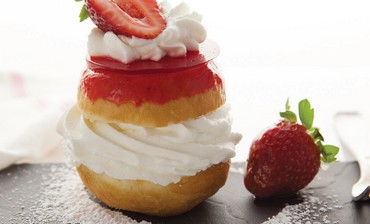 12. Dudu Otmazgin (Courtesy)13. Tatti Bakery celebrates with “miracle- filled” doughnuts that include jelly, Belgian chocolate, halva and vanilla. All hand-made doughnuts are NIS 4.90 to NIS 6.80.Tatti Café in Givatayim and Tatti Loft in
Advertisement
Subscribe for our daily newsletter