Love for textiles and traditional handiwork is a passion and a profession, says Noa Vidman.

By ORI J. LENKINSKI
DECEMBER 19, 2013 11:56
History repeating
(photo credit: Courtesy)
Advertisement
"Every family has historical textile pieces,” says Noa Vidman. Sitting amid stacks of neatly folded fabric in her shop Textilya, which will celebrate its third anniversary next month, she points to stretches of tablecloths, bedspreads and pillows that have made their way to her shelves from people’s forgotten closets.“Usually textile pieces are connected with the woman of the house. In every home, no matter where it is or who lives in it, you can find textiles. They are a part of our lives,” she says.Vidman is a soft-spoken woman with curly hair and a welcoming smile. The warmth she exudes is mirrored in her store, which is located in Jaffa. For as long as she can remember, she says she has had an affinity for sewing.“When I was 12, I started making backpacks. They had a drawstring closure and floral straps. I used to give them to my friends on their birthdays,” says Vidman. 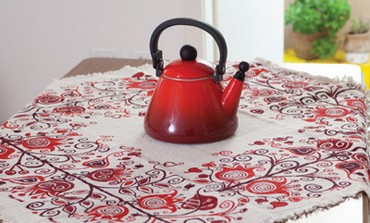 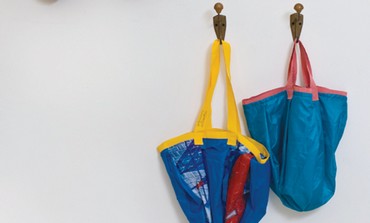 “The woman was 75 years old, Georgian, and a real expert in fabrics. She had an enormous collection that she had amassed over 30 years of enthusiastic work. She knew she wasn’t getting any younger, and her children had been urging her to get ridof her collection. Finally, she decided to let it go. It just so happened that we met,” says Vidman.Acting on what now seems like fate or a very good hunch, Vidman decided to bite the bullet and buy the entire lot.“That decision opened a path for me that led me straight here, to Textilya,” she smiles.Once she had received her unfathomable mass of fabric, Vidman slowly began to sort through it.“There were a lot of pieces that were stained or damaged. Little by little, I started to make sense of what I had,” she says.Six months after she purchased the goods, Vidman opened Textilya. At her store, she transforms relics that have fallen by the wayside and gives them a second life.“I take pieces that were once used on a daily basis and are now no longer relevant, such as tablecloths, and turn them into pillow coverings or bedspreads,” she explains “I don’t do clothing because clothes are so transient. I like stability. I feel that the home, even if it undergoes changes, is stable.”Once word got out about what she was doing, Vidman became a magnet for collectors and customers with pieces of their own that they wanted to rejuvenate.“I get a lot of calls from people who are cleaning out closets and find forgotten fabrics. They come in, and we brainstorm together about the possibilities of the pieces,” she says. 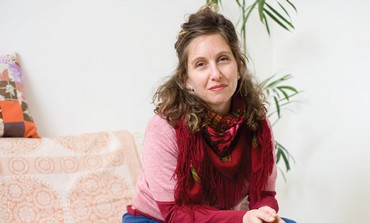 “I don’t do clothing because clothes are so transient. I like stability. I feel that the home, even if it undergoes changes, is stable.” (Courtesy)A few months ago, Vidman decided to take on a new challenge: stains. Until then, she had salvaged the undamaged pieces of cloth for her designs. In her new line, called Nothing’s Perfect, she creates new patterns by making collages out of stains. These pieces perfectly embody Vidman’s design philosophy, giving even the most ruined bits of fabric a new, honored place.Beyond the retail side of Textilya, there is an invitation to learn. Vidman is constantly seeking out new techniques to add to her arsenal and to pass on to her loyal clients.Textilya offers courses in embroidery, knitting and sewing. On the day that we met, she was laying out small cloth bags, each containing a skein of yarn and two needles for a knitting class that was about to start.“I don’t teach this class, but I attend it. I think I’m getting the hang of knitting,” she smiles.Each class meets once a week, for two or three hours, over a two-month period.Vidman leads daily workshops herself, such as the pillow workshop.“It’s a three-hour event that I teach. The participants select fabric from what I have in the store. Then they design a pillow.They do almost everything, all the pinning and ironing; everything except for the sewing.At the end of the session, they get to take their pillow home,” she says. “It makes a great birthday present.”She also gives private sewing lessons.In the future, Vidman plans to offer a host of new courses.“I want to include dyeing and printing in the near future. I’m not interested in opening a new location; rather, I want to reach out to more people, more materials and more elements of design. I want my customers to understand that with textiles, anything is possible,” she asserts. Textilya is located at 34 Yehuda Hayamit Street in Jaffa. For more information, visit www.textilya.co.il.
Advertisement
Subscribe for our daily newsletter