Thanks for Sharing starring Mark Ruffalo and Gwyneth Paltrow
(photo credit: courtesy)
Advertisement
FILM Moving Movie From Academy Award-nominated screenwriter and first-time director Stuart Blumberg (The Kids Are All Right) comes the new film Thanks for Sharing, a sharply comic and deeply moving look at a new kind of modern family, as a group of friends in recovery learn to face life together with heart, humor and humility. With Mark Ruffalo, Gwyneth Paltrow and Tim Robbins.Films With SpiritThe seventh international Spirit Film Festival will take place at the Tel Aviv Cinematheque October 23-26. The movies in the four-day program will feature themes relating to spiritual development, personal empowerment and social and environmental awareness.

For tickets and more information: (03) 606-0800 and www.spiritfestival.co.il
ART Food For artThe six-day “Food Processor” exhibition, which opens today in Tel Aviv, takes an eclectic look at food and how we prepare it, consume it, buy it and present it, as well as various other food-related issues.The artist roster includes multidisciplinary artist Uri Gershuni, photographer Angelika Sher, Enrique Rottenberg and more.Chalal Omanut Hakir, 33 Hahashmal Street, Tel Aviv Manifold ManofimThe season of exhibitions and openings is here again, and the annual Manofim, the major cultural event of Jerusalem, is back. Between October 17 and 24, some 250 artists, 30 exhibition openings and dozens of cultural events will fill the city.Manofim provides an opportunity to see next season’s works. All the events are free of charge and open to the public. The project not only displays works of art but also enables the public to meet local artists and view the artistic work being done in the city. Free shuttles will convey the public from one gallery to another, some accompanied by actors and performers.Among the participants are students of the Nissan Nativ Acting Studio, who will perform a series of improvisations.
MUSICRoadside Music 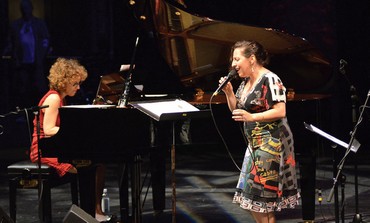 Israeli-born singer, Ayelet Gottlieb and pianist Anat Fort (courtesy)Jazz musician Ayelet Rose Gottlieb will showcase her new album in an Israeli tour. The 30-something Israeli-born and currently Canada-based jazz singer’s latest release, Roadsides, provides ample evidence of the breadth of her musical and stylistic embrace. Gottlieb has gathered a bunch of highly accomplished sidemen for the occasion, including pianist Anat Fort, husband-and-wife team guitarist Udi Horev and double-bass player Ora Boazson-Horev and oud player and violinist Ihab Nimer.October 19 at Beit Jamal Monastery; October 27 at5 Ozen Bar in Tel Aviv.Mad About ManceJazz pianist Junior Mance, 85, will be the first star act of the new Hot Jazz season, teaming up with Japanese violinist Michi Fuji (left) and bass player Hide Tanaka (right).Tonight at 9 p.m. at the Tel Aviv Museum of Art and tomorrow at 9:30 p.m. (tickets: (03) 573-3001and 1-700-500-039); Saturday at 9 p.m. at Abba Khoushy House in Haifa (tickets: (04) 822-7850).A Leeds SingerMichael Chapman, one of England’s finest original singer/ songwriters, debuts in Israel this week.Emerging from the same musical gene pool as acousticstyle singer/songwriters such as John Martyn, Nick Drake and Roy Harper, 72-year-old Chapman still releases on average an album every two years and is on the road for many months a year, performing for fans around the world.The tour begins October 20 at the Ozen Bar in Tel Aviv, moves on to Uganda in Jerusalem on October 21 and continues at the Jazz Club in Mitzpe Ramon on the 22nd, Hasida in Pardess Hanna on the 23rd and Moshav Amirim on October 24.
CHILDREN

The new Tzlilei Kesem (Magical Sounds) season opens at the Tel Aviv Opera House on Tuesday. The series, overseen by Nitza Shaul, offers children an opportunity to sample some of the beauty and thrills of different genres of classical music. The season curtain raiser, entitled “Vivaldi – The Ginger-Haired King of Baroque” will be performed this Tuesday to Thursday at 5 p.m. and 6:30 p.m. daily.For tickets and more information: (03) 692-7777 and www.israel-opera.co.il The Wonders of Opera Alice in Wonderland returns to the New Israeli Opera stage after the success of the world première last summer. This colorful opera includes young Alice and the fantastical characters of Wonderland, such as the Cheshire Cat, the Mad Hatter and the Queen who does not like to lose.The production aims at bringing the world of opera closer to children. With the Ra’anana Symphonette Orchestra and composer David Sebba conducting. For ages 5 and up.Tomorrow and Saturday at 5 p.m. at the Opera House in Tel Aviv. For tickets: (03) 692-7777; www.israel-opera.co.il.


DANCEGood EnergyAs part of Breast Cancer Awareness Month, the Tiltan troupe and the Ravid Medical Institute are donating 150 tickets for the Hot Irish Stew dance show to cancer patients undergoing treatment.Saturday at 9 p.m. at Rapaport Hall in Haifa. NIS 120. Tickets are available at (04) 838-4777. 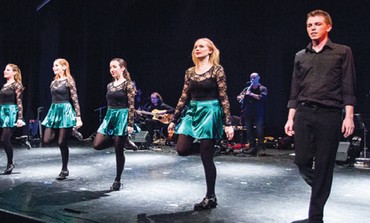