Rolling Stones reportedly in talks to play Israel in June 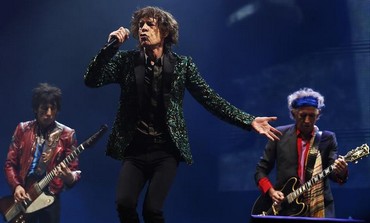 Media reports were awash on Tuesday that Israelis might get some "satisfaction" this June with an outdoor concert by The Rolling Stones. Channel 2 reported that promoters Marcel Avraham and Gad Oron have offered the legendary British rockers led by Mick Jagger and Keith Richards $4.5m to perform at Park Hayarkon.Avraham and Oron have been involved with bringing some of the bigger international acts to Israel in recent years, including Elton John, Leonard Cohen and Justin Bieber.The Stones emerged alongside the Beatles in the early 1960s to become one of the most successful groups in rock and roll history with hits ranging from "Satisfaction" in 1965 to "Honky Tonk Women" in 1969 and "Miss You" in 1978. Since their acclaimed 1981 album Tattoo You, the band has lived on its reputation, sporadically releasing pedestrian new material but packing in stadiums and arenas around the world for their live shows.Last month, they announced a 14 On Fire  14-date tour beginning in February, including shows in Abu Dhabi, Japan and Australia.Also last month, the Stones' bass player Darryl Jones visited Israel and performed with the Australian-based hard rockers Dead Daisies at a sold-out show at the Barby Club in Tel Aviv.It was the first time in Israel for Jones, who was recruited by the Stones to fill the gap caused when original bassist Bill Wyman retired in 1993. Jones joined the rest of the Dead Daisies, including members of Guns & Roses and INXS in visiting tourist sites in Jerusalem and at the Dead Sea.
Advertisement
Subscribe for our daily newsletter