"The most important piece of photographic equipment you will ever use is actually your head, and not your camera," says Tom Langford.

By TOM LANGFORD
Camera 370
(photo credit: Reuters)
Advertisement
The American And Canadian Institute in Netanya holds a yearly photography exhibition. For the last three years I’ve had the honor of selecting the entries and helping to hang them. The latest exhibition opened on April 9 and the theme is “My Best Shot.”One of the most difficult skills for an aspiring photographer to master is the ability to look at their pictures as others may see them. When choosing favorite shots the temptation is to select pictures that bring back memories, sights and sounds, atmospheres and feelings that we had when taking them. We have to remember, however, that our pictures cannot awaken these personal responses in others who only see what is actually in the photograph.We all take plenty of snaps that have meaning only to our family and friends. When we show these to outsiders we have to explain why we took them what they are about. The art of photography, however, is to create images that communicate without words, and tell their own stories in the wonderful and powerful way that only still pictures can do.Really good still pictures are anything but still: They are alive with movement and energy – they draw us unto their world and take our eyes and emotions on a meaningful journey. To disassociate ourselves from the personal and to appreciate what is universal in our work takes practice and discipline. This is why the most important piece of photographic equipment you will ever use is actually your head, and not your camera.My best shotI was invited to include some of my own pictures in this year’s exhibition. I chose two pictures from the past, shot on film, and two recent digital shots. 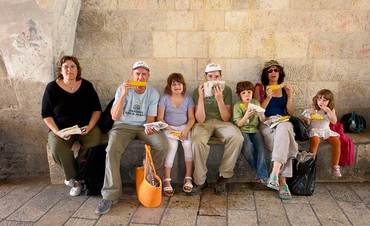 This is both a snap and a photograph. As a family snap it brings back memories of a very hot day trip to Jerusalem with family and friends. After a long and exhausting walk in the sun we all rested in the shade eating tasteless boiled sweetcorn. The picture works because of the variety of expressions neatly presented in a row. When I saw this opportunity to take a good shot I had to be extremely quick with my camera: The line-up might have only lasted for seconds before the group broke up.

The Azrieli Center is a well-known architectural landmark in Tel Aviv, and has three skyscraping towers that are usually shot to show their enormous scale. When I first came to Israel I decided to add some pictures of the Azrieli to my architectural portfolio from a fresh perspective. This shot works by showing a familiar sight in a very unfamiliar way with the emphasis on artistic quality. 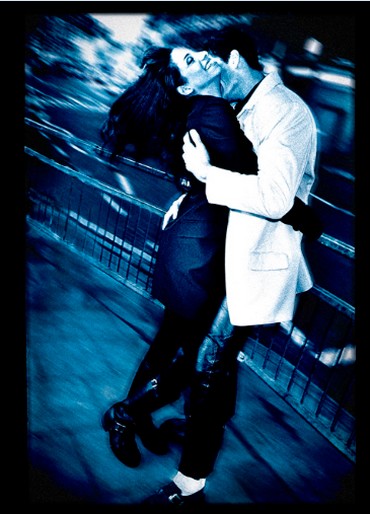 Early in my career I shot lots of models in the streets of London, UK. I would simply take them out, wander around, and see what would happen. I very rarely used flash, but for this early evening shot, taken outside a local supermarket, I used the standard Metz 45 hammer-head flashgun bolted onto my Olympus OM1.I took it with a special high-speed black-and-white film processed in a high-acutance developer to give a grainy, gritty texture that adds to the atmosphere: It’s strange that we now want digital cameras that give us high-resolution and minimal grain when used in low light at high ISOs. Today I would have to use certain techniques and digital filters to mimic film texture. 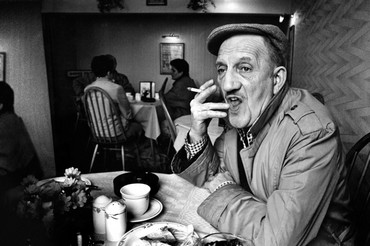 This is a picture of my father, that I took many years ago, which has a special meaning to me. The strong composition, expression and atmosphere, however, give it a life of its own.The skill of looking at your own pictures and seeing what is there, rather than what you think is there, is called critique. When you can put aside your personal associations you will be able to assess what works and what doesn’t work in each picture. This will gradually alter the way you shoot: Your pictures will gain in strength as you spot and eliminate their weaknesses. Eventually you will have the satisfaction of knowing that your pictures will tell their own stories. Bon Voyage.Picture Clinic