A flood of appreciation for a drop of milk

An exhibition looks back on the history of Tipat Halav clinics from their establishments in 1921, when the infant mortality rate was shockingly high.

By BATSHEVA POMERANTZ
OCTOBER 29, 2010 16:42
Dokey Express 311
(photo credit: courtesy of Issac Kaplan Old Ysihuv Court Museum )
Advertisement
In the early 1920s pasteurized milk – an innovation at the time – was packed in ice boxes and delivered by donkey to Jerusalem mothers on the Donkey Express, which left the Old City’s Tipat Halav station and proceeded to the Rothschild Hospital on Rehov Hanevi’im. That first Tipat Halav station was opened almost 90 years ago, in June 1921. 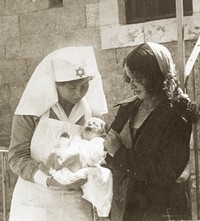 Nurse with baby“The donkey of Tipat Halav has gone far,” said public health nurse Moria Ashkenazi at the opening of “A Drop of Milk,” an exhibition at the Isaac Kaplan Old Yishuv Court Museum in the Jewish Quarter. “Tipat Halav services reach out to everyone. It played an important role in immigrant absorption and during times of war.”The exhibition focuses on Jerusalem’s transformation from a city with minimal health services during Ottoman rule and the British Mandate to a public health success story. This success is due largely to the balancing act between old and new, and the uncompromising fight of the staff of the Tipat Halav Well Baby clinics to remedy the situation.In the twilight of the 19th century, Jerusalem’s population numbered 30,000 to 40,000, including some 17,000 Jews of the Old Yishuv, forming a mosaic of various communities. Child mortality until the beginning of the British Mandate period (1917) was 80 percent.“Four out of five children did not live to see their first birthday,” says Ora Pikel-Zabari, curator of the exhibition. “The causes behind this shocking statistic were poor hygienic conditions due to bathing only once a week, polluted water pits, early marriages and a shortage of medications.”The overcrowded hospitals were seen as risky, so women preferred giving birth at home – on damp cellar floors. If mother and baby survived childbirth, they were at further risk due to their lack of knowledge about postpartum and postnatal care.On permanent display at the Old Yishuv Court Museum is a room of the new mother with a canopy bed. “Also known as Himmel Bettes [sky beds], these were imported by Europeans coming to the Holy Land in the 19th century,” says Pikel-Zabari. “A husband who could afford the bed would rent one for his wife for 40 days for childbirth and postpartum recovery.”Jews of the Old Yishuv blindly trusted folk customs and amulets to ward off the evil eye, which may not have helped but probably didn’t hurt, either. A newborn boy and his mother were especially susceptible to the wiles of Lilith (a mystical character known to harm newborn boys and their mothers) and were therefore not left alone until after the circumcision. On display in the exhibition are “Shir Hama’alot” sheets that were placed near the baby, and the Condilla (oil lamp) that Sephardi Jews would carry as they marched from the synagogue to the mother’s room the night before the circumcision and then read from the Zohar.Lay midwives with little training were pitted against certified midwives. Ita Yellin, wife of Zionist activist and educator David Yellin, admired lay midwife Tzipa de Buba, popular among Ashkenazi, Sephardi and Muslim women, whom she described as “wise, nimble and clean.”