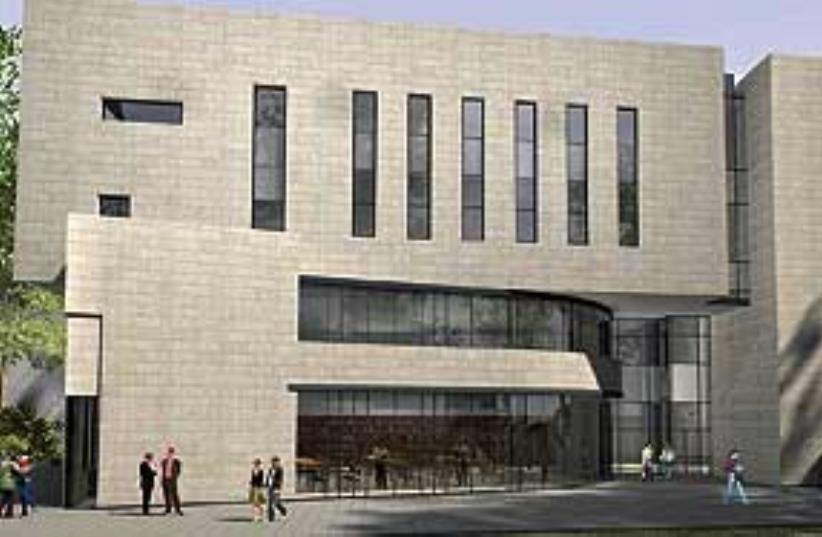 campus311
(photo credit: Courtesy)
Advertisement
On a hill in Neveh Granot where less than 50 years ago wolves roamed, the Schechter Institute of Jewish Studies dedicated the first of the three buildings that will comprise its new $23.2 million campus in a festive ceremony on Tuesday. The dedication, which also marked the Institute’s 25th anniversary, was attended by the chairman of the Jewish Agency, former MK Natan Sharansky; the president of the Schechter Institute Rabbi Prof. David Golinkin (who is celebrating his 10th anniversary in the post); Jewish Theological Seminary of America chancellor Prof. Arnie Eisen; graduates, students and friends and donors.The $8.2m., five-story, 2,300-sq.m. Legacy Heritage Center for Jewish Studies, designed by Israel Prize Laureate Ada Karmi-Melamede, is slated to open in September and will include a beit midrash (study hall) for rabbinical students from Israel and abroad, 14 classrooms and lecture halls for Schechter’s more than 600 MA students and the TALI Education Fund Pedagogic Center. When the 11,000-sq.m. campus is completed, it will also encompass the Liebhaber Center for Jewish Education and a new library.The Schechter Institute of Jewish Studies, a non-profit organization dedicated to the advancement of pluralistic Jewish education in Israel, is comprised of four educational enterprises: The Schechter Institute of Jewish Studies Graduate School, which grants MA degrees in Jewish studies; the Schechter Rabbinical Seminary, which trains rabbis for the Masorti/Conservative Movement; the TALI Education Fund, which operates enriched Jewish studies programs in 185 schools and kindergartens in Israel for some 38,000 children; and Midreshet Yerushalayim, which provides Jewish education to Israelis and Russian-speakers in Israel, as well as operating TALI schools in Ukraine.Sharansky noted that the main challenge facing Jews the world over is how to strengthen Jewish identity. “The Schechter Institute is a center for strengthening Jewish identity in Israel. Israelis discover Judaism here and enter into the world of their heritage and tradition.”

During Golinkin’s speech, he noted that while Israel has succeeded inmany things it has failed “to transmit our heritage to the nextgeneration... Our campus intends to deal with one of the most pressingproblems – how to transmit Jewish tradition to Israelis… Our childrenneed to know where they came from to know in order to know where theyare going.” The dedication also featured the awarding of the Schechter Medal toRobert Rifkind, the outgoing chair of the Schechter Board of Trustees;the late Bill Davidson; Rabbi Marc Liebhaber and the Legacy HeritageFund. Two study sessions were held in memory of Rabbi David Clayman –one in English by Brandeis University historian Prof. Jonathan Sarnaand the other in Hebrew by comedian Jacky Levy.The institute celebrated the dedication of its new Tel Aviv campus inNeveh Tzedek, housed in a restored 19th-century Templer building, onWednesday.
Advertisement
Subscribe for our daily newsletter