Cityfront: ‘If this isn’t a Zionist enterprise, what is?’

The Sde Bar youth farm directors are in shock as the institution for troubled boys is ordered closed by the Welfare and Social Services Ministry. 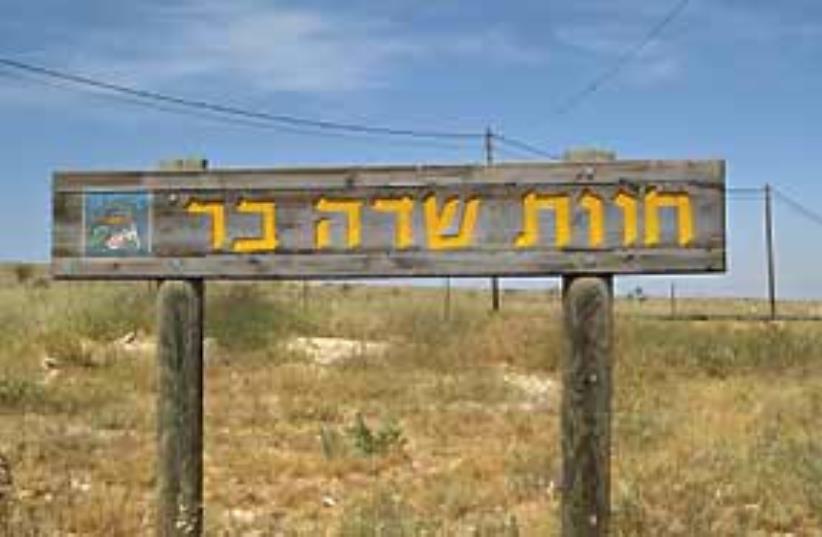 sde bar311
(photo credit: Gil Zohar)
Advertisement
Following a Welfare and Social Services Ministry-appointed commission to examine allegations that include sexual abuse, alcohol and drugs at the Sde Bar youth farm near Nokdim – notwithstanding the fact that the commission found the allegations to be baseless and did not recommend closing the institution – Sde Bar was ordered closed on April 15 and the ministry’s funding terminated.That ruling came as a shock to the youth village’s founder Yossi Sade, who has dedicated 14 years to helping abandoned teenage boys, and to Sde Bar’s acting director Yehezkiel Klein.“There was a student – I don’t want to mention names – who had been asked to leave. He said, ‘I’m leaving but I’ll make you leave too,’” says Klein of the series of events that led to the closing of Sde Bar, a facility that has enjoyed a high rate of success in rehabilitating troubled boys.Pursuing a vendetta, that disgruntled youth turned to Ma’ariv reporter Kalman Liebeskind. “He wrote a very unflattering article about the farm, most of it untrue,” says Klein. Sade, in turn, filed a defamation lawsuit against the Tel Aviv daily for NIS 1 million.“If the article were true, the police would have investigated and arrested Sade,” says Klein, 57, from Kibbutz Kfar Etzion. “That’s the absurdity of it. As Yossi said, ‘These kids come from places with prostitutes. I don’t need to send them to prostitutes.’” In response to Liebeskind’s expose, the ministry appointed a commission chaired by Tel Aviv lawyer Pnina Guy to investigate Sde Bar. That commission’s findings, released on January 27, revealed irregularities in management but did not specifically recommend closing the youth village.Klein is highly critical of the commission, which interviewed 30 people but not him, Sade or the institution’s resident psychiatrist Dr. Doron Emanuel – who has worked at Sde Bar for nearly a decade since it relocated from Beit Shemesh to its site at the foot of Herodion in east Gush Etzion. The names of the 30 people interviewed remain secret, says Klein.“I have no doubt the commission made a gross error in reaching its conclusions,” Emanuel wrote in a February 21 memo to the Beit Etzion charitable foundation under whose aegis Sde Bar has been receiving some donations.The commission also declined to interview Sde Bar veterinarian Rani Margalit regarding allegations that the farm’s animals were neglected and abused.“So many people who could give professional testimony were ignored,” emphasizes Klein.Touring the farm on Sunday, Klein showed off the dining hall, welding workshop, computer room, basketball court, olive groves, goat pens and horse stables, explaining how the teenagers were made responsible for the animals’ welfare, including milking the 250 goats and making cheese and yogurt, the sale of which helped finance the farm.Klein declined a request to interview the few remaining boys still living on the farm – a series of caravans on the edge of the desert that had served as the facility’s dormitories and classrooms.Before the report was issued, there were 32 boys living on the farm, he says, each with his own tragic story. One was a haredi teen from the Ponevezh Yeshiva in Bnei Brak who was disowned by his parents after he said he wanted to drop out of his Talmud studies to enlist in the IDF – a move that would damage his sisters’ marriage prospects. Another was orphaned as a result of his parents’ murder and suicide. All the boys had fallen between the cracks of various institutions and shelters, many ending up involved in petty crime and living on the streets.“These are boys who don’t believe in society. You have to work very hard to restore their belief in the system,” says Klein. Some of them were illiterate when they arrived, he notes.Through intense intervention including one-on-one tutoring, Sde Bar staff gradually reestablished the youths’ trust in society, encouraging them to take their high school matriculation exams. Most graduates enlisted in IDF combat units, and some continued to return to Sde Bar on furloughs, making the farm their only home.“If this isn’t a Zionist enterprise, I don’t know what is,” says Klein.A demonstration against the Welfare and Social Services Ministry’s closure order was held opposite the Knesset on April 14.Klein’s last hope is a meeting slated for May 2 with the Tali Yogev of the ministry’s residential school section.“The easy thing to do would be throw up our hands and say good-bye,” concludes Klein.
“We didn’t arbitrarily close Sde Bar,” responds ministry spokesmanRonie Malkai, citing the ministry’s report. The closure was ordered inthe best interests of the teenage boys there, she says.“Over the years we’ve received complaints, both orally and in writing,from professionals and former educators at the farm who were alarmed byirregular events they saw as endangering the minors living there,” shecontinues.“Furthermore, during the years of the farm’s existence a number ofarticles were published raising suspicions of improper administrationand even criminal activities. After two months of work during which thecommission interviewed 30 people involved with Sde Bar including wards,graduates, staff and employees of the Welfare Ministry, it wasdetermined that Sde Bar in its present format is not suitable for useas a residence for youth placed there by the state.”
Advertisement
Subscribe for our daily newsletter