The Dead Sea: From world wonder to sinkhole nightmare

The problem of sinkholes along the Dead Sea is getting worse and is negatively affecting tourism. 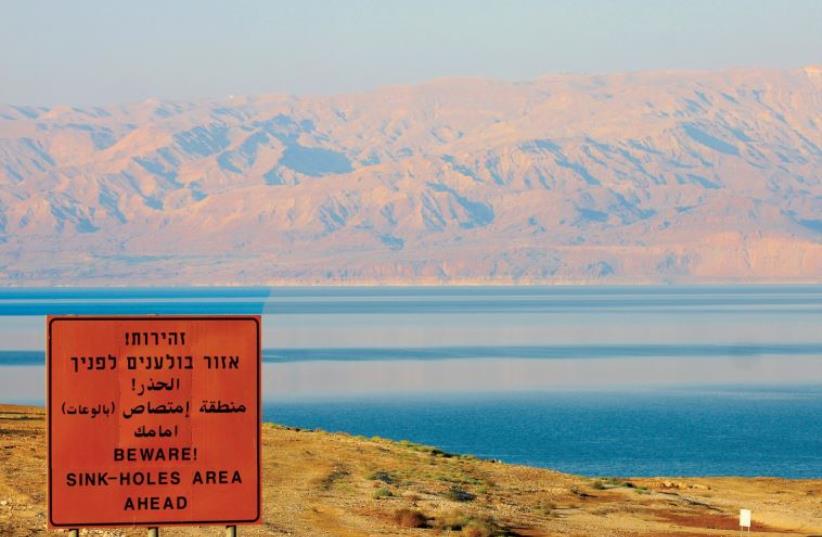 A sinkhole forms when a layer of solid salt is dissolved from sweet groundwater, after the sea recedes.
(photo credit: ARIEL BESOR)
Advertisement
They covered the first sinkhole with gravel and hoped it was a one-time occurrence.But then a cleaner fell into a three-meter-deep hole with her cleaning cart. The camping site was closed down that same day. They surrounded it with barbed wire and no one has gone inside for 17 years.A year later, Gavri was walking in the date orchard when suddenly he disappeared into a sinkhole.Twenty-five of the 40 acres of the date orchard are currently off limits.There’s a sign on the fence: Danger: sinkholes.And then last January, a sinkhole formed on Route 90, the main highway, cutting off the entire area, including Ein Gedi.Mazor, who’s been a kibbutz member since 1974, parked his car next to the bridge over Nahal Arugot. In 2005, the bridge collapsed following a huge flood. In 2009, the bridge was reopened with great fanfare, following a NIS 55 million investment. It was constructed according to the strictest of standards which took into consideration the unique climate conditions. Today, the bridge sits desolate and unused.
(Photo: Ariel Besor)Mazor shows us where the bridge is leaning at an angle, and the wide cracks in the asphalt that are the result of radical changes in the ground below.“Everything is being destroyed,” he says. “Everything you see here will collapse at some point. Nothing will remain.There’s a line of sinkholes, and where there are sinkholes, there is destruction.This area is already a difficult place to live in. There’s the intense heat and dryness, and now there is complete chaos. Our natural surrounding is disintegrating right in front of our eyes. It’s absolutely heartbreaking. And people need to know that this isn’t a natural disaster but one we caused with our own hands.”JUST FOUR years ago, the Dead Sea was a candidate for one of the Seven Wonders of the World. The Ein Gedi beach was the only free beach in the area. Recently, Israel invested NIS 4.5m. to make the beach more accessible for tourists.But two days after it reopened, the authorities closed it down and now it’s like a ghost town.The restaurant and the gas station at Ein Gedi are also empty, as though a deadly plague had been discovered here.We passed by the barbed wire and went inside the camping site. There are still electric poles, but the buildings have all fallen down and the huge sinkhole in the middle looks ominous, almost as though a nuclear bomb had fallen here.It’s absolutely cruel and devastating.The kibbutz would love to renovate the area, but no insurance company will cover them for sinkholes. And so the years pass and the sinkholes have turned into depressing monuments in a place that used to be filled with so much happiness and activity.“People remember the way the Dead Sea used to be, but no one seems to listen when we tell them it’s fallen 25 meters so far, and continues to drop an entire meter every year,” Mazor says sadly.“There is no other lowest place on earth, and yet the Dead Sea is treated like the periphery of the periphery. The roads are terrible and unmaintained, even though over a million cars drive here every year. Only when problems directly affect Tel Aviv does anything get done.Who cares about a few sinkholes?” This phenomenon reared its head for the first time 30 years ago.The Dead Sea Works began operating, the Jordanians began using the sea, the Deganya Dam was built and very little fresh water flowed into the Dead Sea, and the Jordanians pumped huge amounts of water out of Nahal Arnon.All of this together is what has caused the sinkholes.
One of 5,000 sinkholes near the Dead Sea. (Photo: Ariel Besor)