An alternative to Beitar

The fans who set up Beitar Nordia Jerusalem two years ago could no longer tolerate the behavior of some boorish Beitar Jerusalem followers; Today, the future looks bright for the fledgling club. 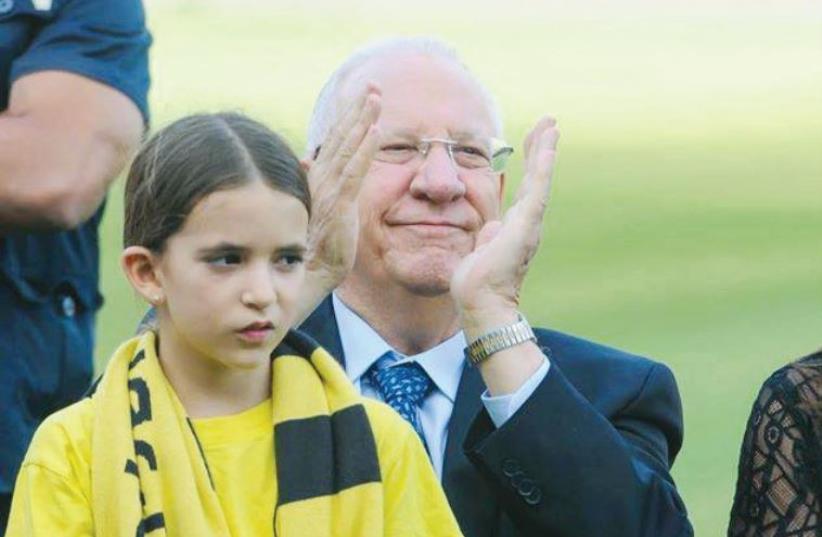 President Reuven Rivlin and his granddaughter Ziv enjoy a match between Beitar Nordia and former Beitar Jerusalem stars.
(photo credit: YINON FUCHS)
Advertisement
On the first day of July 2013, they realized they had no option but to leave. Fans Itzik Alfasi and Noam Bitton had fought with many others for the identity of the club for years, but what happened on that day at Beitar Jerusalem’s training complex at Bayit Vegan changed everything for good.The battle was lost.However, that was also the day a new club was born. Beitar Nordia Jerusalem was no more than a brainstorm of dejected fans at that stage. But it would soon become a reality, giving hope to many supporters who could no longer bear backing a club they felt was being held hostage by a group of several hundred fans, the vast majority of them working together under the name of La Familia.Two summers ago, captain Ariel Harush and midfielder Dario Fernandez were pelted with rocks, cursed and spat on by so-called fans at Bayit Vegan and required a police escort to leave the club’s complex.During the previous season, Harush and Fernandez had shown their support for signing Dzhabrail Kadiyev and Zaur Sadayev, two Muslim players from Chechnya.La Familia staunchly opposes the signing of Muslim players, and Beitar remains the only top-flight club in the country yet to field an Israeli Arab.The fans who set up Nordia could simply no longer coexist with the likes of La Familia.Nordia will begin its second season in the fifth and last division of Israeli soccer next month, hoping to win the league and gain promotion after ending its debut campaign in third place.Nordia has drawn support from many former Beitar Jerusalem players, as well as from some of those who used to run the club, including President Reuven Rivlin.
Fans of Beitar Nordia support their team.
(photo credit: HADAR ALFASI)It already has hundreds of members, each paying NIS 650 for a season ticket to the club’s matches and the right to vote at the nonprofit organization’s general assembly.In recent weeks, Nordia, which plays its home matches at Givat Ram Stadium, has raised over NIS 166,000 via an Internet campaign, and received an additional $100,000 from an American-Jewish donor who preferred to remain anonymous.The club has come a long way in its year of existence, and last month’s incident involving Beitar Jerusalem fans in Belgium was a stark reminder of why Nordia was ever established.Beitar was thrashed 5-1 by Charleroi in the first leg of the Europa League second qualifying round – a match that was held up at the start when La Familia members threw dozens of incendiary devices onto the pitch, enveloping it in smoke. In second-half stoppage time, a hard object thrown from the crowd hit Charleroi goalkeeper Nicolas Penneteau, forcing another delay.The happenings both on and off the field in Belgium drew condemnation from Prime Minister Benjamin Netanyahu, who said the national image was at stake and ordered legal action against them. The incident also resulted in owner Eli Tabib putting the club up for sale.European soccer’s governing body UEFA fined Beitar €95,000 and ordered the partial closure of the team’s stadium during its next UEFA competition match.It was, however, just the latest episode in a long list of incidents, capped by that fateful day in Bayit Vegan.That came several months after part of the club’s training complex was burned down in protest of the Chechen players’ signing, and a sign reading “Beitar pure forever” was unfurled during their first match at the club.Just a year earlier, in March 2012, several dozen La Familia members were involved in a skirmish with Arab workers at Malha Mall, right across from the team’s Teddy Stadium. They chanted “Death to Arabs!” and “Muhammad is dead!” before police and mall security guards intervened.“The straw that broke the camel’s back was the season-opening training session two years ago,” says Bitton. “It was clear that La Familia had won. The Chechen players didn’t continue, and chairman Itzik Kornfein and owner Arkadi Gaydamak were both chased out of the club.The fans threw rocks at the team’s captain and broke windows at Bayit Vegan.I think that broke many fans. The core group which left the club to set up Nordia was established as a result of what happened on that day. People who had fought so hard understood that this was no longer their team.”A Facebook page calling for the establishment of a fan-owned Beitar club in Jerusalem soon emerged, and the project began to gather steam.“It was a difficult and saddening occasion, especially considering what had caused them to behave in such a manner,” says Alfasi, now chairman of Nordia.“It was a very difficult experience that caused many people to understand that it will be impossible to fight this phenomenon from the inside. At that time, Beitar was fighting for its identity, and unfortunately the battle was not decided in our favor. But instead of crying about what happened, we decided to do something about it.”The name Nordia was chosen, as Beitar Jerusalem had renamed itself Nordia Jerusalem in August 1947 after the British Mandate outlawed the Beitar movement.“We wanted to build a team that honors the history of Beitar Jerusalem. Before matches, we honor former Beitar players, and we held a match against past stars like Uri Malmilian and Danny Neuman,” explains Bitton. “It is important for us to emphasize that we are not here because we have replaced our team, but because we want to continue Beitar elsewhere. We have taken all the good things that used to exist at Beitar and left all the bad things behind, and are continuing to a better place.”In May of this year, Nordia faced a team of former Beitar stars in a match in memory of former Beitar captain David Yishai.The match at Teddy Stadium was attended by 1,500 fans, including Rivlin, who used to be in charge of running Beitar Jerusalem but hadn’t been at a game in 15 years.

“We are standing here because we all love soccer,” he said at the pre-match ceremony. “We all want to win and all want to see good soccer. But soccer is not the only important thing. We are standing here because we understand that violence and racism are contaminating Israeli soccer. This game is not a derby, but a game of love toward the menorah of Beitar. On the one hand, there is Beitar with its history, pride and power. On the other, there is Beitar Nordia, which is trying to resurrect the heart and soul that used to belong to Beitar Jerusalem.A soccer pitch is a place where everyone agrees on the rules of the game, where everyone is equal and where talent decides the winner. Yalla, Beitar!” Arab players are welcome at Nordia, and the club is involved in social activities promoting coexistence in Jerusalem.“The situation at Beitar is beyond repair. There are still many fans who think otherwise, but I assume that as the years, or even months and weeks, pass, that will change,” adds Bitton.Over 150 fans attended Nordia’s season- opening training session last week, creating a carnival atmosphere – quite a change from the scenes at Bayit Vegan two years ago.“There was a sense of optimism and excitement, as well as pride, considering the long way we have come,” says Alfasi. “When we started last year, we didn’t really have fans, and we didn’t know the players, and everything was very amateurish and uncertain. Now we are standing steadily on our feet and looking optimistically into the future.”While clubs often come and go in the fifth division of domestic soccer, Alfasi is adamant that Nordia is here to stay.“We are Beitar. In our eyes, we have started Beitar from scratch, so our goal is to return to the days when we had 30,000 fans at Teddy Stadium,” he says.“We will certainly not settle for remaining in the lower divisions. It is tough to tell what might happen, but we would never have embarked on this journey had we not been optimistic.”
Advertisement
Subscribe for our daily newsletter