Will too many Israeli children lead to demographic disaster?

An Israeli academic claims the country faces problems if it keeps having too many children. 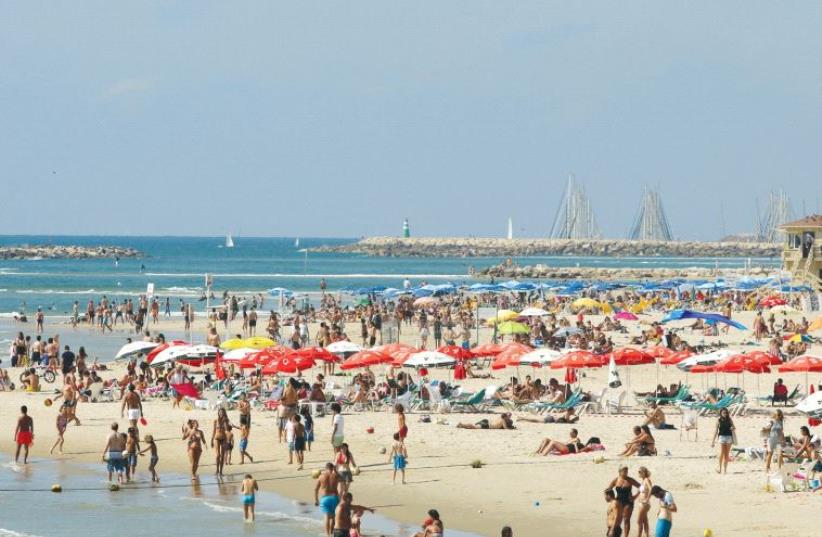 Tel Aviv beach
(photo credit: MARC ISRAEL SELLEM)
Advertisement
Two kinds of countries are emerging in the world, claims Prof. Alon Tal.“There will be lands where timid, myopic, or misguided leaders took a path of least resistance and let demographic inertia continue unrestrained,” he writes. In those places, people will become poor and food will prove scarce. In other places, he claims, “cultural evolution will combine to produce the regulation and self-restraint required for stabilizing population.”

“The fate of civilization may even hang on Israel’s population situation, which, if left unchanged, likely will play an expanding negative role in that nation’s behavior,” write Paul R. Ehrlich and Anne H. Ehrlich, in a foreword to The Land is Full: Addressing Overpopulation in Israel.The book, written by Tal, who founded the Israel Union for Environmental Defense and the Arava Institute for Environmental Studies, argues that Orthodox Jews and Arabs should reduce family size, and the country must plan for the future by having fewer children. He admits that “it is especially difficult to talk about strategies for limiting the number of Jews,” but nevertheless “our thinking must change.”What follows is a litany of claims that assert how overpopulation is a doomsday scenario for Israel.Tal notes that Israel is “unique among Western countries” in that 73 percent of Israeli women between 45 and 50 have two or more children. By contrast, the rate in Germany is only 51 percent. Israel is “one of the most crowded nations on the planet,” he writes, adding that it is “1,000 percent more congested on average than other countries in the OECD.”Tal notes that there are 7,522 people per square kilometer in the area around Tel Aviv. Rapid demographic growth creates poverty; there are crowded classrooms, crowded hospitals and crowded highways, the book claims. But Tal still brings some hope. He notes that many Arab families have reduced family size, in line with the Muslim world in general.“Phenomenal drops to replacement or below-replacement fertility levels were reported in Tunisia, Morocco, Qatar, Saudi Arabia and Lebanon,” he notes. Saudis are having fewer children than Jewish women in Israel, and Israel has nine times the population density of the kingdom.Tal claims people are deterred from addressing demography by “the very virulence of attacks against anyone who challenges such a central principle in the country’s code of ethics.”Those who critique Beduin birthrates, he says, are said to have racist motives, and those who say Jews should have fewer children are accused of being “anti-Zionist.”He asserts that the sense of “social justice” among “privileged, liberal intellectuals” makes them fear criticizing haredim and Beduin who have large families.Not to mention the constant presence of the Holocaust.“Some of the world’s leading Jewish environmentalists feel that the normal rules of demographic restraint should be suspended in the case of the Jewish people,” Tal writes, “at the very least until pre-World War II numbers are restored.”But Tal’s perspective is heavily jaundiced by his own stereotypes about Israel.He describes the arrival of Soviet Jewry as a “human tsunami”; Moroccan Jews, the author concludes, were “less able to contribute economically to Israel”; and he claims that “Israel’s Ethiopians are unable to change their skin color and blend in like immigrants from earlier waves.”One almost gets the feeling reading this book that if only Jews had all been non-Russian, white Europeans from Germany, then it would have been better to have millions of them. Perhaps it’s not demographics that is the problem, but not having enough white Europeans in Israel? This book is a classic example of how someone can have all the correct data and draw the wrong conclusions. Tal is correct that overpopulation harms the environment.He is correct in discussing how crowded classrooms result in “frustration and disillusionment” among teachers.There is a link between poverty and family size among Beduin and haredim.But the conclusion that Israel is in for a demographic doomsday is misguided.Germany, the supposed model of demographic success, needs migrants because of low fertility. In 2015, when 1.1 million mostly Middle Eastern migrants arrived in Germany, The Los Angeles Times noted that “the nation’s population is shrinking at an alarming rate and it desperately needs” newcomers. The Financial Times wrote that the “country’s aging population is threatening its position as Europe’s largest economy.”Tal claims Israel needs “enlightened public policies” to keep up with the “intoxicating influence” of Western civilization’s progressive birthrates. But every country that has become wealthy and Western, from Japan to Italy, now needs millions of fertile immigrants from the Middle East to “save” them from demographic decline.Not only should Israel not go down the path of Germany, but one solution that’s already taken place is the number of Israelis who have emigrated to the US and EU, and will undoubtedly continue to do so. This will relieve population pressures naturally, as in other countries with high population densities. And why does Israel need a “strategy for limiting the number of Jews,” when Jews are a tiny minority in the world? Let the billions of people in India and China have lower birthrates, Jews can have high birth rates and emigrate.Israel is not the most crowded country – it is 32nd behind South Korea, Lebanon, Barbados, Bangladesh and many others, including the economically successful Netherlands. Tel Aviv is also not the densest city in the world – Manila (41,000 per square km.), Taipei and Seoul are far more crowded. Tel Aviv isn’t even in the top 40 cities by population density. Israel as a whole closely resembles the US northeast’s megalopolis between Boston and Washington, where density is 360 people per square kilometer.Israel is perfectly positioned to be similar to Singapore or the UAE. What it needs is a more dynamic economy and solutions to its housing crises. That doesn’t mean fewer people, it means better policies to plan for them all and to open up the Negev to real development. The land is not full, the land has simply been mismanaged.