Person of the book

Gary Shteyngart talks about the clash of civilizations between lovers of literature and technology, as explored in his dystopian novel ‘Super Sad True Love Story.’

By JORDANA HORN
SEPTEMBER 8, 2010 12:04
Advertisement
Gary Shteyngart is well known for his hilarious takes on the the world of the Russian émigré. But his new book, Super Sad True Love Story, is a maelstrom of satire, fear, humor and love that takes on America itself as its subject, and does so brilliantly.His immigrant past (Shteyngart was born in 1972 in then-Leningrad, migrating to the US with his parents seven years later) was the foundation for his first two novels, The Russian Debutante’s Handbook and Absurdistan. Both reveled in the inherent cognitive dissonance of the immigrant experience, and met with ample critical acclaim. Shteyngart’s writing generally favors wit and satire (a dominatrix named Challah?) over poignant reminiscences about the old country. In Absurdistan, he turned his razor-sharp wit on himself, referencing a book with the title The Russian Arriviste’s Handjob written by Jerry Shteynfarb. In short, nothing is sacred.“There’s only so much you can write about certain things that are very important to you when you’re growing up, the first being your identity,” Shteyngart says to me in an interview. “I don’t think I’ve completely finished that task, but I did it in the first book, and the second book was in many ways an extension of that, though with a different perspective.” 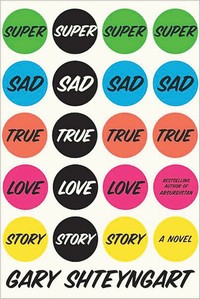 While he’s not planning to completely abandon his Russian Jewish themes, Shteyngart says he’d like to “play a little, and dance around it. America really is the topic with this book, and the love between two people.”On one level, Super Sad True Love Story can described as an immigrant’s story. This time, though, the outsider (while still Russian-American- Jewish) is from another value system. Lenny Abramov, the protagonist, journeys both into a dystopia and a love affair. Lenny lives in the not-too-distant future. It’s a horrid place, where everyone carries around an äppärät – a sort of cracked-out iPhone that reveals your desirability compared to the people around you in language inappropriate for a family newspaper. It’s a world where Credit Poles reflect people’s credit ratings as they walk by, signaling retailers as to who is the best prey.And it’s a world where literature as we know it is extinct. Without the capability of expression that a love of literature confers upon its adherents, love itself doesn’t stand too much of a chance, as evidenced by Lenny’s desperate attempts to “connect” with and love Eunice Park, a beautiful Korean twentysomething who is the object of his affection.“Love is an expression of so many different things,” Shteyngart says. “It’s physical and intellectual, but so much also depends on language and how we talk to each other. We are presenting little advertisements for yourself, especially among a certain caste of people. That used to be a huge theme of novels: How do people fall in love? Love and death are the two great themes of literature. The question the book posits is: How will that work out if language is demoted and there’s an abbreviation patois being used? What will happen?” He admits that he gave himself an edge in the book – Eunice is extremely articulate, her indulgence in abbreviation patois notwithstanding. But the book at its heart is a romp through a clash of civilizations: the lovers of literature versus technology. Can’t we all just get along? “Who knows?” Shteyngart says. “Who the hell knows what the future is going to hold? And the future is now happening at an exponential pace. Technology used to advance very slowly – a horse was still a horse. These days, tech has overwhelmed every other sphere – social, economic and religion.”In one throwaway sentence in Super Sad True Love Story, Shteyngart writes of Lenny that he has “the Jewish affliction with words.” And, in a way, it encapsulates Shteyngart’s entire ethos.“Words aren’t a disease as far as I’m concerned – they’re my livelihood!” Shteyngart laughs. “But I can’t help but think that if something isn’t mediated through language, it’s sort of second class. That whole ‘people of the book’ cliché comes to mind. As a Jew, you’re always going to have readers.”Shteyngart characterizes himself in our interview as “not a religious person at all,” but I counter that, in fact, he is – it’s just that his religion, like Lenny’s, is literature itself.

He thinks it over. “I do think it’s a kind of religion,” he admits. “What’s interesting in reading a book is how upset people can get, how emotionally involved – when people read my books, you come into my mind, go through the halls of my mind. It’s visceral, and that’s exciting to me, that kind of connection.”THE BOOK is extremely funny as well as “super sad,” but at least part of its humor and tragedy stems from its characters’ dependence on their äppäräts, these devices which profess to help connect them with one another, but in fact cripple their ability to express themselves. Truthfully, this concept doesn’t seem futuristic as much as it looks like an all-too-accurate and frightening satire of our Internet- and WiFi-addicted culture.“When I was writing Absurdistan in 2001, tech was just part of the greater world – the world was still the world of human beings, nondigital,” Shteyngart recalls. “Things have changed so rapidly. We’re living in a whole different civilization.”Anyone with a smartphone, or e-mail account, for that matter, can relate to Shteyngart’s simultaneous frustration with and titillation by the “ping” signaling the arrival of new communication, demanding, “Look at me!” “It changes the way we interact,” Shteyngart says of his own iPhone. “It’s addictive. It’s addictive because wherever I go, it’s there, and it’s fighting for my attention, demanding things from me all the time. The information it provides me with constantly is not important enough to take the kind of time and enjoyment away from life itself that it does.”Shteyngart notes that this hyper-technological world is critical to anyone in the creative industry, including authors: “It makes all of us small business people, constantly fighting for an advantage.”For this particular book, Shteyngart had to dive headfirst into the culture, setting up iPhone apps, a Facebook page and doing a YouTube trailer for it.But as we talk, Shteyngart’s depiction of his technological relationship has the vague bitterness of someone who decided to have an extramarital affair that went sour. “Remember when email was in its infancy, and every two or three days, something important would come through?” he asks rhetorically. “Now, what’s happening is that our brains are being taunted by tinier and tinier bits of information, little distractions that force us to respond constantly.”“I don’t even know how to use all the apps,” Shteyngart admits. “It’s a little too much. There’s definitely resistance on my part, but [also] an acceptance that this is now the world I have to work in. But it’s hard! In researching this book, I’ve developed a little bit of a heroin-like iPhone addiction. I need to find ways to switch to methadone. That’s very hard.”Shteyngart implicitly realizes that love for literature will trump technology, or at least wrestle with it and put up a hell of a fight; 140 characters, he says, is simply not enough.“The long form is very important, both in fiction and nonfiction,” Shteyngart says. “It allows for something different to happen, and for the mind to go deeper into the world of ideas. I used to live on the Lower East Side, and passed men studying Talmud. I haven’t had a good experience with the Talmud myself, but I always did envy them the ability to completely sink into a text to the exclusion of everything else. It’s important.“The problem is, that kind of attention is being taken away from us very, very quickly. As a writer, I rely on that ability, and it’s getting harder to find.”
Advertisement
Subscribe for our daily newsletter