"Today low-calorie dishes can taste better than the boring diet food of my childhood because now there is a greater variety of fresh ingredients." 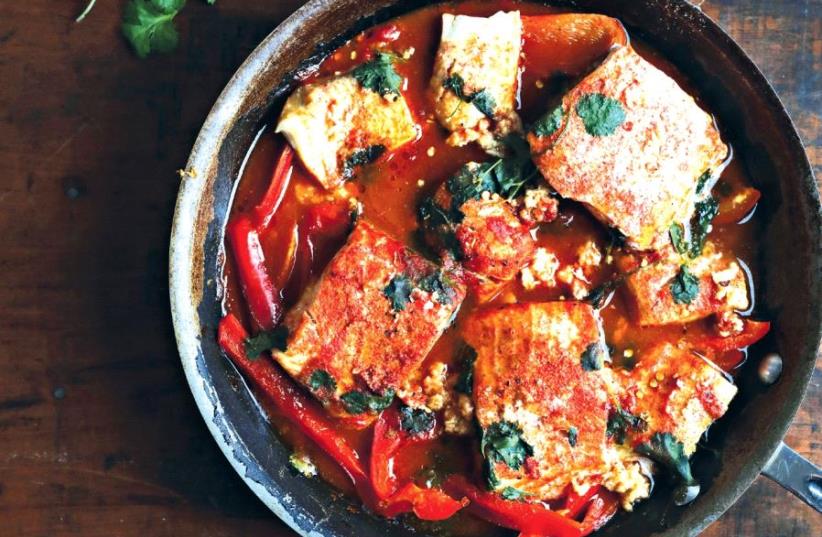 Janel’s Moroccanstyle fish
(photo credit: ESTI PHOTOGRAPHY)
Advertisement
‘There are lots of delicious foods out there. Plenty of recipes with fat and sugar that taste really, really good,” wrote Victoria Dwek, author of the new kosher cookbook Secrets of Skinny Cooking: Mouthwatering Recipes You Won’t Believe are Low Calorie. “But I realized that what people didn’t know... is that light food can be just as satisfying.”According to Dwek and her co-author, nutritionist Shani Taub, the goal of their book is to help people who want to lose weight or avoid gaining it. To do this, they advise preparing meals that are low in calories by minimizing fats and sugar and keeping carbs low.These recommendations haven’t changed much since my high-school friends and I were trying to slim down. What has changed is that low-calorie dishes can taste better than the boring diet food of my childhood because now there is a greater variety of fresh ingredients at the market.Taub, who struggled with weight problems as a teenager, wrote: “I learned my lesson: endless fat-free foods weren’t okay. But the right amount of a variety of foods, in moderation, certainly was. When I visited that first nutritionist, ...she told me I can have pizza – but just one slice. I had to train myself to eat it slowly... so that it would take the same amount of time to eat that one slice as it did to eat those three slices.It gave my brain time to process that I had actually eaten... and that I was actually satisfied. Today, my clients are shocked that they can be so satisfied with less food.”Dwek and Taub provide a variety of tips for making dishes tasty while keeping the calories low, such as caramelizing onions without oil, a technique they use in their mushroom chili. (See recipe.) To brown the onions, you cook them with nonstick cooking spray and salt in a dry covered pan. Once the onions have softened, you continue cooking them uncovered over low heat until they are golden.Roasted vegetables are another preparation that can enhance skinny dishes. To roast vegetables without oil, cut them in pieces, put them on a firm baking sheet, spray them generously with nonstick baking spray and roast them at a high temperature.This is the method used by Dwek and Taub to cook the eggplant slices for their sabih, the vegetable and egg sandwich dressed with tehina. (See recipe.) When making salad dressings, use less oil than lemon juice or vinegar, as in fatoush salad (see recipe); if the dressing is too acidic, add a little water. Another way to make lighter dressings is to blend low-calorie mayonnaise with lemon juice and water. For more flavor, season these dressings with mustard, garlic or herbs.Don’t eliminate carbs, but stretch them, advise Dwek and Taub. Add diced vegetables to a relatively small portion of carbs. Dwek adds diced tomatoes, cucumber and parsley to cooked rice, and roasted strips of eggplant and a roasted red pepper sauce to pasta.For a slimming breakfast, spread protein-packed hummus on toast and top it with Israeli salad; or spread toast with avocado, sprinkle it with shredded fresh basil and top it with light feta cheese or an egg-white omelet. If you like a sweet breakfast, top Greek yogurt (thick, strained yogurt) with fresh fruit, such as peaches and berries, and sprinkle it with low-calorie granola. When you want a breakfast treat, crumble a quarter or half of a muffin into your yogurt.“I believe in a well-balanced plan,” wrote Taub. “...A diet should be a way of life that you can live with forever.... It simply means that you know exactly what you’re eating....In the beginning, I want my clients to use their calories for the most nutrient-dense and satisfying foods. But later on, a diet doesn’t mean not eating a piece of cake. It means knowing that we ate that cake. Even sitting down to enjoy it with a fork.”

Faye Levy is the author of Healthy Cooking for the Jewish Home.