By OFER LIVNAT/MAARIV
ACCORDING TO Or Yarok, from 2014 to 2017, the number of accidents involving electric bicycles tripled.
(photo credit: TED EYTAN/FLICKR)
Advertisement
Last year, some 288 teens between the ages of 16 and 18, and 248 between 12 and 15, were injured in Israel while riding electric bicycles. A few weeks ago, the entire country was shocked to hear that a teenager – Ari Nesher, son of acclaimed film director Avi Nesher – was critically injured while riding on the back of his friend’s electric bicycle, and died a short time later, just one day after celebrating his 17th birthday. The accident brought to the forefront of public discourse the issue of lack of regulation of electric bicycle riding, especially among teens. A number of proposals for legislation, enforcement and regulation of electric bicycle use have been raised by various lay people and politicians.Until a specific policy can be set, every day more accidents involving electric bicycles will continue to take place. Many are not reported; only the most horrific ones make the evening news. More and more electric bikes are appearing on Israel’s streets and most of the riders are teenagers. Unfortunately, not all of them ride their bikes sensibly, wear helmets or have lights. Has the news of this tragic fatal accident affected their riding habits? LIHI TARAN, an 11th grader at Tel Aviv’s Ironi Dalet High School, has been riding her electric bicycle for a long time. Following the recent accident, Taran began wearing a helmet every time she rides her bicycle.“I used to ride without a helmet, but after hearing about Ari Nesher’s accident, I went out and bought a quality helmet. Despite everything that’s happened, riding an electric bike still has many advantages if used properly. I’ve heard lots of people say that electric bikes should be outlawed altogether, but if you wear a helmet and follow traffic laws, it’s possible to remain safe. But as long as there are no bike paths to ride on, it will continue to be dangerous. There are sidewalks for pedestrians and streets for cars, but where are the cyclists supposed to ride? Everyone tells us, ‘There are no bike lanes. Just find somewhere to ride.’” Are you frightened while you’re riding your bicycle? “Absolutely! I’d much rather ride in a bike lane, but there aren’t any, so I’m forced to ride on the street, which is an incredibly frightening experience – especially when a bus passes me by. I try hard not to ride on main roads like this because it’s very stressful, but sometimes I don’t have a choice.”Did your teachers talk with you at school about safety precautions? “After the accident, they brought it up a bunch of times. Two students who are friends with the boy who was injured in the accident – Ari’s friend – came to speak with us about the importance of wearing a helmet. I went straight out that day after school to buy a helmet. Everyone tells themselves, ‘It won’t ever happen to me,’ but then all of a sudden it happens to someone your age, and you realize the importance of safety.”What do your parents think about you riding an electric bike? “My father’s very worried about me, and he’s thrilled that I bought a helmet. If there’s space on the sidewalk, I ride on the sidewalk even though I might get fined, because getting fined is much better than getting run over and risking my life.”N., AN 11th grader from Herzliya, admits that despite learning about all the fatal accidents, she and her friends still don’t wear helmets.“But we are being much more careful in the way we ride and we never take a friend on the back anymore. I’m super scared of riding on the streets, but there aren’t any bike lanes, so I don’t really have a choice. It’s really convenient getting around on an electric bike.” 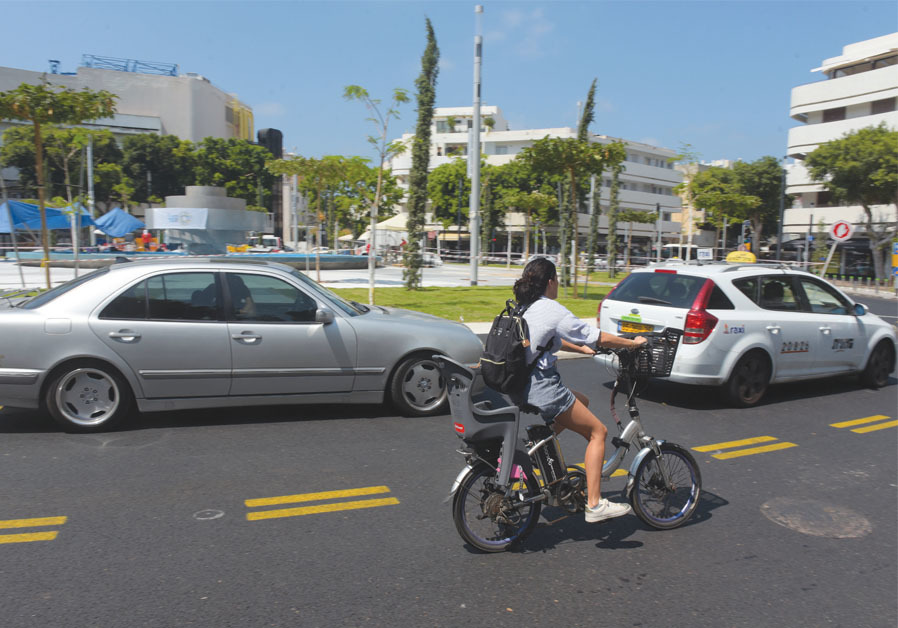 ‘I UNDERSTAND that there are kids who are really crazy riders, but the people driving cars also need to take some responsibility.’ (AVSHALOM SASSONI)CHANI DAVIDI, 16, an 11th grader at Reishit-Amit High School in Tel Aviv, has been riding an electric bike for two years already.“It’s the easiest way to get around without having to rely on my parents,” says Davidi, even though she’s already had a few falls. “I’m much more careful now, and I’ve learned from each of my falls. A policeman came to our school and spoke about road safety. I used to take friends on the back of my bike all the time, but since the policeman came to school and told us about all the accidents, I don’t do that anymore.“I understand that there are kids who are really crazy riders, but the people driving cars also need to take some responsibility. So many times when I’m riding my bike a car will cut me off suddenly without signaling. It’s absolutely frightening when this happens, and so I only ride on the right side of the road.”Aren’t you afraid of being involved in a serious accident? “People driving in cars should also be worried.”LIEL MALCHEVICH, the chairperson of the National Student and Youth Council at the ORT Sharett High School in Upper Nazareth, said, “In light of recent events and for the purpose of preventing future incidents of this type, we’ve submitted a firm appeal to the Transportation Ministry, to the National Road Safety Authority, and the Or Yarok Association for Safer Driving in Israel in order to solve this problem.“We don’t oppose the use of electric bicycles in principle, since they are a very convenient form of transportation. At the same time, we must understand the safety concerns and the procedures surrounding bicycle riding. It’s integral that enforcement be unequivocal when dealing with lawbreakers – both with drivers of vehicles and cyclists. Every illegal action will have consequences. Moreover, we here in the Council are also coming up with new plans of action, such as organizing a campaign involving presentations to students at schools. But it’s important that we also make it clear that riding electric bicycles can be a positive experience.”According to Or Yarok, from 2014 to 2017, the number of accidents involving electric bicycles tripled from 692 to 2,185. Moreover, a third of the people injured were children or teens. According to the Science and Technology Ministry, 37% of youth do not know the speed limit for electric bicycles and 30% are not aware of the law that requires cyclists to wear a helmet (73% say they ride without a helmet). It’s also interesting to note that boys wear helmets less than girls, and the older the riders, the less likely they are to wear a helmet. 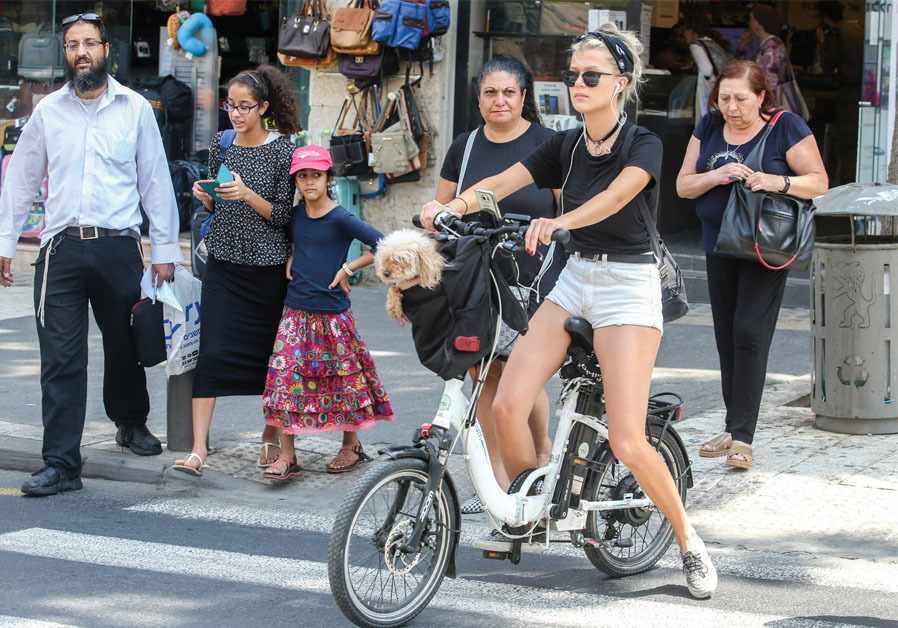 ‘IF YOU don’t know the traffic rules or how to ride safely, then you’re a danger to yourself and those around you.’ (MARC ISRAEL SELLEM)“IN MY opinion, enforcement needs to be more clear-cut. We also need to make inroads regarding helmet use – people can be hurt and die if they fall off their bicycles,” said S, a 12th grader from Tel Aviv who does not himself ride a bicycle since there’s no infrastructure in his area that allows him to do so safely.“Every time I’ve ridden my bicycle to school, even if there’s a bike lane, I’m always fearful that someone will come up behind me on the sidewalk and I’ll get hurt. I guess I’m pretty paranoid. It’s just that I’ve heard so many stories about accidents with electric bikes.”YONATAN BROSILOVSKY, a 10th grader from Herzliya who rides a regular (non-electric) bicycle, agrees with S. Brosilovsky thinks the solution would be to require people to have a license to ride an electric bicycle, or at least something that would require riders under 16 to take a course.Why do you ride a regular bicycle and not an electric bicycle? “For a few reasons. First of all, I’m not 16 yet, and anyway I don’t really want to. I like biking as a sport and I think electric bike riders should have to have a license. Anyway, my parents wouldn’t let me.”Do any of your friends ride electric bicycles? “Yes. Only a handful of friends and I ride regular bikes. Everyone else has an electric bike. I use my bike mostly for sport – I take the bus to school. There really aren’t any bike lanes, or even sidewalks where I live, so it’s not a great place to ride a bike.”Brosilovsky thinks that the kids under 16 who are caught riding an electric bicycle are given illogical tickets. “Every few months a kid under 16 is caught and has to pay hundreds of shekels – ridiculous amounts.”Do you and your friends wear helmets when you ride your bicycles? “I do. My parents say I have to and anyway I would never ride without one. I know it’s ugly, but I don’t care.”It sounds like you’re not the typical bicycle rider.“I guess it boils down to how you were educated. I was taught to be careful. I don’t think the way to fix the situation is by increasing fines. The way to go about this is to educate the community. If you don’t know the traffic rules or how to ride safely, then you’re a danger to yourself and those around you. Young people must listen to the adults on this issue, and take responsibility for themselves. We need to start a discussion and get young people involved in a campaign to raise awareness. Young people need to prove that they are involved in the community and are responsible individuals.”Translated by Hannah Hochner.