This Remembrance Day, on her yearly visit to Mt. Herzl Military Cemetery, Miriam Peretz will have to choose which of her fallen sons to mourn first. 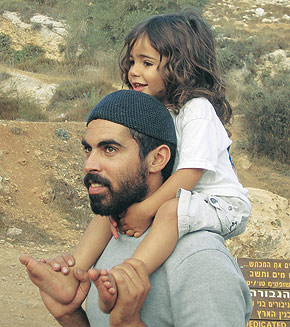 2005 evacuation. They then built a home in an outpost on the outskirts of Eli, out of a deep belief that Jews had a right to settle there. Their house is one of 12, against which there is a demolition order from the civil administration.Eliraz was one who always believed things would turn out well. He was drawn to the happiness in life. In contrast, Miriam says, her husband never got over Uriel’s death. Within a year he had a heart attack. Five years ago, he died. But just before his death, Eliezer decided they should embark on renovating and enlarging the house.Once it was done after his death, her children insisted, that from here on in, the tone of the house had to change from mourning to one of celebration. But they managed only one happy event, her daughter Hadas’s wedding.Miriam says that even when her brother died earlier this year, she sat shiva elsewhere in hopes of preserving a happier tone in the house. For the first time since Uriel’s death, she stopped going to visit him weekly. As she sat by his grave, she apologized, but said it was important to refocus her energies on the living.“I had my plans. God had his,” she says. “The two did not meet.”IT HAD already been difficult, she says, as she now sits in the new living room, to focus on two anniversaries of death. The entire year is marked by the time between them.Now with all three, she does not how she will do it.“It would have been better if everyone had died at once,” instead of this continual wave of death, she says. For her younger children, she says, it was as if they had lost their father for a second time. Eliraz had immediately stepped in to fill Eliezer’s shoes. They sought his advice on everything.She is torn, she says, between deep pain that she does not know how to overcome and her strong commitment to the continuation of life, part of which comes from Eliraz himself.When she last saw Eliraz, it was Purim and he spoke with her about building a new life away from death, and possibly even her remarrying.In retrospect, it was as if he had left her with an order to live.It was not the first time he had given her that message. To explain her point, she takes two stones out of the cabinet in her living room. In late November 1998, Uriel was in Lebanon with his men. He told them to lie on the ground and he climbed up on a boulder to survey the scene. At that moment six explosions went off. He and another soldier were killed on the spot, recalls Miriam.After a month, his commander brought her a piece of that boulder.“The stone is burned. It smells of disaster, fire and blood. I have held it in front of me. Whenever I missed Uriel or I feared he was slipping away from me, I would take out the stone and put it on my heart,” she says, and holds it up to her chest.“I would feel the moment he was killed. I would wonder, did he call out to me in that moment?”Eight years later, when he was in Lebanon, Eliraz asked for permission to go back to the spot where Uriel was killed. He brought home a piece of that same boulder. But this stone is white. It still has some sign of the fire, but it does not engulf the stone.Eliraz asked her to place the burned stone in a box and to remember Uriel instead through the new stone.Since Uriel’s death, he said, “the rain has fallen, the sun has shone, plants have bloomed around it [the boulder]. Nature and the world have continued.”It is this new lease on life that she should hold close to her heart, he said.“But what of the fire?” Miriam asked.“From time to time look at the stone and you will see that it still has remnants of the fire,” he said.Since then, she has kept the burned stone in a small ivory box, and the white one outside of it. “When they build the Third Temple, everyone will donate something. Somewill give money, others will work. I want to put these two stones inthe foundation of that Temple,” says Miriam.She adds that for her, “these two stones symbolize Jewish existence. Itwas always filled with fire and pain but also with hope. These twostrands have always been bound together. And the lives of my childrenhave symbolized this existential battle.”