Haredi girls in J'lem learning Classical music are now able to earn BAs and turn their passions into parnassa.

By DAVID BRINN
FEBRUARY 5, 2010 18:19
haredi girls piano 311
(photo credit: Ariel Jerozolimski)
Advertisement
A visit to the Ron Shulamit Music Conservatory in the haredi Har Nof neighborhood of Jerusalem may not melt away the animosity an anti-haredi feels toward the community, but it will certainly force him to use more than one flashlight when illuminating its largely veiled world. Besides training haredi girls to play and teach classical music and opening the doors for potential careers in the arts or music education, the 15-year-old institution is slowly changing perceptions – that of the girls and their families toward the outside secular world of culture, and also of society’s accepted but tainted view of the haredi world as a backward society where culture is disdained and scorned.Maybe somewhere, a middle ground exists where the truth lies. And if the Ron Shulamit conservatory is involved, then surely there’s music playing.“It’s a quiet revolution in the heart of the ultra-Orthodox community of Har Nof, as well as in broader Jerusalem and beyond,” says Shira Barzily, the young, energetic outreach manager of the conservatory, as she leads me into Har Nof’s Beit Ya’acov elementary school, where the conservatory exists after regular school hours.There, some 500 female students, ranging in age from seven through adulthood, immerse themselves in the world of classical music.For a quiet revolution though, it sure is noisy. The sounds of string instruments being tuned, piano scales being played and accordions meshing in various combinations seep through classrooms in all corners of the old-fashioned school. A look inside any of the rooms will reveal not starchy, mustached egghead musicians, but young, innocent-looking girls in long skirts, long shirts and ponytails.It’s no secret that you don’t have to be a pure person to create wondrous music – in fact you can be a horrible human being. No need to look any further than Richard Wagner or Ike Turner for examples of that. 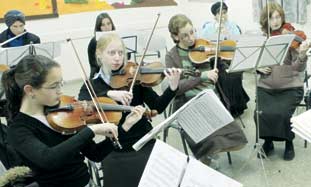 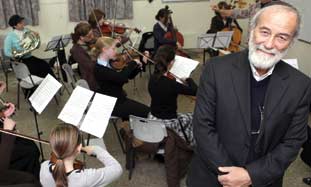 With hearts still pounding, we leave the rehearsal room and return to Chasid’s office.“The success is something that until today I don’t understand. It’sextraordinary. The development of the girls, and the integration oftheir families in the development has produced different people.They’re much richer – richer in the good things in the world,” he says.Helping Chasid achieve his dream of emancipating haredi familiesthrough music is Naomi Perl, the director of the conservatory’s BAprogram. A graduate of the Mandel Leadership Institute, Perl sees musicas a means of achieving dialogue between different social groups. Andshe’s seen as the heir apparent to take over from Chasid as he movescloser to retirement.“Talk about loneliness, I felt very alone as a child – nobody else wasplaying music,” says Perl, who was raised in a haredi environment butstudied at the Rubin Academy. “When I saw an ad in Hamodia back in 1994 looking for teacher for a new conservatory for haredi girls, I knew that it was for me.”“Naomi’s the one that worked intensively with the Levinsky Institute toget our BA program recognized, because she wanted the girls to have adegree at the end of their studies so they could go and work,” saysBarzily. “Students in their teens would say to Naomi, ‘Why are youdoing this to us – giving us this knowledge with nowhere to take it?What are we going to do now? We can’t go to a regular school and get aBA.’ And enough students came and demanded it, which was also anindication of the love of music that was being built.”The students don’t just stay sequestered within their classrooms. Theconservatory’s outreach includes performances at nursing homes,community centers and schools where they’ll often provide a firstintroduction to classical music. The orchestra also performs annuallyat the Mishkenot Sha’ananim Music Center, and has won the prestigiousKeren Sharet prize.The only fly in the ointment is that even though it reaches out to theoutside world, the Har Nof conservatory is only stretching its hand toa feminine recipient. But even though performances in front of men,including fathers and siblings, is forbidden, Chasid is convinced thathis music conservatory has found the lost chord of coexistence.“I think if the public knew about what we’re doing, it would have apositive effect on religious-secular relations in the country. I’venever heard that there have been wars fought over music. Music, in thisrespect, is a fantastic tool. There are no differences of opinion.”