"Surrounded by a small group of rather bemused villagers in this rural and isolated hamlet, a group of Rabin family and friends gathered together in the local community center." 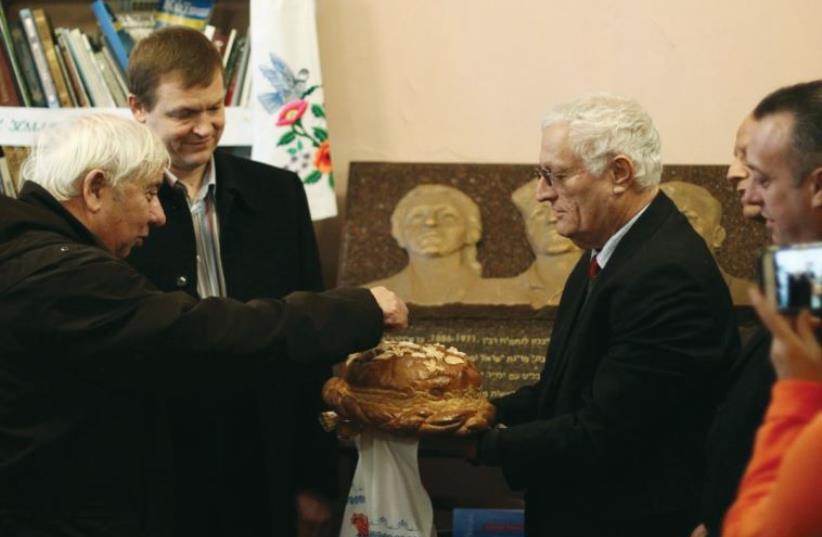 Limmud FSU founder Chaim Chesler holds a halla while Eitan Haber, former chief of staff for Yitzhak Rabin, sprinkles salt in a Russian tradition for good luck at the inauguration of the memorial
(photo credit: BORIS BUKHMAN)
Advertisement
On November 4, on the 20th anniversary of the assassination of prime minister Yitzhak Rabin, an unusual event took place in the village of Sydorovychi in the province of Ivankiv in western Ukraine, not far from the Polish border and just 50 km. from the town of Chernobyl.Surrounded by a small group of rather bemused villagers in this rural and isolated hamlet deep in the chernozem, or black soil of Ukraine, on a bleak and chilly autumnal day, a group of Rabin family friends, together with Eitan Haber, the late prime minister’s bureau chief and spokesman, and activists from the Limmud FSU (former Soviet Union) educational movement, have gathered together in the local community center of the small hamlet.The occasion is to unveil a memorial plaque carrying the bronze image of Nehemia Rabin the father, flanked by his two children, Yitzhak and Rachel.The bas-relief sculpture was commissioned by a Ukrainian artist who based the work on an iconic photograph in the Rabin Center in Tel Aviv. 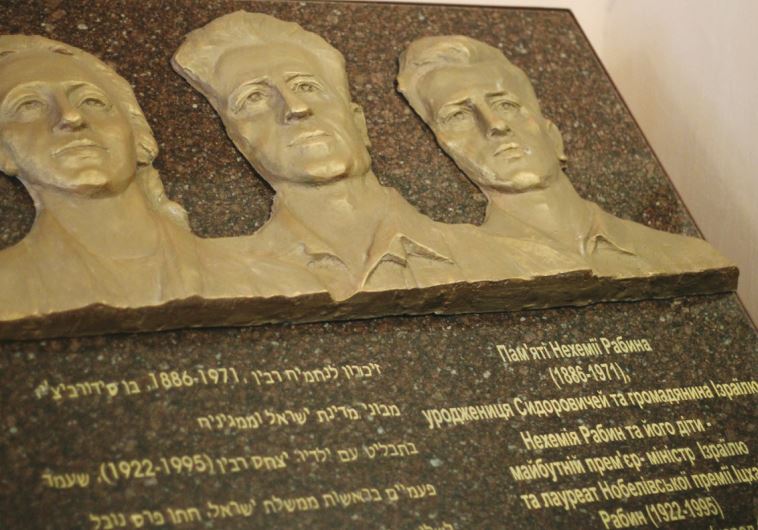 The memorial plaque carrying the bronze image of Nehemia Rabin the father, flanked by his two children, Yitzhak and Rachel. (photo credit: Boris Bukhman)At the event, the governor of Ivankiv province, Anatoly Sviridenko, was at pains to draw a comparison between Israel and the crisis between Ukraine and Russia.“Our country is being torn apart and we are fighting for our independence just as you did in 1948, and we hope that sanity will prevail,” he said. “You have your own land and we want to ensure ours.”Gennady Polischuk, the director for Ukraine and Moldova of Nativ, the once-clandestine Liaison Bureau in the Prime Minister’s Office that deals with the Jews in the FSU, said, “the dreams of Nehemia came to fruition through the lives of his children – dreams that were halted through three fateful shots. It is our responsibility to pass a message to the next generation so that history does not repeat itself.”Chaim Chesler, founder of Limmud FSU who had headed the Jewish Agency delegation in the FSU in the 1990s, remembered that he was called by Haber who told him that the prime minister was due to make an official visit to Russia. Chesler recalled that he had arranged that the prime minister would visit the Moscow Choral Synagogue and “the usually stoic and unemotional general melted when a group of first year schoolchildren danced the hora with him and I actually saw a tear in his eye. Later on when he opened the new Jewish Community Center in Kiev, I realized his deep connection to his Russian roots.”Some five years ago, Chesler embarked on a mission to locate the birthplace of Nehemia Rabitzov, the father of the prime minister, even though the Rabin family thought it was impossible because the Ukrainian authorities said the village had been destroyed in the Second World War. He pored over maps and documents in Ukrainian archives and old family documents and eventually located it – as was then confirmed by Rachel Rabin, Yitzhak’s sister, who lives on Kibbutz Menara, who checked Nehemia’s old Russian passport and found that Sydorovychi was indeed listed as his birthplace. 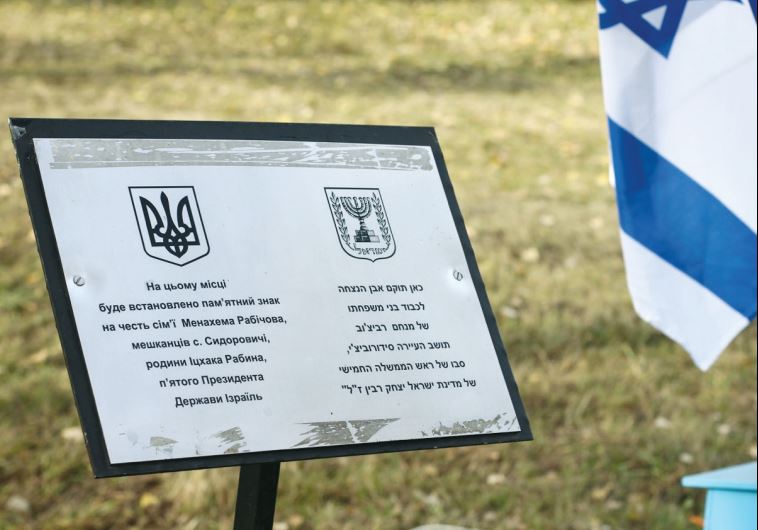 A plaque in Ukrainian and Hebrew, inaugurated by Yuval Rabin in 2010 outside the Sydorovychi cultural center. (photo credit: Boris Bukhman)In this village, with barely 200 inhabitants today, Nehemia was born in 1886, and in 1905 left for the US, subsequently changing his family name to Rabin. In 1917 with a group of young volunteers from the Jewish Legion, he moved to then-Palestine and worked at the Palestine Electric Company. There he met and married a fiery activist and fervent communist called Rosa Cohen (known as “Rosa the Red”), who had been born in Mogilev, Belarus, in 1890 and had become disillusioned by the Russian Revolution and became a leader of the labor movement and the first commander of the Hagana in Haifa in pre-state Palestine. Their eldest son, Yitzhak, was born in Tel Aviv on March 1, 1922.In 2010, in the presence of Yitzhak Rabin’s son, Yuval Rabin, a memorial plaque, in Ukrainian and Hebrew, was unveiled outside the cultural center of Sydorovychi. The village had one street where Jews lived, including the Rabitzov family, headed by Menahem, the father of Nehemia. Today in the whole area there remain barely 50 Jews, none of them in Sydorovychi itself.In the first week of November, a Limmud FSU conference took place in Lviv, Ukraine, for the second time. Eitan Haber and other friends and colleagues of the late prime minister shared their reminiscences with an audience of some 700 mostly young Russian-speaking Jewish Ukrainians. Their talks were among more than 150 presentations, lectures, discussions, workshops, master-classes, cultural events and performances as part of a packed three-day weekend of Jewish learning, culture and history.
Advertisement
Subscribe for our daily newsletter