Just a Thought: On sirens

In an age in which our attention is divided by so many distractions, I am grateful for the sirens to force me to just “think.” 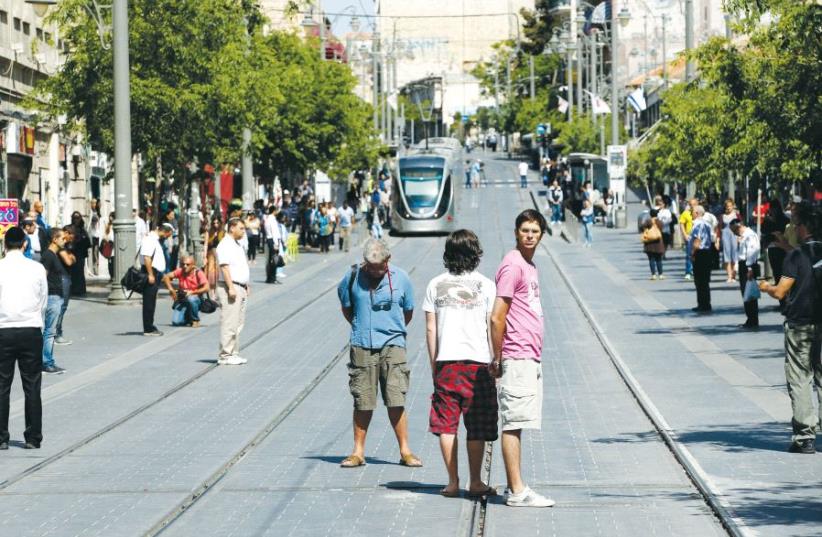 People stand still as a two-minute siren is sounded marking Holocaust Remembrance Day in Jerusalem, 2014
(photo credit: REUTERS)
Advertisement
I come from a retail family. My father and his father before him ran a mattress and furniture store on Staten Island for about 70 years. Coming from a retail family, the holidays are defined by the sales that occur that day. For me, US Memorial Day had little connection to the sacrifice made by American men and women in uniform who died for the freedoms, bounty and good that America provides. This wasn’t unique to my retail family, but rather was part of the larger consumer society that defined and continues to define America.When I came to Israel more than 20 years ago, I was, for the first time, deeply moved by the significance and meaning of Israel’s Remembrance Day. I had of course heard about the sirens and how the whole country comes to a complete stop, even road traffic on the major highways.It truly is an incredible thing to behold. YouTube videos of the event do not do justice to actually being there to witness the phenomenon. You do not just “hear” the sirens here. They echo and resonate throughout your whole body in a way that I cannot quite capture into words.Some overly pious Jews deem the sirens “goyish.” They see a moment of silence as a wasted opportunity. Why should one remain silent when they can pray or do some other mitzva? The truth is that a moment of silence is in fact very Jewish, it is just known by another word: kavana, intent. The Talmud teaches that the ancient pious ones would sit and contemplate God for an hour before they would pray. For thousands of years the Talmud and rabbinic discourse has spilled much ink discussing the importance of intent and it being a necessary component in the fulfillment of mitzvot. The reason of course is that while both man and animal are creatures of action, it is the intent that man has that differentiates him from the rest of creation. Mindfulness, the ability to contemplate ourselves and our surroundings is the hallmark of our humanity. All of Judaism educates us to this end. The sirens, like the shofarot, bring us to this contemplative state. In fact, what we do upon hearing the siren is called “standing at attention,” not “standing idly by,” because we focus our attention to the loss. We think of individuals whom we knew personally and we think of the stories of the heroes and of the sacrifice made by more than 22,000 men and women who were killed.It’s also hard not to think about the sirens heard a week earlier on Holocaust Remembrance Day. The contrast between the two is almost impossible to ignore. This is why Yad Vashem was established on the Mount of Remembrance, opposite the Mount Herzl Military Cemetery.They are two sides of the same coin. Both memorialize Jewish loss. On the one side of the mount we memorialize the six million who were killed because there was no Jewish state, and the other memorializes the tens of thousands killed in defense of one.The difference in “price” only helps us appreciate the value of the Jewish state and the sacrifice made by those who fell. I remember during my own service in the IDF that during some of the most difficult and excruciating moments, I kept in mind that the pain I was suffering then was nothing in comparison to the pain suffered by Jews in the Holocaust, and that I was privileged to suffer this pain in an Israeli soldier’s uniform in order to prevent another Holocaust.That is why, in an age in which our attention is divided by so many distractions, I am grateful for the sirens to force me to just “think.”Yet, even more surprising to me than the effect of the sirens, is the palpable solemn mood that descends on the country. Cafes, restaurants, cinemas and other places of entertainment are closed. Remembrance Day here informs and infuses everything, filtering into the very music on the radio and documentary videos on television. As an avid podcast listener and Netflix viewer who cut the cord about 10 years ago, it is the one day a year, along with Holocaust Remembrance Day, that I listen to the radio and watch Israeli TV broadcasts (online of course).Along with the great many panel discussions and documentaries about Israel’s wars and the stories of individuals lost, there is a channel, made famous by the television show The West Wing, on which every name of every one of the fallen is pictured, one after the other all day long.“A name flashes on the screen for a second or two, then the next name appears. You go to bed, you get up, the names are still flashing. It takes 24 hours. That’s how they observe Memorial Day.”

The writer holds a doctorate in Jewish philosophy and teaches in post-high-school yeshivot and midrashot in Jerusalem.
Advertisement
Subscribe for our daily newsletter