Jerusalem is holy to three religions: Judaism, Islam and Christianity.

AREA G.
(photo credit: KOBI HERATI)
Advertisement
Cooler temperatures make this the perfect time to visit Jerusalem.Most Israelis constantly hear about the capital’s cultural, ethnic and religious conflicts in the news, but have not actually spent much time visiting the city or experiencing any of its many interesting sites firsthand. There are so many significant historical tidbits to learn about the ancient and modern capital of Israel, such as who built the first wall around the city and when was it destroyed.Jerusalem is holy to three religions: Judaism, Islam and Christianity. One of the best ways to learn about the history of this fascinating city is by visiting the City of David, located near the Western Wall. About a half a million people visit this and other heritage sites in Israel every year. At the City of David, visitors have an opportunity to really engage with history and walk above the same streets where Jewish kings and prophets once walked.The excavations that have been taking place at the City of David have exposed a number of archaeological and cultural treasures, such as Warren’s Shaft, the Spring House and Hezekiah’s Tunnel, all of which can be viewed up close during a tour of the site. In addition, visitors can benefit from the incredible panoramic views of the ancient city available from inside the City of David. Included in the tour is the viewing of a 3-D film that tells the story of Jerusalem and describes the many findings you’re about to see at the heritage site.I recommend starting your visit of the City of David by climbing up the stairs to the roof of the observatory house and looking out at the panoramic view below you of the area just south of the Temple Mount. You can see Mount Zion, East Talpiot and the Mount of Olives. 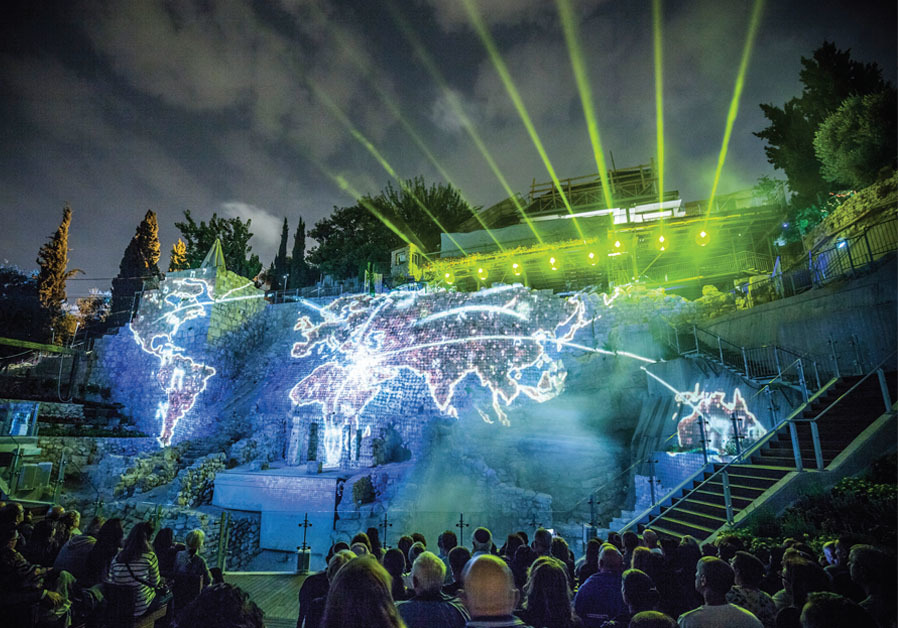 THRILLS ABOUND after dark: View ‘Hallelujah.’ (KOBI HERATI)
When you’re standing there, it’s really easy to understand why this hill was chosen to be the central focus of the Jewish city in the 18th century BCE. You can see that it’s located between two valleys, which serve as a natural line of protection against intruders. It is also close to the Gihon Spring, one of Jerusalem’s most important water sources. Some historians believe, however, that the City of David was established on that spot since it was the border between the tribes of Judah and Benjamin, and that David wanted to unify all the tribes of Israel.When you’ve finished taking in the view, climb back down the stairs and continue on to David’s Palace, one of the excavations that’s shaken up the archaeological world. Dr. Eilat Mazar determined that the remains of the impressive building that was uncovered were in fact part of the palace of King David. In archaeology, there are always conflicting opinions, and so of course some experts disagree with Mazar’s solid findings. But one thing is for certain: The two seals that were found during excavations and were used to sign documents bear the names of two of King Zedekiah’s ministers and tell the story in no uncertain terms of Jerusalem on the eve of its destruction by the Babylonians. Next, the tour continues to the central administration building, which the archaeologists have named Area G.Although the name Area G makes it sound like a closed military area, it’s merely the code that was given to this section in the 1980s by archaeologist Yigal Shilo. Shilo uncovered an incredibly impressive terraced stone structure that stood 12 meters high, with the remains of residential homes on the hill above it. The homes date back to the First Temple period, and in one of them a shard of pottery was uncovered which bore the name Ahiel, as well as seals belonging to various professionals. From these findings, it appears that wealthy people lived in this quarter. 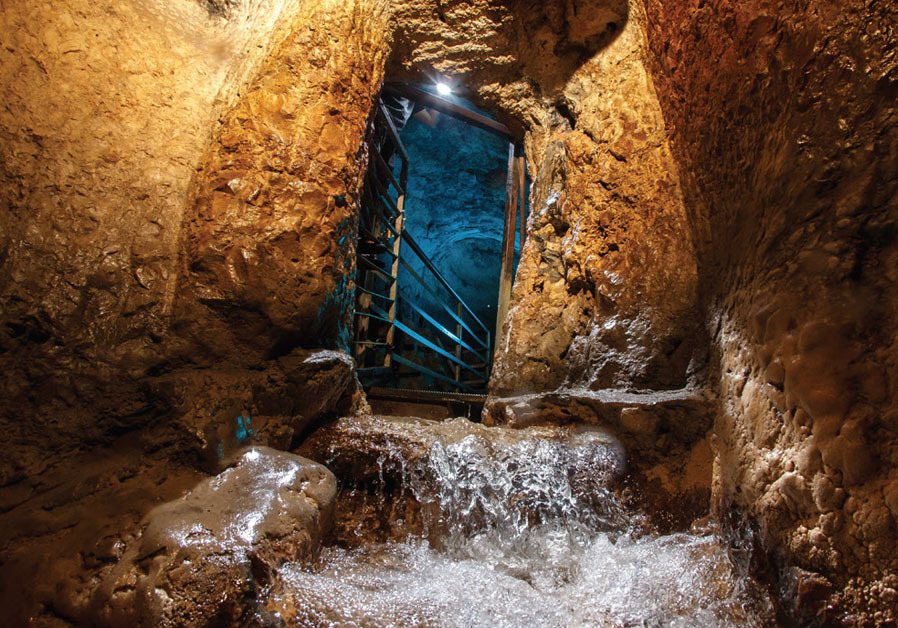 HEZEKIAH’S TUNNEL was used to channel water from the Gihon Spring to the Shiloah Pool. (ELIYAHU YANAI)
In Area G, you can also view the oldest toilet ever discovered in Jerusalem. The stone toilet is estimated to be about 2,700 years old. Next to it, a burned structure was uncovered, which contains arrowheads that tell the story of the destruction of the Temple.Next, walk down the stone steps until you reach Warren’s Shaft, which was named after Charles Warren, the British engineering officer who first uncovered it in 1867. The underground passageway is the upper section of the water system that functioned as the city’s main water source by conveying water through a tunnel that had been dug out, leading directly from the Gihon Spring.Hezekiah’s Tunnel was used to channel water from the Gihon Spring to the Shiloah Pool, from which residents would draw their drinking water. Water from the spring, which is located just outside the city limits, seeped into the narrow crevices of the karstic spring. Each time the space filled up with water, the water would flow out of the spring.Hezekiah’s Tunnel was most likely hewn by King Hezekiah in preparation for the Assyrian siege of Jerusalem, in an effort to move access to the water source inside the city’s limits. A walk through the 500-meter tunnel, which was dug out simultaneously from both ends, is now incorporated into tours at the City of David. As you wade through the water on this mystic experience, you can use your flashlight to see the marks on the walls of the tunnel left by the stonecutters. The deepest part of the tunnel is 70 cm. high, so be ready to get wet. At the end, you can either make your way back by foot or hop on a shuttle that will transport you back to the entrance to the site.Second Temple period Now that we’ve been introduced to the world of the First Temple period, it’s time to move on to the Second Temple period and King Herod. Directly under the main street of ancient Jerusalem lies a tunnel that was used by rebels in the years leading up to the destruction of the Second Temple. During excavations of this tunnel, which reaches all the way up to the Kotel, ancient cooking vessels, a Roman sword and a gold bell were discovered. Finding all of these items gives us a peek into the lives of the ancient Israelites who lived in ancient Jerusalem thousands of years ago. The tour ends at the Western Wall, from which you can continue to the nearby Davidson Archaeological Park.City of David by night If you’re interested in touring the City of David after dark, the site offers a thrilling cinematic presentation called “Hallelujah,” which tells the story of the rebirth of ancient Jerusalem through the use of innovative technology on the ruins of the City of David.Details: www.Cityofdavid.org.il Translated by Hannah Hochner.