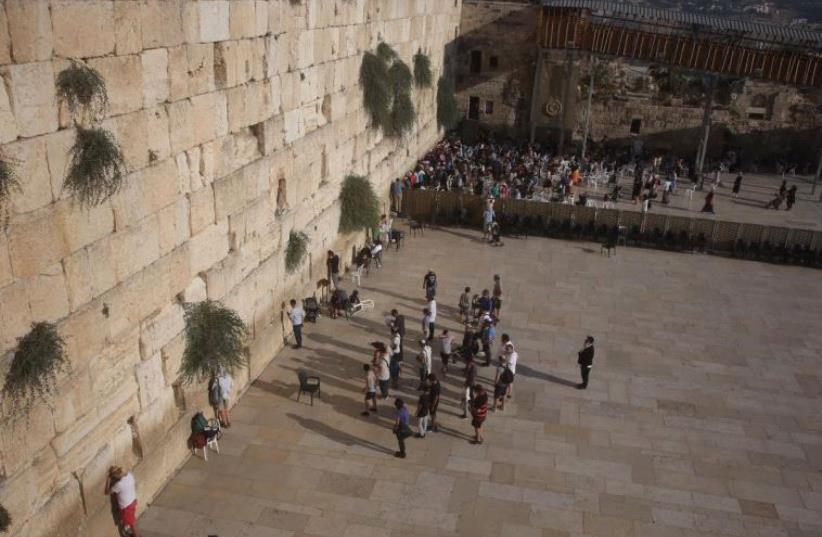 Kotell
(photo credit: MARC ISRAEL SELLEM)
Advertisement
A significant majority of Jewish Israelis would like there to be a site for egalitarian prayer at the Western Wall, near Robinson’s Arch, according to a Smith Research poll taken for The Jerusalem Post Magazine.The poll found that 61 percent of Israelis favor creating such a site, 39% oppose it, and there is no difference in support between men and women.While 83% of Orthodox respondents oppose creating the site, 82% of secular Israelis and 59% of those who define themselves as traditional support it.There was more support among older Israelis than younger respondents. Among those 50 and over, 66% back creating the site. Among those under 30, just 51%.The poll found that the younger Israelis are, the more supportive they are of the current Orthodox monopoly on issues like marriage and divorce.A majority of Israelis – 54% – oppose the monopoly, while 46% support it. Among respondents who are 50 and over, 57% oppose the monopoly, a higher percentage than among the general population of Israel.

But among those under 30, there is a majority in favor of the monopoly, 54%, with 46% opposing it.The more conservative numbers among young Israelis can be explained by the higher birthrate in the haredi (ultra-Orthodox) and national religious sectors.Some 25% of first graders are haredi, and polls find that the younger Israelis are, they tend to be more conservative on matters of religion and state and more right-wing on diplomatic issues.Ninety percent of Orthodox Israelis favor keeping the Orthodox monopoly on matters of religion and state, 61% of self-defined traditional Israelis accept the monopoly, while only 18% of secular respondents said they were in favor.Among those who responded that they are in favor of maintaining the Orthodox monopoly, only 37% are in favor of creating an egalitarian prayer site at the Western Wall. A hefty majority of those who responded that they oppose the Orthodox monopoly – 81% – were in favor of creating the site.The view of self-defined traditional Israelis is surprising, because while 61% say they back keeping the Orthodox monopoly, 59% favor creating the egalitarian prayer site. The contradictory views of traditional Israelis are even more obvious in a question asked in the poll about allowing the Reform and Conservative movements to perform weddings and conversions.In the general population, 62% are in favor and 38% opposed.Nearly all Orthodox respondents are against allowing the Reform and Conservative movements to perform such life cycle events, 87% of secular Israelis are in favor.Sixty-two percent of traditional respondents said they were in favor of opening the door to such religious pluralism, even though nearly the same percentage said they back keeping the Orthodox monopoly.Among the respondents who back keeping the Orthodox monopoly, a higher percentage support creating an egalitarian prayer site at the Western Wall – 37% – than back permitting the Reform and Conservative movements to perform life-cycle events – 33%.“The Kotel is a theoretical issue that is less personal than a wedding that creates issues of who is a Jew later on,” said Rabbi Joel Oseran, vice president emeritus of international development at the World Union for Progressive Judaism, the international umbrella organization of the Reform, Liberal, Progressive and Reconstructionist Jewish movements. “The Kotel has been in the news so much. Maybe Israelis are just more comfortable [with changing the Kotel’s status] than the wedding issue, because they have had time to adjust.”The poll was taken on August 31 and involved 500 Israelis representing a sample of the adult Jewish Israeli population. It has a 4.5% margin of error.