Saudi Arabia juggles terrorist threats on its soil and an abysmal human rights record while its people study Hebrew in university and women battle for equal rights. 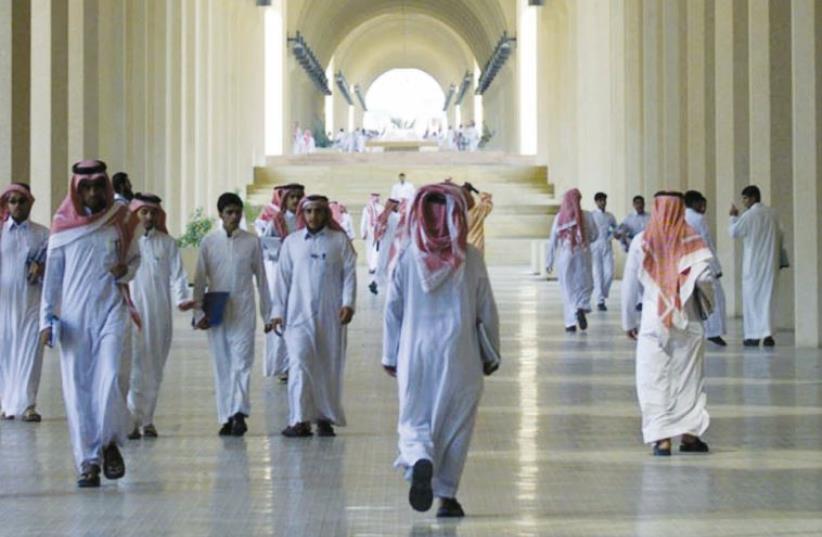 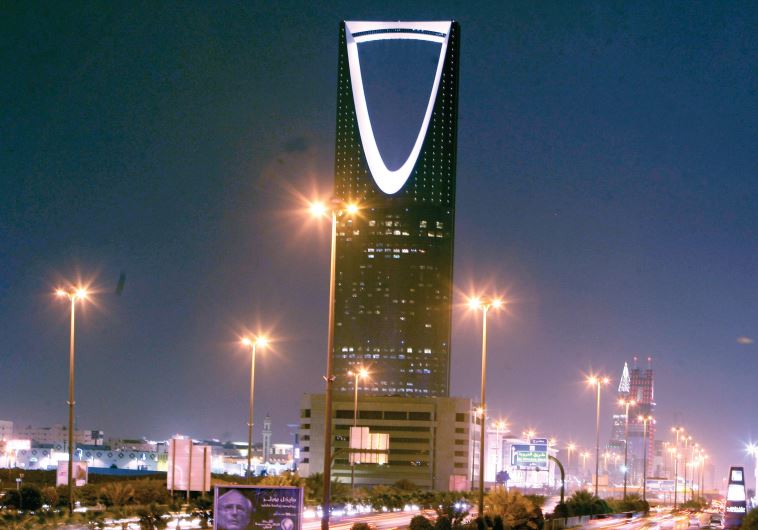 Experimental skyscrapers like this one are part of the Saudis’ efforts to portray a modern image. (photo credit: MAARIV HAMUSAF)
In an effort to ensure social calm, Salman has been distributing generous grants to civil servants, and he gave military officials an extra two months’ worth of salary. He offered students and pensioners incredible scholarships and grants.Western businessmen who live here tend to be forgiving when they talk about the rift among the Saudi elite.“This phenomenon repeats itself every time there is a change in leadership. The people who’ve been pushed out of powerful positions always complain. The kingdom is stable,” noted a member of the royal family.So what’s really going on with King Salman? Does he have advanced dementia like his opponents claim? “He is completely clearheaded,” a journalist who had visited with Salman a few times in recent months said hesitantly.“He just gets tired quickly, which is normal for his age.”
OFFICIALLY, JEWS are not allowed to set foot on the sacred soil of Saudi Arabia.“This is the first time I’m taking part in a Hebrew-language tour of Riyadh,” said my host in fluent Hebrew. Dr. Mohammed Alghbban is chairman of the Department of Modern Languages and Translation at King Saud University (KSU) in Riyadh, as well as professor of Hebrew. Amazingly, there is such a department at the huge university where students are actively learning Hebrew (“Although not many at the moment,” Alghbban admits) in the modern languages and translation department. Believe it or not, a student at KSU can get a bachelor’s degree in Hebrew.KSU is spread out over many miles.The women’s campus is completely separate from the men’s campus. And by the way, Hebrew language classes are not available for women. This is for practical reasons, Alghbban explains.“In any case, studying Hebrew does not lead to gainful employment, so they don’t want to invest in such a course for women,” he says.The women’s campus is absolutely magnificent.It was recently renovated and is located near the Old City of Diriyah, far from the men’s campus. There is absolutely no connection between the two campuses.Only women lecturers are allowed on campus; male lecturers must teach through video conferencing. The only joint studying is in the medical school, which is also mostly separate. The women here are not discriminated against – the buildings are elegant and modern and the classrooms and labs spacious.The lecturers enjoy comfortable living quarters on campus. Alghbban lives on campus and also has his own parking spot. This is a big deal since every morning the campus fills up with tens of thousands of cars belonging to students hungry for knowledge.University studies in Saudi Arabia are free, as long as students meet the criteria for excellence. 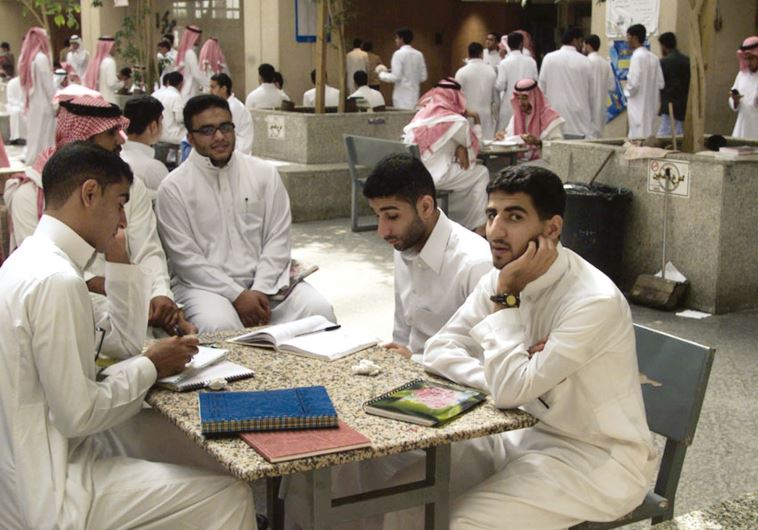 Students take break at the university in Riyadh. (photo credit: MAARIV HAMUSAF) I first met Alghbban at an academic conference in the US, where I was representing a French university. He was doing a doctorate at Indiana University.He’s never been in direct contact with Israeli researchers or professors, and of course he’s never visited Israel. He’s had to separate the Hebrew language from the Jewish state, but that hasn’t stopped him from being extremely well-versed in Hebrew literature.Alghbban grew up in the northern part of Saudi Arabia, not far from Eilat, and he used to spend hours listening to Israeli radio broadcasts. And when he went to live in the capital, his acquaintance with the Hebrew language from his childhood drove him to make the study of Hebrew possible at the university.Hebrew literature, such as short pieces by Yosef Haim Brenner, S.Y. Agnon and Etgar Keret are read at KSU only as part of translation studies.What can a Saudi student do with a degree in Hebrew? “Not much. They can continue on to a graduate degree in linguistics,” says Alghbban.“Some people are curious, but sometimes they only sign up for Hebrew because there was no more room in the English, German and Spanish classes, which you need a much higher score on the entrance exam to get into.”The Hebrew department has been in existence for 20 years. The first students were Egyptian and Jordanian lecturers who already spoke Hebrew, and later Saudi students joined, too.Most of the large projects Alghbban works on are in the field of translation: from Hebrew to Arabic and vice versa.He is currently translating the debate between Prophet Muhammad and the Jews, which has never before been translated into Hebrew. One of his previous projects was another first: the translation of a Hebrew novel into Arabic. He decided to be cautious, and so he chose an Arab-Israeli author, Ayman Siksik, who writes about identity and what it’s like to be an adolescent Arab in the mixed city of Jaffa.When I first called Alghbban after arriving in Saudi Arabia, I addressed him in English, just to be cautious, but he replied in fluent Hebrew. When I had met him at the conference in the US, he had been wearing a sports coat, as most western lecturers do. But in the hotel lobby here in Riyadh he was wearing a keffiyeh and a jalabiya, so I didn’t recognize him at first. “Sometimes I speak in Hebrew with colleagues regarding pedagogical issues,” Alghbban says, “but this is a very exciting opportunity for me to have a normal conversation with you in Hebrew.” 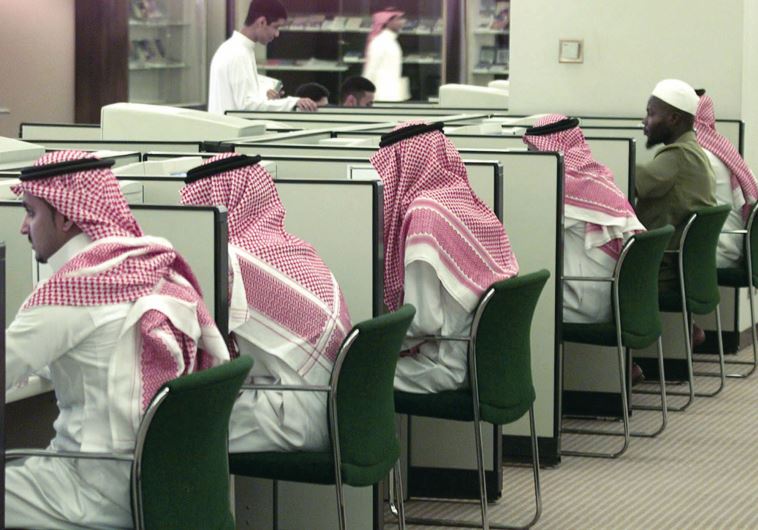 While moving into the future, Saudi Arabia remains far behind in equal rights for women and human rights. (photo credit: MAARIV HAMUSAF)
The two of us left the Al Ajami restaurant and walked together towards King Fahd Road, where tall buildings and shopping malls have become the city’s trademark in recent years in an effort to close the gap between Saudi Arabia and the United Arab Emirates.I HEARD a few Riyadh residents complain about how disruptive excavations and work on the Riyadh subway have been. The project, which was delayed again and again for years, is costing 60 percent more than the original estimate.All of this sounds very similar to what’s going on with the Tel Aviv light rail. Companies from the Czech Republic and Spain won the tender to build the subway in Riyadh. A French company is currently bidding for the metro that will be built in Mecca – yes, the city holy to Islam is planning to keep up with modern times.That night, I visited a Saudi mall, which looked just like any mall in the West, with all of the chain stores.However, here the women had to walk behind the men at a distance and to make sure they were completely covered by their headscarves. Men are allowed to shop in lingerie stores only if they’re accompanied by their wives.“Saudi women buy bras and panties to give their husbands pleasure, to prove that they are good women,” says Nadja (not her real name), a student who is fighting, without much hope, for equal rights for Saudi women. “I am so jealous of women who live in the West. This repressive regime makes me want to leave my country.”The feminist struggle for the right of women to drive has yet to succeed.Women are only allowed to be driven places and must always be seated in the back seat. Nadja shows me a huge lot at the outskirts of the city where young women sit in cars on one side and young men sit in cars in the other.The men and women are too far away to speak to each other, but if a man sees a girl he thinks looks nice, he can yell out his phone number to her. The next step is, of course, carried out in private.Some Saudi women have chosen to continue the feminist struggle. Dozens of businesswomen sat behind a screen at the Ritz Carlton Hotel in Riyadh.They are all members of the local chamber of commerce, which was allowed by King Abdullah. Two women, Lama al-Suliman and Nashwa Maher, were the first women to have managerial positions in the Jedda chamber of commerce branch, which has 300 women members. The two of them have university degrees, and are currently fighting to pass legislation that would allow women to run businesses from home.They’ve already managed to overcome the ruling according to which women must be “good housewives,” but they have much work ahead of them. They have high hopes that with the current openness and liberalism, they might one day receive the right to apply for a driver’s license.ON THE one hand, Saudi Arabia is moving towards the West. But on the other, it still carries out public executions according to Islamic law. It is making great efforts these days to draw people’s attention to the former. Translated by Hannah Hochner.This article originally appeared in The Jerusalem Post Magazine