Is Israel on the right path when it comes to battling racism?

Two years ago, protests by Israelis of Ethiopian descent swept the country. The government’s response has been robust, but has anything really changed? 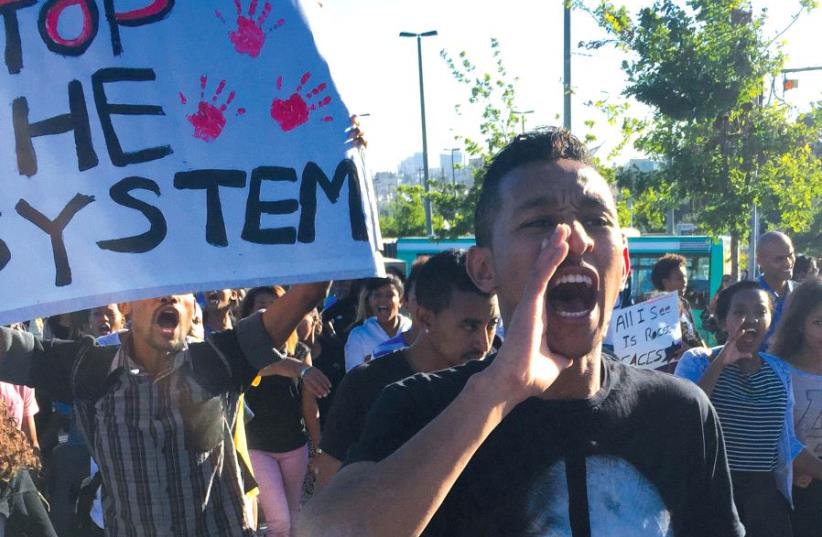 Jerusalem protest against discriminatory policies and racism, in April last year
(photo credit: SETH J. FRANTZMAN)
Advertisement
The Israel Police recently presented a new video about their work in the community. It shows police officers aiding a family suffering domestic abuse, dealing with drunk drivers, defending against terrorism and more. “Protecting lives of all of us” and making the public feel secure, the narrator says. One of the officers on the video is shown breaking a car window to rescue a baby. The officer is of Ethiopian descent, a quiet message of diversity in a video meant to help the image of the police.The 2017 video is a far cry from images in late April 2015 when a video emerged of two policeman assaulting an IDF soldier in Holon. Damas Pakedeh, the soldier, was initially detained, but the police were quick to condemn the behavior of the officers as “not consistent with the values of the Israel Police.” On April 30, hundreds of protesters marched in Jerusalem, decrying police brutality and racism. They closed Route 1 next to the national police headquarters. One woman held a sign saying police were killing “black Jews” just like Jews had been killed in Europe, while another man held one saying “the police beat me because I am black.”