Out of step: How people with disabilities cope in Israel

Hundreds of thousands of disabled people struggle to cope and make ends meet. What does life look like for those who have no choice but to rely on state aid? 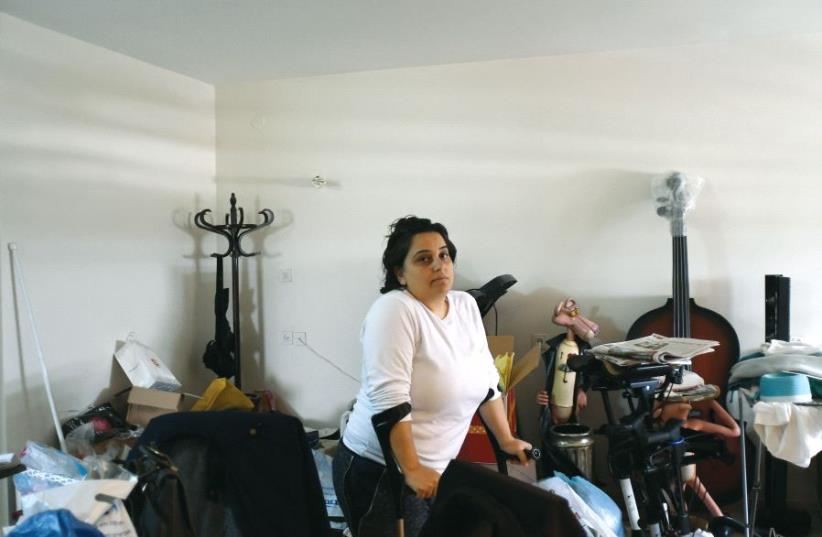 Avital Cohen
(photo credit: URIEL MESSA)
Advertisement
Disability came to Avital Cohen, once a successful singer, by surprise and all at once.“When something like this happens, you’re supposed to get some sort of preparation, or suffer for a few years beforehand. It makes no sense to be on stage, singing and dancing, and then two days later your spine is a complete mess.”Yet that’s precisely what happened to Cohen, when in 2002 she was diagnosed with cauda equina syndrome, a rare neurological condition causing severe damage to a group of nerve roots located at the lower end of the spinal cord, resulting in back pain, loss of sensation in legs, bladder and bowel dysfunctions and more.

“I was with the band in Eilat and already there I felt like something wasn’t quite right. I told my friends that I would have to take a flight home rather than return with them in the car.”The first doctor she saw told her she needed urgent surgery and suspected she had the syndrome. She didn’t believe him.“I didn’t want to acknowledge it… I don’t think anyone can accept such a diagnosis so easily.”Cohen spent the next three or so years in rehabilitation, learning once more how to stand up, move, walk. Today she is able to walk slowly using various mobility devices, although her nervous system will never be the same.“The hands don’t quite function; things fall. I need help cleaning myself. The body itself changes.” 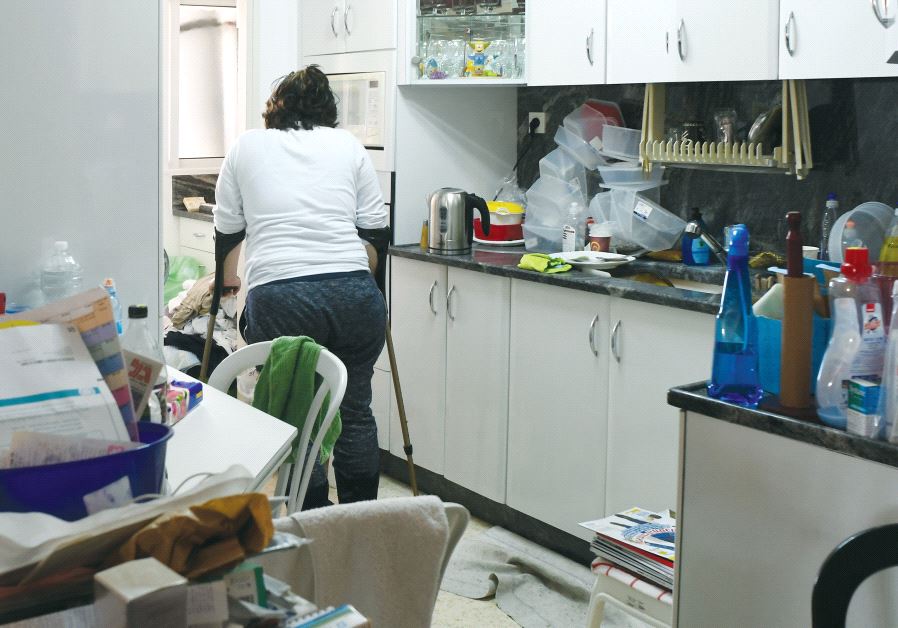 Cohen’s physical disability is limiting, but her financial situation as a disabled person is also a critical problem. Unable to work, she must rely on a disability allowance – currently NIS 2,342 a month, just under half the minimum wage in Israel. To that is added a nursing allowance, which still amounts to less than what it actually costs to keep an in-house caregiver.Recently the Finance Ministry announced that the state will lead a gradual rise of the disability allowance in Israel to NIS 4,000 in three years, although this process is set to begin only in January next year and hasn’t been authorized yet. Meanwhile, hundreds of thousands of people in Israel struggle daily with the current rates.Expenses are very high, Cohen explains.“A person with a complex disability like myself needs about seven or eight different mobility devices. My insurance offers the most basic ones, worth a couple hundred shekels, which are not good enough. The ones I use cost thousands of shekels each, and I don’t even get them VAT-free!” Then there are expensive medications, which she says cost her about NIS 1,600 a month, and other treatments like medical massages, needed to relieve the pain and costing an additional few hundred shekels. All this is before bills, food and clothes.Cohen is living with ongoing loans to pay for electricity and water, she says, and eats what she calls “battle rations” and dishes from her neighbors who cook for her, as she is physically unable to do so herself.“The government simply cut us off,” says Cohen. “The country has all these memorial days; and I think there should be a memorial day for disabled people. That is how extreme things have become.”Means, not an end “Poverty is the result of an incorrect distribution of wealth,” explains Ilan Gilon, MK for Meretz and one of the leaders of the call to match the country’s disability allowance with its minimum wage.“My goal in this struggle is to raise the poverty line. Today it stands at NIS 3,130; I want it to be in the area of NIS 5,000 to 6,000.”His path toward the goal is the disability allowance, which he considers a safety net for all. Disability is not some kind of unique status reserved for some, he says, but something that can happen at any time to anyone. And once it does, life changes drastically enough even before worrying about finances.The main argument against a rise in the allowance, as can be expected, is that there isn’t enough budget to support it. Gilon disagrees.“Of course we have enough money. We have reserves from last year’s surplus… We’re talking about NIS 20 billion. That’s enough to cover the higher allowance, to give to the elderly – and if we really must, it’s even enough for another 12 to 14 submarines.”This particular struggle is “the most moral one taking place in Israel these days,” comments Karin Elharar, MK for Yesh Atid, who also takes an active part in this struggle. The question of money is only one of the difficulties standing in the way of a normal life for those with disabilities, though.Accessibility is a constant concern.For Gilon, accessibility means not only installing wheelchair ramps but a critical change in state of mind.“We need a totally different outlook on the individual and on society’s role in making [life] accessible. We can legislate endlessly, but what we really need is for people to be good humans.It’s about respect, education, being there for one another.”“Accessibility means enabling people to live a normal life, regardless of disability,” explains Yuval Wagner, founder and president of Access Israel.“Accessibility is means, not an end,” he continues. “The ultimate goal is to allow people who have become disabled to continue living, working, studying and even have leisure activities just like anyone else.”Wagner’s organization works to raise awareness and help in implementation of the law. Israeli law mandates equal rights for people with disabilities, going as far as detailing specifications for accessibility in parking, building, etc., he explains, but implementation is another story. 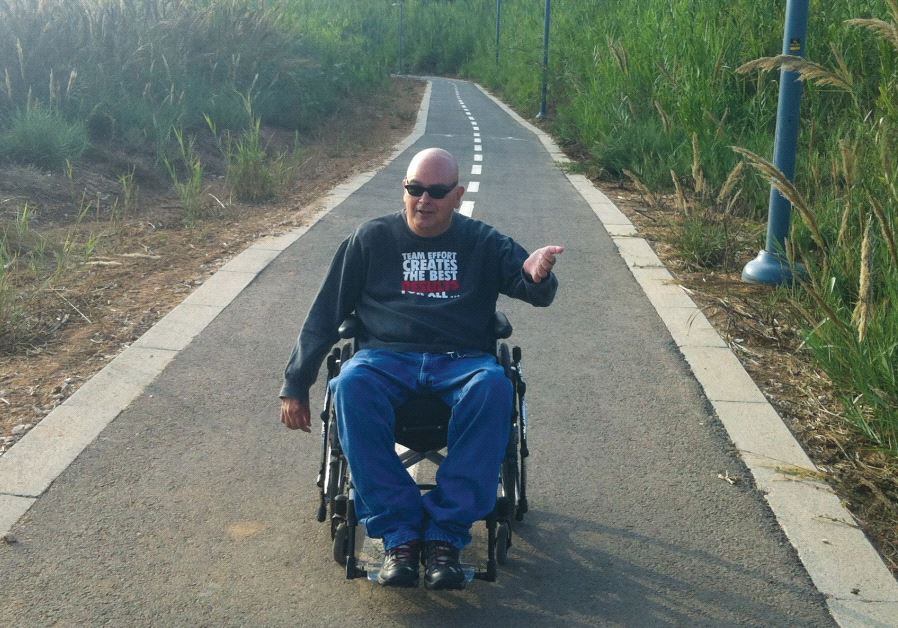 A legislation passed in 2005 requires all private entities to be accessible by the end of 2017, but it gave public entities an extra year, and local government got a 2021 deadline.“Looking at the glass half full, we do see a whole lot of work already being done, but there’s a lot more that needs to happen,” Wagner says.“It’s a little like what happens in healthcare. People used to die from heart attacks often. Now we know how to save them, but we find a host of other problems we didn’t even imagine. The same goes here: it used to be the case that a person in a wheelchair couldn’t enter many buildings. Now they can and we see new, smaller problems we didn’t expect.”He gives as example the act of standing in line.“We solved this by deciding that people with disabilities are exempt from waiting in line. They can go right ahead. But they all do, and now [in some places] there’s a new line just for disabled people, so which one gets to go first and which have to wait?” Wagner further points out the social problem around disabilities, and the different treatment society gives people with disabilities. He was injured during his service in the air force, an injury that left him paralyzed from the neck down. “I used to show up in meetings on my wheelchair and wearing my uniform, but now that I’ve retired I see a completely different attitude.”He learned that the uniform somehow “compensated” in terms of how people treat him.“Obviously once conversation gets going people don’t even notice the wheelchair anymore, but you do still see that initial reaction. Social awareness is far from complete.”Opening the door This is equally true when discussing other disabilities, including deafness, blindness and various mental conditions.“What we should all do is try and get over our fear,” says Elharar. “Everyone is afraid of what we don’t know, of what’s different from us.”Sometimes the trouble is in misunderstanding the severity, says Cohen. Even within the category of physical disability, not all problems are easily visible.“You might see someone, his hands are intact, his legs looks OK, he’s whole – but you don’t know what’s inside.”For instance, you can’t tell by looking how much physical pain a person is in.“So you might see this person and say, so what’s the problem? You can’t just live normally? Cook a meal, wash the floor? Sometimes you might see someone stepping out of their car, and say, they’re walking – why do they need disabled parking?” It’s more complicated than that, she explains, and just because we can’t necessarily see their pain doesn’t mean it’s not there and doesn’t need special accommodation.To accommodate disabled workers, employers need to make adjustments for employees with disabilities – but they have to hire them first. Elharar encourages employers to put aside their fears and give people with disabilities a chance.“In fact, employers can receive government assistance for accessibility,” she explains. “We have money set aside for that. But no one’s asking for it.Maybe they’re unaware; but maybe they just don’t want it. They prefer taking the easier way, but that’s a shame, because it would be a real win-win.”Fortunately, there are employers who do show interest in hiring and accommodating people with disabilities, finds Itzik Ben David, who recently began a new role as the person in charge of disabled employee placement in a large public company, and previously worked for three years in the Center for the Blind in Israel, accompanying and assisting blind men and women around the country.“The company that I’ve recently begun working in is undergoing a major change. It’s about to open all roles for everyone – including the disabled – of course, giving equal pay to everyone.”According to Ben David, hiring is only the first step. He uses his own experience to assist new employees in the system with whatever accessibility needs they might have, as well as emotional and physical needs that come up.“The first days in any new job are frantic. You’re constantly wondering how the other side sees you, what they think, walking on eggshells in trying to make the right impression. All the more so for people with disabilities: every wrong move at this early stage is not a blow to the wing, but to the engine.”“There are too many things the country refuses to take care of and some of them end up being handled by non-profit organizations,” Wagner emphasizes.“People with disabilities don’t get the most basic, necessary allowance. It’s unthinkable, no matter what excuses or stories come up. Whatever surplus we have we should give it first to those in need… It’s not even about equality, it’s about giving people the chance to live a normal life.”