The entire ensemble has been in the midst of rehearsals for the past year in Tel Aviv. 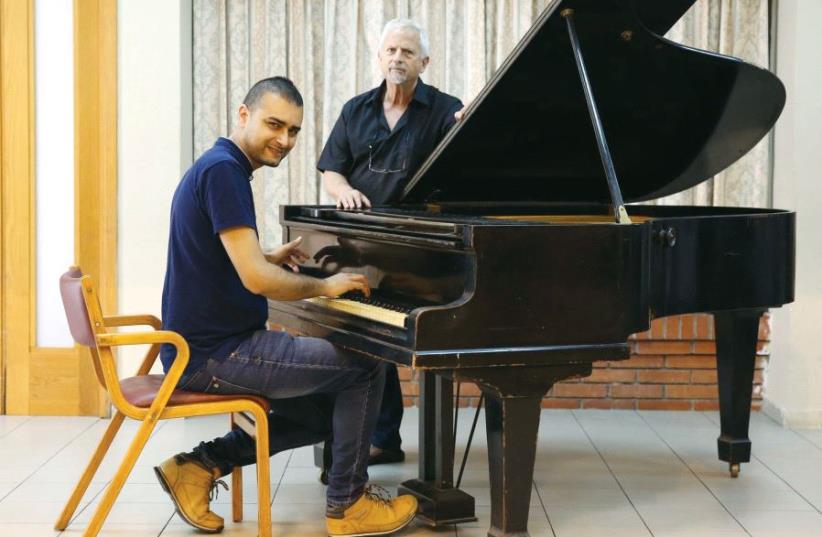 Musicians Haggi Goren and Nizar El-Khater (at the piano) – Bringing Fairuz to the Israeli audience
(photo credit: Courtesy)
Advertisement
In the spirit of seeking coexistence and mutual understanding through creative endeavors, the Near Eastern Voices Project uses local voices from the Gary Bertini Israel Choir chamber singers to create a unique aural experience for a global audience. By fusing sounds and musical styles from Lebanon, Syria, Egypt and Yemen with traditional Western musical compositions and instruments, the project hopes to break down barriers and give audiences something they have never heard before.The project is headed by musical director Haggi Goren. The idea first came to him in 2014, following Operation Protective Edge, when the atmosphere in Israel was “full of hatred and polarity.” Compelled to fix the situation the only way he knew how, he began searching for a way not only to share Arabic and Oriental songs with Israelis, but also to fuse them with Western musical influences and styles to create a new musical experience, hopefully to bring Israelis and Arabs together through mutual appreciation of music.Like most efforts for coexistence, the Near Eastern Voices Project encounters its share of stumbling blocks. One presents itself in the form of training mostly Western singers to sing in an Eastern and Oriental style and pronunciation.
Read More...
As Goren explains, “In the West, musical compositions are based on harmony, whereas in the East the focus is on melody.” One could see this as a metaphor for the ongoing conflict. Head conductor Ronen Boroshevski agrees, but insists that they “are not talking politics, because politics failed. If the people live in harmony together, the politicians will have to do something about it. If we are all living in peace on the people level, then it just has to work ‘upstairs.’” He notes that Lebanese singer Fairuz is “one of the greatest Arabic singers in known history. I don’t think there’s a single Arab person who doesn’t know her songs, yet we Israelis – especially Jews of Eastern European descent – are not at all familiar with them. This is a nice way to connect us to their traditions and to do it together, to sing in a traditional Arabic style.”Although the choir is largely comprised of Israeli Jewish singers, the project recruited several Arab instrumentalists, including an oud player and percussionists, soloist Maria Jobrani, and Nizar El-Khater as the composer and pianist.El-Khater, the 32-year-old pianist and composer, hails from Lod and has been accompanying orchestras and composing arrangements for more than a decade both here and abroad.More recently, he has been studying and composing more music with Arabic roots, which, according to Goren “is why we chose him; he’s really the perfect person to do this project.”The entire ensemble has been in the midst of rehearsals for the past year in Tel Aviv in order to record a 12-track album in France in August, where they will also perform a selection of songs at various venues throughout the country.The album will feature Israeli folk songs, traditional Beduin and Yemenite songs, plus songs sung in other Eastern dialects from Syria and Egypt.To get this project off the ground successfully, like many creative endeavors these days, the project is in the midst of crowdfunding. Although there are no recorded samples to hear at this time, the group will be making its performance debut in Israel at the annual oud festival in Jerusalem in November, followed by a number of other performances throughout the country.