German tourism to Israel on the rise as terrorism goes global

Security concerns are apparently diminishing among German tourists, as terrorism extends its tentacles to Europe. 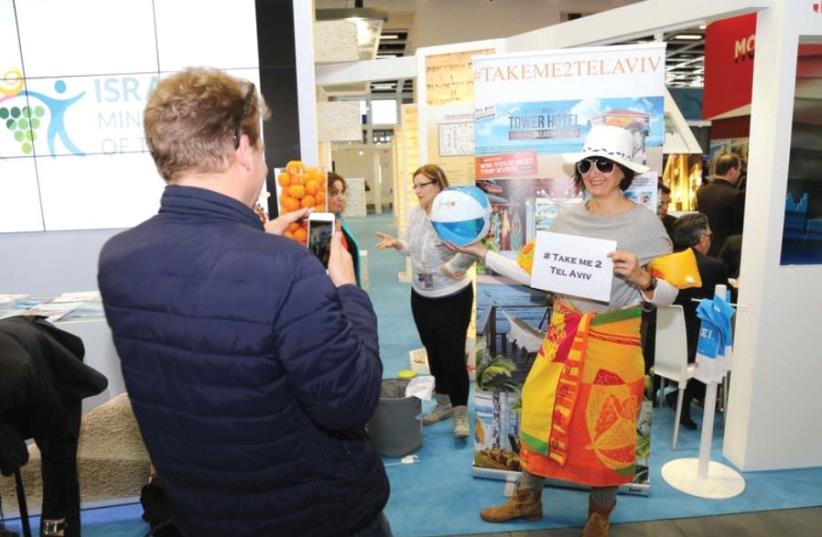 ‘Land of Creation’: At the world’s largest trade show, in the Berlin Convention Center
(photo credit: BURGHARD MANNHOEFER / ISRAELI GOVERNMENT / TOURIST OFFICE)
Advertisement
In the same week in which an ax-wielding terrorist wounded five at the Düsseldorf railway station in Germany, Israel established itself with a sign in rainbow colors advertising the “Land of Creation” at the world’s largest tourism trade show, held at the Berlin Convention Center from March 7 to 12.Over a year ago, the wave of terrorist attacks hitting Israel and particularly Jerusalem might have deterred German tourists from visiting the Jewish state, but according to Israeli representatives and tour operators networking at this tourism extravaganza, security concerns are diminishing among German tourists, as terrorism extends its tentacles to Europe.

According to the Israel Government Tourist Office in Berlin, the fall of 2016 saw a 13% rise in tourism from German-speaking countries, compared to 2015, and a marked increase from previous years. The start of 2017 has also shown a marked rise, with repeat visitors counting for about 40% of German tourism.At the event, Gerd Müller, the general manager of Frankfurt-based Diesenhaus Ram, a travel agency specializing in Israel, declined to offer exact numbers but said his company has been pleased with bookings in 2016 compared to previous years.“There’s an increase of interest among the public, and I see there’s also a different attitude toward feelings toward Israel,” Müller said. “There is a very positive attitude. Before, we talked to people a lot about the security situation, and now, when I was visiting and attending travel fairs, we didn’t have to talk about it.People said: ‘I want to go to Israel. Please help me.’” The Israel exhibition covered 670 square meters of one of the 26 fully decked, colorful halls, situated peacefully near the exhibitions of Egypt, Lebanon and Jordan. (The “State of Palestine” had its own exhibition in another hall, near Tunisia and Algeria.) Responding to increased demand, new Israel-Germany routes will be added this year. From winter 2017, the popular discount airline Ryanair will begin to operate flights from Baden-Baden, Frankfurt and Berlin to Eilat, and from Baden-Baden to Tel Aviv. It is hoped that by this time, the new Ramon International Airport in Eilat will be in operation, transforming southern Israel into its own destination.Eli Nahmias, director of incoming tourism at the Jerusalem Development Authority, said that 90% of German visitors to Israel make it to Jerusalem. The city of Jerusalem has invested in European tourism, with five tourism offices on the continent and intense marketing activity showcasing the cultural diversity, festivals and events in the capital.“German tourists are coming more for cultural tourism,” Nahmias said, over Arabic music coming from the Jordanian exhibition, music which just moments before had competed with Mizrahi music coming from the Israeli exhibition. “It’s tourism that seeks to visit new destinations and historical destinations, like Jerusalem, which has a lot of diversity.”Nahmias added that the average tourist increasingly perceives Israel as safe and professional when it comes to security, particularly in an increasingly terrorism-ridden Europe.“It could happen anywhere in the world,” he said.“And they see that in Jerusalem and in the State of Israel we learned to cope with the security situation, so after a security incident we go back to routine, and the tourists could continue their visit without any interruption.”Judging from the investment in the Israel exhibition – which featured a handsome booth for every major city and region; 3D “goggles” of Israeli attractions; the Berlin-based Israeli restaurant Yafo handing out Israeli-theme appetizers; and a caricaturist – it seems that Israeli tourism professionals understand that sales and marketing are key. Tel Aviv’s new gimmick – the pop-up luxury hotel “Lifeguard Tower” at Frishman Beach – received its own booth.While for Berliners Tel Aviv is often perceived as Berlin’s hip sister-city, justifying a weekend stay, the Tourism Ministry has launched an international campaign, “Two Cities; One Break,” to ensure that Israel’s spiritual side is equally traveled. The German website for the campaign offers four-night packages to Jerusalem and Tel Aviv starting at €199 per person.According to Daniela Epstein, director of the German- speaking department at Israeli exhibitor Sar-El Tours, it may be tempting to attribute the rise in incoming tourism to relaxed security concerns or increasing solidarity with Israel, but then she pulled out a German brochure to demonstrate another crucial factor. This one offered five nights in Israel starting at only €599 per person, including flights, with extra costs for add-ons.“In general, you hear less about [problems in] Israel,” she said. “You hear about problems in Brussels, Paris, America and other places. But if you also find a good deal, German tourists will buy it.”