Tel Aviv Pride: A rainbow of fun under the sun

A roundup of Tel Aviv Pride events, kicking off with Friday’s Pride Parade 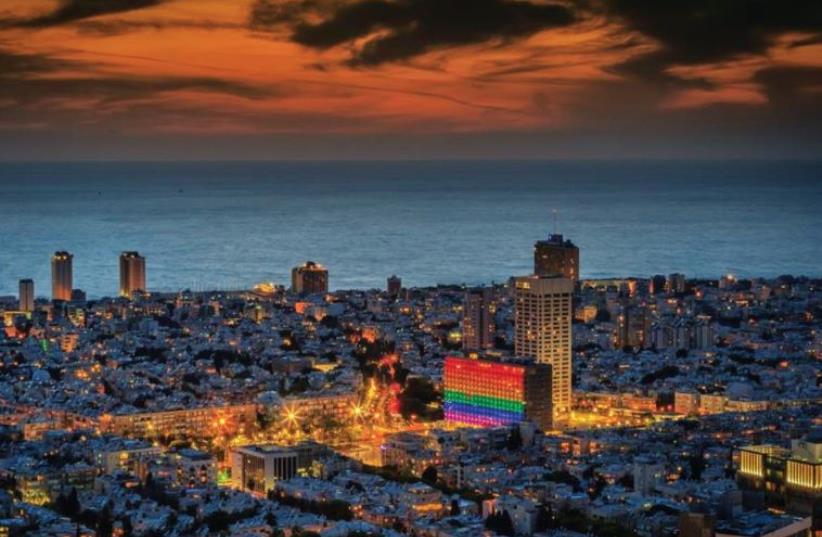 In 2015, the White City was lit up in the colors of the rainbow flag in honor of pride.
(photo credit: TEL AVIV-JAFFA MUNICIPALITY)
Advertisement
Rainbow flags line the main boulevards of Tel Aviv and an exuberant energy surges through the air as revelers gear up for the grand finale weekend of the city’s renowned Pride Week.The festive week launched on May 29 under the motif of “Women for a change,” marking the opening of Lesbian, Gay, Bixsexual and Transgender Pride Month.Tens of thousands of people flocked to the Middle East’s LGBT capital for the week-long festival. A multitude of events leading up to the pinnacle of Pride Week – the 18th annual Pride Parade taking place Friday – ranged from youth-led workshops on the issue of discrimination against the LGBT community to a technology summit organized by the Lesbians Who Tech community at the city’s Google Campus.Other highlights of this year’s Tel Aviv Pride festival ahead of the parade included Israel’s first beauty pageant for transgender women. Spotlighting this year’s theme of women in the LGBT community, 12 contenders competed in Thursday’s Miss Trans Israel Pageant at the Habima Theater. The contestants represented the rich cultural mosaic of Israel’s population with the participation of Israeli Arabs, former ultra-Orthodox Jews and Christian Arabs. The contest made waves globally as 21-year-old Ta’alin Abu Hanna, a Christian-Arab ballet dancer, was crowned queen and will represent Israel at the Miss Trans Star International Pageant in Barcelona in September.Touching on a musical note was the free concert and “Wigstock” event at Gan Meir on Wednesday (June 2) inspired by Eurovision, featuring former winners of the continental singing contest such as French singer Anne Marie David, Greek-Swedish vocalist Elena Paparizou, along with Israel’s own Dana International and this year’s national representative, Hovi Star.Taking advantage of Tel Aviv’s warm Mediterranean climate, other activities included tours of local spots known to be popular with the LGBT community, a “sexiest man” pageant at Tel Aviv’s water park and sundry beach gatherings and parties at Hilton Beach.The week will come to its peak on Friday with an estimated 200,000 people taking part in the largest pride parade in the Middle East.“The Pride Parade has turned into one of the symbols of the City of Tel Aviv with hundreds of thousands of participants and tourists from all over the country and the world,” said Tel Aviv Mayor Ron Huldai. “I believe that Tel Aviv-Jaffa, a city of tolerance, is a beacon to other cities in this issue.”Plans for this year’s parade faced calls for cancellation in April by some LGBT activists who argued that a NIS 11 million government-funded campaign aiming to attract tourists to the event overshadowed the pressing issue of comprehensive, state-recognized rights for members of the community.In the face of the cancellation calls, Finance Minister Moshe Kahlon announced a multiyear government plan that is set to allocate funds in the state budget for the needs of the LGBT community.However, the municipality did not budge and kept the parade schedule intact. The Tel Aviv-Jaffa Municipality, which fully sponsors the parade, has said that it invests about $1m. toward support and promotion of the LGBT community and expects about 35,000 tourist to visit the city for this year’s pride events.In addition to the parade, various parties, tours and cultural events have been scheduled during all of Pride Week, with a flurry of massive closing activities – and Metro has compiled a list of top suggested events taking place during the weekend apex of Pride Week.Ongoing Events TLVFest – International LBGT Film Festival Tel Aviv Cinematheque – Runs until 10:30 p.m. on June 7.The 11th-annual film festival offers dozens of public screenings of LGBT cinematic art. The festival’s program includes thematic competitions, meetings with local and international filmmakers, panel discussions and scriptwriting workshops. The film festival is a main fixture in Tel Aviv’s pride celebrations, and was tapped by Indiewire in 2014 and 2015 as one of the top 10 LGBT film festivals.Tickets are available at the box office and online: tlvfest.com/tlv/he/en/2016/04/24/tickets/ LBGT Culture Festival Habima Theater/LGBT Center The Habima Theater and the municipal LGBT Center’s Cube Theater have teamed up to present a variety of shows together. The collaboration, which highlights the role of women in the LGBT community, features theater, cabaret, musical performances and more.Order tickets by phone: (03) 629-555, with discount code 9063 ‘Hair,’ the musical Cameri Theater – Runs until June 4 The famed love-rock musical that took Broadway by storm hits the stage of one of Tel Aviv’s leading performing arts centers. Show times Friday and Saturday are at 9 p.m. The performance is in Hebrew with English subtitles.

A jamboree filled with concerts, speeches and shows will kick off festivities in Gan Meir, before the parade sets out at 12 p.m. A group of bike-riding women known as Dykes on Bikes is set to lead the march in honor of this year’s theme centering on LGBT women. Some 180,000 people are expected to march alongside floats with music and dancers on the route that ends at the seaside Charles Clore Park, where a massive beach party will be held until sunset. Entrance is free.Experiential and Musical Kabbalat Shabbat Kehilat Halev – 6 p.m.Children, families and adults of all ages are welcome to attend services at the spiritual center located at 48 Rashi Street. The egalitarian services offer free admission.

Mediterranean Food Parade Old Jaffa – 8 p.m.In honor of pride festivities, a couple of chefs will prepare a gourmet Mediterranean meal for diners at this communal table in the scenic port city of Jaffa. Booking can be make at eatwith.com NIS 249 per person Events on Saturday, June 4 Women’s Art Fair Sarona – 10 a.m. to 4 p.m.Artists from the LGBT community will showcase their wares at the upscale complex that was once a German Templer colony. Entrance is free.

Tel Aviv Gay Pride After-Party Bloomfield Stadium – 2 p.m.Israeli producer and DJ Offer Nissim will host the mega party featuring surprise musical artists and performers from Israel and abroad.Tickets are available for NIS 260 at the door at the stadium’s Gate 9 Events on Sunday, June 5 Forever Tel Aviv: Big Closing Clara Club – 4 p.m.Tel Aviv Pride goes out with a bang at the popular, open-air nightclub overlooking the sea. Tickets are required.A Tel Aviv Pride Pass offering open access to a variety of select parties throughout the week is available for NIS 700.
Advertisement
Subscribe for our daily newsletter