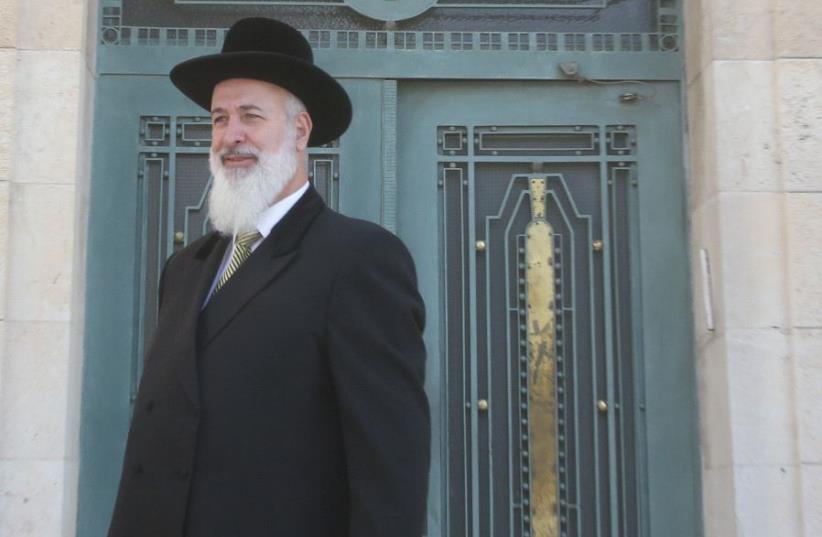 Former chief rabbi Yona Metzger leaves a Jerusalem court last March
(photo credit: MARC ISRAEL SELLEM)
Advertisement
So now Israel’s chief rabbi is joining an ex-president and an ex-prime minister and some assorted members of Knesset on the list of jailbirds with a history. But somehow a rabbi of distinction is even harder to stomach. I read your column with great interest and I was wondering whether this shakes your faith? Shaken to the core Ashkelon Pam Peled: This is a no-brainer. We know that power corrupts and absolute power corrupts absolutely. Of course some prime ministers and rabbis will walk the primrose way to trouble. They shouldn’t; we’d like our moral guardians to be upright and good. But give a guy authority to say who is a Jew, and what restaurant is kosher; that’s heady power, involving lots of cash. Stories of kashrut police pocketing bribes are rampant; it’s naïve to believe the rot wouldn’t rise to the top.None of this is new. Didn’t Nadab and Abihu, at Judaism’s dawn, bring “strange fire” to the Temple and get consumed by God? Rashi proposes that the boys were drunk; why were the high priest’s sons inebriated so soon after walking in the sacred space of Mount Sinai? Were they high on power, perhaps? This phenomenon is by no means unique to the Jews. Chaucer’s Canterbury Tales is peopled with 14th-century summoners and pardoners who are lecherous, money- loving and lewd. They prey on widows and orphans and the weak; the Church fuels their corruption. Ron Hubbard (founder of the Church of Scientology) died very rich; Pope Clement VII’s reasons for kicking Henry VIII out of his church are cloudy.Religion does great good: it provides community, rhythm and lasagnas that plop on doorsteps in troubled times. Shabbat is never lonely with community kiddushim; life-events are mapped out and embracing. But at the risk of becoming a cliché myself, I say again: Religion does not make for better people. It only makes you wait longer between meat and milk.Tzippi Sha-ked:I expected Pam to say: “People are people. The only difference between religious and secular Jews is that the former wait longer between meat and milk.”Yes, people are people indeed, and – no surprise – religious figures are also affected by the culture in which they live. Torah is an antidote to disturbing societal norms; it should inspire good behavior, or at least mitigate bad. (Maybe this rabbi would have transgressed more without Torah?) Life is a daily temptress pinching our free will, challenging our choices, and forcing us to write our own moral scripts. That some key players in the frum world succumb to all manner of temptation casts an ugly shadow on our community. Corruption must be weeded out – without exception. As embarrassing as it is for our nation when some of Israel’s political elite spend time in jail, it’s also an overt message for us, and the rest of the world: we have no favorites when it comes to transgressions; we show our greatest to their individual cells.We can be no less vigilant in the religious world, painful as it may be. And it certainly is painful.But it has no connection with my faith in God.Danit Shemesh: There’s an old parable. The “wise men” of Chelm decided that they had enough of worrying. So they appointed Shlomke to be the professional worrier; he was good at that. When they tried to sleep that night, they found that they were still worried. They came knocking on Shlomke’s door accusing him of neglecting his job. To this he responded, ‘Well? You set me up with money, housing, schooling – how can I worry?’ In the face of ongoing deep disappointment, the fact that we still appoint leaders is testament to our reliance on societal order and appropriate behavior. We lean into hierarchy by trusting our leaders to be worthy of the trust we place in them. But leaders can’t live our lives for us or be good for us. We can’t wait on the sidelines to see that a political rav is perfect before we activate our faith. In this era of darkness, each of us must work hard to discern between right and wrong. We’re all responsible for our own personhood. Faith is a major component of being righteous; it’s the supreme “checks and balances” against which we must measure ourselves.Our faith is not fickle; it does not waver in the face of human frailty. We believe in Torah as the divine connecting agent to Hashem [God] – the ultimate, right way to live. That does not sway with sociopolitical winds or the aberration of others.However, hillul hashem [desecration of God’s name] is the most serious of sins. It is the wayward leader’s problem, not ours.Fire Shlomke.Comments and questions: [email protected] www.facebook.com/3ladies3lattes/Three Ladies, Three Lattes looks at percolating issues in Israel’s complicated social and religious fabric.Secular Pam, modern Orthodox Tzippi and haredi Danit answer your questions.