Three Ladies, Three Lattes: We’re (not) all going on a summer holiday 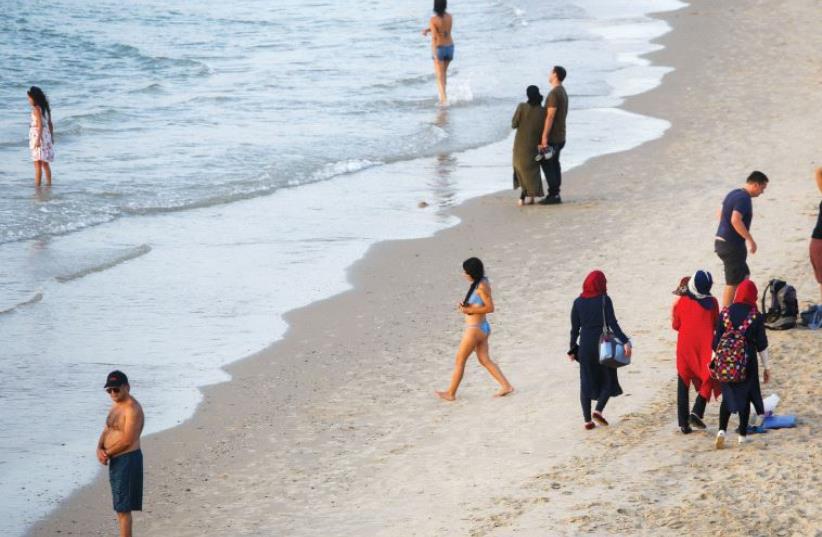 Beachgoers in Tel Aviv
(photo credit: MARC ISRAEL SELLEM)
Advertisement
I’m a traditional woman from England with three kids – one religious with six children, one traditional, one very anti- religious.All I want is to celebrate my upcoming 60th birthday with my family. My religious son will not do a beach holiday, as he doesn’t want his 10-year-old to see women in bikinis. My daughter who lives in Sweden only wants the sun and the beach. My secular son is just getting irritated with it all. What to do?– Going Mad in Manchester
Pam Peled: Oy, I just don’t have patience for this anymore.Tell your son to read Ayaan Hirsi Ali’s book Infidel. The Somali-born Dutch-American activist describes her first time at a swimming pool where women wore bikinis at a refugee center in Holland. Horrified, Ali – who’d been educated to believe an angel on women’s shoulders watches what they wear, and that immodest clothing would surely result in rape – stared in amazement as men in shorts spoke politely to girls baring skin. It was a pivotal moment for her. Ali realized that Muslim men in the main treated their covered-up women with much less respect – much, much less respect – than these half-naked sun worshipers were experiencing.The way we dress has nothing – nothing! – to do with the respect we are accorded.Covering up is the equivalent of binding Chinese women’s feet, and the burka and the veil are ploys to keep women subservient. It is in no way connected to godliness and piety and being better human beings.Good luck with telling your son this, and your daughter-in-law; why women buy into this stuff is one of the mysteries of life.What to do? Jeez, I wish I knew.Rent a house with a pool by the beach – those who dare brave shameless hussies in skimpy swimsuits can swing down to the sand; the others can stay in the safe confines of the garden with separate swimming hours for the girl grandchildren and the boys. Are siblings allowed to splash together? It gives me a headache to think about it.
Danit Shemesh: Pirkei Avot traces out the continuum of life by decades, and teaches us that the 60th year is one of acquiring resolve and decision; it’s the year of owning one’s life choices, including to “choose life.” It takes 60 years for one to be a zaken, meaning zeh kana, “this he has attained.” It’s a big year, an important milestone, one that proclaims “This is my life, my birthday, my home!” Navigating different sensitivities and perspectives can be treacherous to this milestone. You may miss the point entirely. We know you cannot please all of the people all of the time.Perhaps it is time to stop pleasing. Begin to be the real you: If, as you say, you’re traditional, you will embrace modesty and no mixed swimming.Round my Shabbat table sit as many opinions as do people, sometimes more opinions than people. You can imagine that though the atmosphere is spirited, the peaceful, easy feeling can be precarious.Pam once said to me that she could just as easily be offended by my long sleeves as I am by her short ones.While I see her equal-opportunity logic, I beg to differ. My long sleeves may be offensive on the conceptual level, but her short sleeves are offensive on the experiential level.Lead your ship to the shores of commonality and respect; to ahva, brotherhood.Sing out to your family that they can (and must) accept one another and stop antagonizing on a conceptual level. Smile and embrace even when you disagree.
Tzippi Sha-ked: Happy 60th! I suggest you give yourself a present: a headache-free birthday.To quote my late father’s mantra: “As long as they are hurting only themselves, everyone’s maladjustment is their own prerogative.” This is other people’s maladjustment, not yours. We’re blessed with kilometers of coastline, some of it sans people.Pick a spot – some of your lovely kids can swim, turn a blind eye, wear a burkini or “take a hike.” Have plenty of party favorites: sunscreen, blindfolds, martinis, lithium...Here’s the crazy thing: Recently Arabs and Jews held a burkini love-fest in Jaffa where left-wing Jews protested for the right of Muslims to wear religious attire to the beach, echoing the sentiments of left-wingers in France. I have to ask: Why do left-wingers protect Muslim-dress sensitivity but never those of haredi Jews? This summer I was in Amish territory in Pennsylvania. Amazingly, locals spoke of Amish neighbors with amusement, not animosity; with tolerance and no tirade; with perplexity, yes, but never persecution. These amateur sociologists embodied the creed of not impinging on the rights of others; it was so refreshing.As a religious Jew, it saddens me that modesty and the right to live it are viewed by some as archaic and distasteful. When current fashion is considered “enlightened,” Torah sensitivities take a back seat. Still, no one stream can dictate to another how and where to parade swimwear; that is unacceptable.Honey, this is your birthday. Celebrate it, with or without your kids, however you like: in a bikini or wrapped in a towel.
Comments and questions: 3ladies3lattes@ gmail.com
Advertisement
Subscribe for our daily newsletter