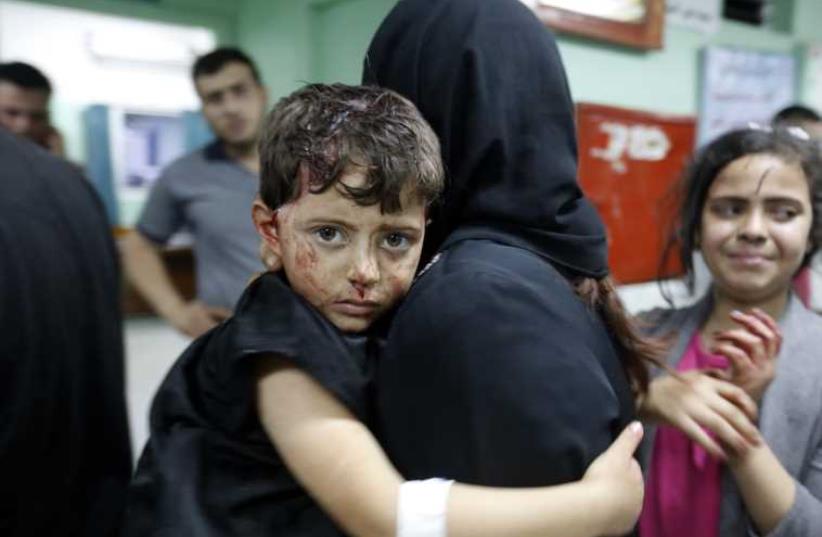 A boy who was injured by an explosion at a Hamas training camp at a hospital in Beit Lahiya, Gaza
(photo credit: AFP PHOTO)
Advertisement
Around 50 people, including children, were wounded after an explosive detonated inside a Hamas training camp in the Gaza Strip, AFP reported Friday. Witnesses at the scene said that the blast took place at a training camp of Izzadin Kassam, Hamas's military wing, in the northern Gaza city of Beit Lahiya.A doctor at Al-Awda Hospital, Baker Abu Safia, said that most of the 30 people who were brought to his hospital were women and children. He added that the hospital was in a "state of emergency" following the incident.Hamas health ministry spokesman, Ashra al-Qudra, said that among the 50 people hurt, five were were in serious condition.The reason for the blast is unknown, as well as to why so many children were inside a military-style base. On May 8, the week before the incident, an ISIS-linked group calling itself "Supporters of Islamic State of Iraq and Syria in Jerusalem" fired a rocket at a Izzadin Kassam base near Khan Yunis. Hamas is often criticized for the use of children for terror purposes. According to MEMRI, children in Gaza attend summer camps, where they use real firearms and are taught the importance of "liberating all of Palestine." Children also learn about topics such as the "right of return," Jerusalem, and the Al-Aqsa Mosque. A 2012 paper written for the Journal of Palestine Studies reported said that Hamas used children to help them dig numerous tunnels into Israel and Egypt, of which at least 160 of the children died.