After 62 years, Abed Abu Ajamiyeh is going back to high school. 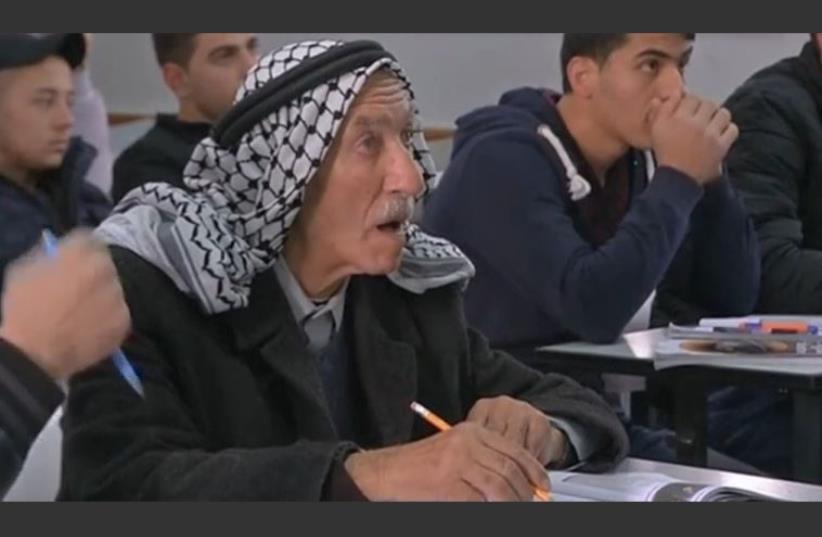 Palestinian Abed Abu Ajamiyeh, 77, is enrolled in high school classes
(photo credit: REUTERS)
Advertisement
A 77-year-old Palestinian man has enrolled in high school classes in the West Bank. He says he is looking forward to going to university next year.Abed Abu Ajamiyeh, father of six boys and three girls, had to cut short his education when he was in sixth grade in 1953 because the school in his village did not have higher levels.After 62 years, he is back to finish high school."We lack education here. I advise every child to get educated because through education they can reach anything they want," he said.Sitting in a class of 31 students aged between 19 and 28, Abu Ajamiyeh hopes to be a positive influence on his classmates."If I succeed, my ambition is to give hope for those younger than me. I tell the youth from first grade to twelfth grade that everyone is responsible to get education if she/he is able to get an education because it benefits them. Education gives one confidence," he added.Advisor At Hebron's Directorate Of Education, Atif Al-Jamal, said that it was good for people like Abu Ajamiyeh to get a second chance at an education."Those who lost hope at the beginning of their life should get an education, we are happy to hear that they have courage and want to get education," said Atif Al-Jamal.The school's headmaster, Abed Abu Snianah, said it was important to support those who were unable to finish their education."We have been offering evening classes for more than eight years in this school. Through this way we give the right to students who have been deprived whether from oppression or those who have been in jail and didn't have the chance to continue their education, and there are some who had to leave school because of social circumstances. So we have this program for the students to get a second chance," said Abu Snianah.According to a World Bank study in 2013, 82 percent of secondary education age students are enrolled in secondary education in the West Bank and Gaza.The adult literacy rate as of 2014 was 96 percent.