According to Abbas, Trump’s decisions on Jerusalem have disqualified the US from sponsoring the peace process between the Palestinians and Israel. 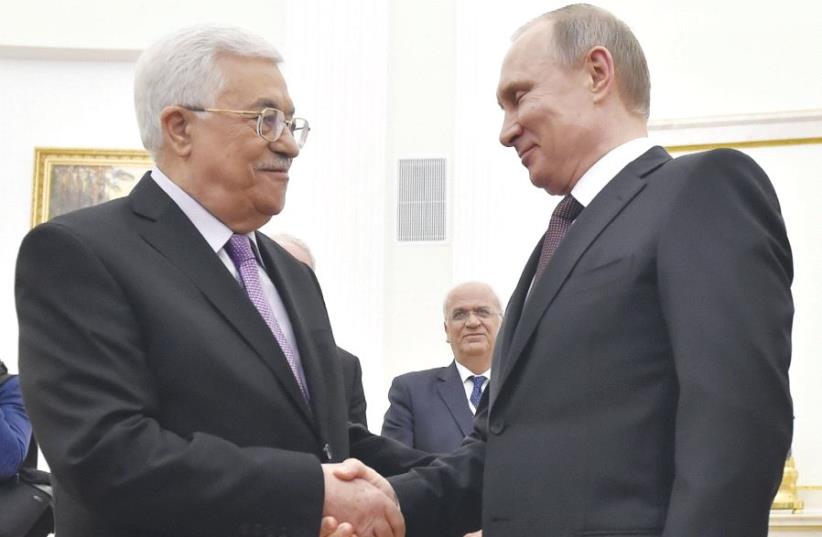 Russian President Vladimir Putin (right) shakes hands with PA President Mahmoud Abbas during their meeting at the Kremlin in Moscow, on April 18 last year
(photo credit: REUTERS)
Advertisement
Palestinian Authority President Mahmoud Abbas will meet Russian President Vladimir Putin in Russia in the first half of February to discuss US President Donald Trump’s changes to American policy on Jerusalem, a Palestinian diplomat said on Thursday.
US President Donald Trump recognizes Jerusalem as Israel"s capital and announces embassy to relocate
Abbas, a graduate of a university in Russia, last visited Putin in Moscow in May.“[Abbas] will discuss with him the situation in the Middle East including Trump’s recognition of Jerusalem as Israel’s capital,” the PLO Ambassador to Moscow Adbel Hafiz Nofal told Sputnik, a Russian-government owned website.In a speech at the White House in early December, Trump recognized Jerusalem as Israel’s capital and initiated the relocation of the US Embassy in Tel Aviv to the holy city, breaking with decades of American policy.Russia has publicly opposed Trump’s decisions on Jerusalem.In the past couple of weeks, Russia voted in favor of United Nations Security Council and General Assembly resolutions criticizing Trump’s decisions on Jerusalem.In a phone call, Fatah Central Committee member Azzam al-Ahmad said that Abbas will ask Putin “to undertake a greater and more meaningful role in the peace process in order to save it.”Palestinian officials have said they would like to establish a multilateral framework for the peace process that includes Russia.Israel has long opposed initiatives to grant countries other than the US a prominent role in the peace process.According to Abbas, Trump’s decisions on Jerusalem have disqualified the US from sponsoring the peace process between the Palestinians and Israel.