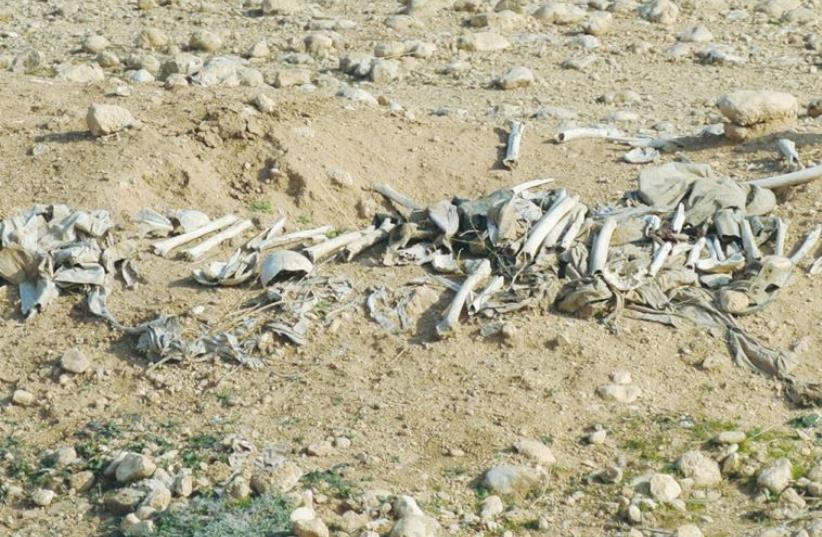 A MASS GRAVE of Yazidi victims of Islamic State is seen near Sinjar, Iraq.
(photo credit: SETH J. FRANTZMAN)
Advertisement
The West has a moral obligation to recognize that Christianity in Iraq and the region is being diminished, a human rights activist told The Jerusalem Post on Monday.“Nobody is opening the doors to the Christians and Yazidis, just like what happened to the Jews,” said Charmaine Hedding, who is involved with helping Christian refugees in Iraq, Turkey, and Syria, and who has traveled numerous times to Iraq and Turkey on behalf of work carried out on behalf of the Shai Fund. She said the organization is also operating in Syria.Hedding, speaking on the sidelines of the Jerusalem conference “The Cry from the Frontlines: Iraq and Syria,” noted that she was aware of persecution against Christians in Iraq since 2000, years before the Syria conflict began.Asked if Western countries are reluctant to take in Christians and Yazidis because of the problems and crimes related to the current influx of Middle Eastern migrants into Europe, she replied that this seems to be the case, yet Christians would have an easier time than Muslims integrating into Western countries because of common Judeo-Christian values.Jonathan Spyer, a Middle East analyst and director of the Rubin Center at IDC Herzliya, told the Post that the Christians’ and Yazidis’ fate are tied in with that of the Kurds.Massacres committed by Islamic State against Yazidis, such as in Iraq’s Sinjar, mean they “can’t trust their Sunni neighbors again.”Spyer, who has traveled widely in Syria and Iraq and is a regular contributor to this newspaper, mentioned that Yazidi-Kurdistan Regional Government relations are tense because Yazidis blame the KRG for withdrawing forces and not defending them at a critical time in the summer of 2014.Regarding the breaking down of regional borders, he sees a possibility that they could remain, but within them there would be various entities acting as de facto autonomous regions.Asked for his policy preference, Spyer asserted that a division of Iraq and Syria along new borders would be best.Regarding possible Kurdish independence, the Middle East expert noted the internal Kurdish political visions as one factor hampering the effort.Seth J. Frantzman, this paper’s op-ed editor who has traveled to Iraqi Kurdistan, said the main thing people should recognize is that “what is happening is a genocide.”It also shows “the dereliction of duty of the international community,” he said at the conference Christians and Yazidis will have to decide their fate, he said, adding that for Yazidis, immigrating to countries in the West would also have a down side since their distinct culture would likely disappear as they assimilated into their countries.“This cultural extinction would, in a way, achieve what Islamic State wanted all along – to cleanse minorities from the region,” continued Frantzman."Sunni Islamist fascism like Islamic State is successfully destroying all minorities in this region. It is a sad story and that’s why Kurds are particularly interesting and heroic.”Asked what he saw in terms of Kurds support for independence during his travels to Kurdistan, Frantzman responded that the vast majority support independence.The West should have defended the Yazidis immediately when Islamic State began attacking them.“They knew what was happening since Christians had already been [ethnically] cleansed from Mosul,” he said.“If the Auschwitz concentration camp had existed today, nothing likely would have been done,” asserted Frantzman, pointing out that today there are no Western leaders with a backbone like former British prime minister Winston Churchill.Chris Mitchell, Middle East Bureau Chief of the Christian Broadcasting Network, said that for Christians or minorities in the region, it is “either pay the ‘jizya’ [Islamic poll tax paid by non-Muslims], convert, or die.”The future for Christians in the region “looks very bleak unless there is a groundswell of support from the West and a military attempt to take back territory from Islamic State.”