Al-Qaida: ISIS divides Muslims instead of targeting Jews and Christians

Jihadi group's statement appeals to ISIS members, especially those recruits who joined the group from abroad, and called on them to "recognize its [ISIS's] deviance, repent and leave it." 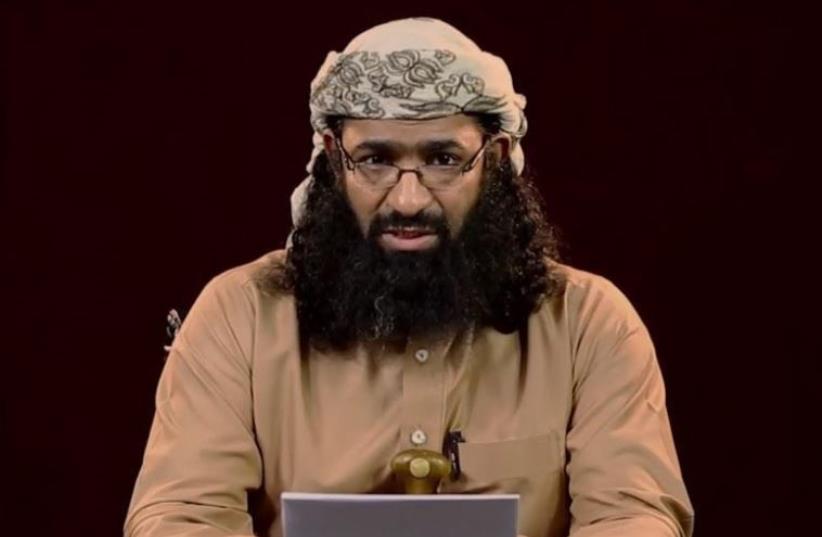 Al-Qaida in the Arabian Peninsula official Khaled Batarfi ‏
(photo credit: MEMRI)
Advertisement
In response to a recent ISIS statement stating the illegitimacy of all other jihadi groups, al-Qaida in the Arabian Peninsula and al-Qaida in the Islamic Maghreb released a joint video statement on Monday denouncing the group that controls large swathes of Syria and Iraq, In his statement rejecting other groups, ISIS Spokesman Abu Muhammad al-Adnani threatened to kill anyone who actively refused to accept its authority and threatened dissenters with a "head-splitting bullet or a sharp knife on [their] necks," MEMRI reported.  In a video released on the two al-Qaida groups' Twitter accounts, AQAP official Khaled Batarfi read a statement reiterating their rejection of Islamic State as the legitimate caliphate.   "We repeat what has already been mentioned by Sheikh Ayman Al-Zawahiri [al-Qaida's leader] and others among the scholars and leaders of the Ummah [the Muslim nation]... We do not acknowledge this caliphate as legitimate, nor do we deem it legitimate to give it an oath of loyalty [bay'a], nor do we see it to be [based] on the noble Prophetic manhaj [methodology]. Rather, some of its authority (power) was gained by coercion, force, shedding blood and pronouncing takfir upon Muslims. Their authority was not gained through shoura [consultation] nor mutual consent," the al-Qaida spokesman Batafari said. The statement also criticizes ISIS for ignoring the Palestinian issue and argues that ISIS has not promoted unity among jihadi factions in light of the Russian and American campaigns in Syria and instead has chosen to declare war on fellow Muslims."Instead of directing their fight towards the enemies of the Ummah, and instead of directing their arrows towards the Jews and Christians, they choose to direct their arrows towards the chests of Muslims," the joint al-Qaida statement charged. The groups criticized ISIS for "sowing dispute among Muslims" which they said only serves the enemies of Islam. "We seek to cooperate with, assist and advise every truthful Islamic group, among the Jihadi and non-Jihadi groups," the statement declared.  "We are a group of construction, cooperation and solidarity. Our path is the path of waging jihad against the enemies of the Ummah and preaching not only to the Muslim masses but to all-mankind. The well-being and interest of the Ummah is our interest. The concerns and priorities of the Ummah are our concerns..."The statement appeals to ISIS members, especially those recruits who joined the group from abroad, and called on them to "recognize its [ISIS's] deviance, repent and leave it."  "You have set out for the sake of Allah and to give victory to the religion of Allah. Some of you migrated from distant lands. Is it right then to ruin this [pure] resolution and intention by pronouncing takfir and shedding the blood of Muslims?!"Earlier this year, al-Qaida leader Ayman al-Zawahri dismissed Islamic State and its leader Abu Bakr al-Baghdadi as illegitimate but said his followers would join them in fighting the Western-led coalition in Iraq and Syria if possible.In an audiotape on the internet, Zawahri said: "We don't recognize this caliphate."It was not clear when the recording was made but references to events suggest it was made towards the beginning of 2015. Islamic State has declared a caliphate in large parts of Iraq and Syria under its control and sought to expand its power in the Middle East, becoming a greater security threat than al-Qaida in the strategic oil-producing region.Despite rivalries between the two Islamist organizations, former Egyptian doctor Zawahri suggested there was still room for cooperation when it came to combating the West."Despite the big mistakes (of Islamic State), if I were in Iraq or Syria I would cooperate with them in killing the crusaders and secularists and Shi'ites even though I don't recognize the legitimacy of their state, because the matter is bigger than that," he said. Reuters contributed to this report.