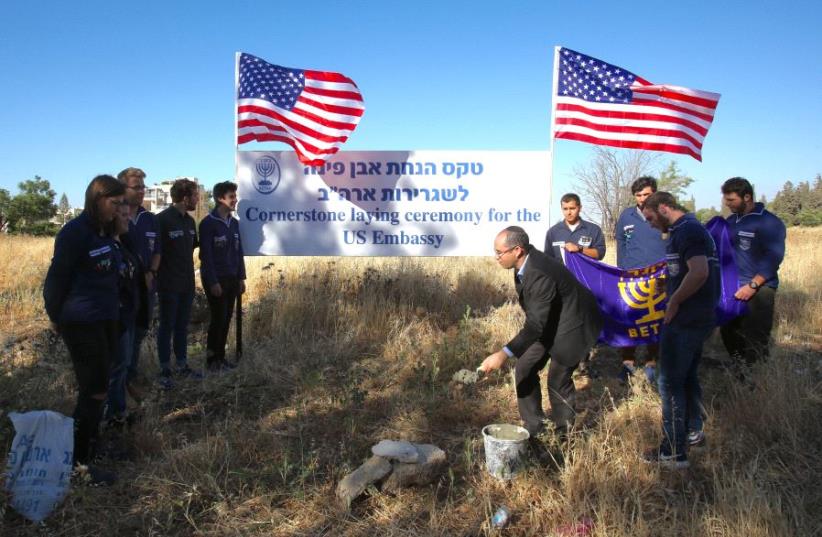 Activists from the Betar Movement laid a “cornerstone” for the American Embassy in Jerusalem Sunday.
(photo credit: MARC ISRAEL SELLEM/THE JERUSALEM POST)
Advertisement
American, Israeli and Jordanian officials all poured cold water on reports that the US was on the cusp of recognizing Jerusalem as Israel’s capital and moving its embassy there from Tel Aviv.Channel 2 News reported on Wednesday that US President Donald Trump may formally recognize Jerusalem as Israel’s capital early next week and direct his staff to prepare for moving the embassy to Jerusalem.Within hours, however, White House spokeswoman Sarah Huckabee Sanders said, “This is a premature report. We have nothing to announce.”Diplomatic officials in Jerusalem followed this by saying they have not heard that any announcement was imminent.Jordan’s King Abdullah, currently in Washington, repeated what he has been saying for months about a possible embassy move: that it would likely set the region on fire.

The Jordan Times reported that Abdullah, in a meeting with US lawmakers, said the embassy move must come within a comprehensive solution that leads to the establishment of a Palestinian state with east Jerusalem as its capital.Moving the embassy at this stage, he was quoted as saying, “would have implications on the Palestinian, Arab and Muslim scene, and would threaten the two-state solution. It could be potentially exploited by terrorists to stoke anger, frustration and desperation in order to spread their ideologies.”According to the report, Abdullah said it was “important that no measures are taken to undermine the US administration’s commendable efforts aimed at resuming the peace process.”Trump promised during the 2016 election campaign to move the embassy to Jerusalem, as mandated by a Congressional law in 1995. But on June 1 he signed a waiver suspending the move for another six months.That period ends this weekend, and Trump will have to decide again whether to sign the waiver or announce that this time the embassy will move to the capital.
Advertisement
Subscribe for our daily newsletter