They said they found Obama's request insulting, with some questioning why the same message is not sent to Christian churches after mass shootings carried out by non-Muslims. 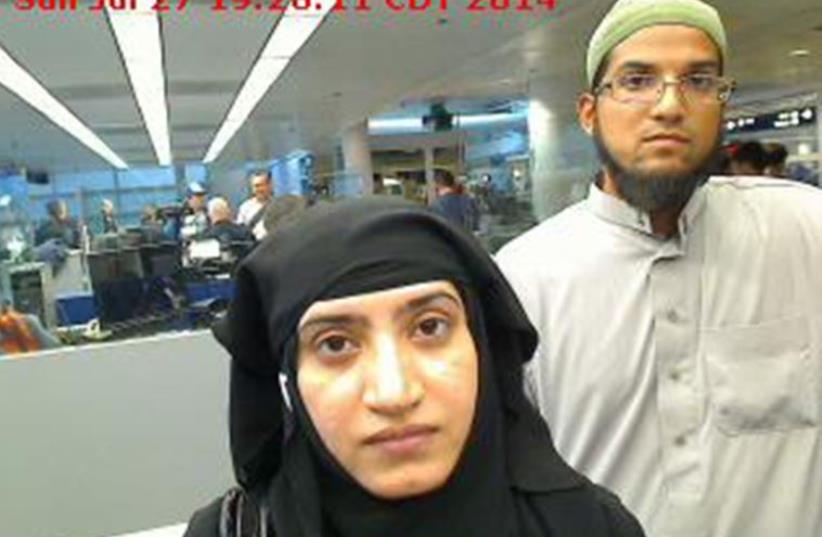 Tashfeen Malik, (L), and Syed Farook are pictured passing through Chicago's O'Hare International Airport in this July 27, 2014 handout photo obtained by Reuters
(photo credit: REUTERS)
Advertisement
US President Barack Obama's request to American Muslims that they must help "root out" extremists in their midst received an angry response inside mosques in a part of California where four men were recently arrested for conspiring to aid Islamist militants.At the West Coast Islamic Society in Anaheim, southern California, where two 24-year-old men arrested in May accused of conspiring to aid Islamic State had worshipped, the message was clear: there is no trust of the Federal Bureau of Investigation or the US government.Imams and workers at mosques also described the arrested Islamic State sympathizers as victims of over-zealous law enforcement, illustrating the difficulty the Obama administration may face in convincing some Muslim leaders to identify and report radicals in their midst to US authorities.They said they found Obama's request insulting, with some questioning why the same message is not sent to Christian churches after mass shootings carried out by non-Muslims."It is unfair to speak about the Muslim community in this way," said Moustafa Kamel, the imam of the West Coast Islamic Center. An immigrant from Egypt 13 years ago, Kamel added, "there is a lot of suspicion of the FBI here."Obama's call for greater self-policing of America's 2.8 million Muslims, made in a rare Oval Office address on Sunday, was followed by a similar appeal from Jeh Johnson, his Homeland Security chief, at a Virginia mosque on Monday. Johnson called it an "ask" of Muslim communities.Obama and Johnson made their appeals after last week's massacre of 14 people in San Bernardino, California, by a U.S.-born Muslim man and his wife, a Pakistani national.The FBI said the two had long been radicalized and conspired to commit terrorism without detection, underlining the challenge of finding so-called homegrown, self-radicalized extremists inspired by Islamic State propaganda.Kamel's mosque is where Muhanad Badawi and Nader Elhuzayel, both 24, had occasionally worshipped in the months before the FBI arrested them in May on charges of conspiring to join IS overseas.According to an FBI affidavit in support of the arrests, the men drew the attention of authorities with inflammatory comments on social media, especially their Twitter and Facebook accounts. According to the FBI, the men professed support for Islamic State and their desire to die as martyrs on the battlefield.The FBI also wire-tapped their phone conversations. In one, the two discussed where they would like to die as martyrs, and both agreed on Syria. In March 2015, according to the FBI affidavit, Elhuzayel was introduced online to a woman in Palestine who professed support for Islamic State. They discussed getting married.On May 21, Elhuzayel was arrested at Los Angeles International Airport, about to board a flight to Tel Aviv, Israel, with a layover in Istanbul, Turkey. According to the FBI, after his arrest, he admitted he had intended to travel to Turkey to join and fight for the Islamic State.Badawi is accused of purchasing Elhuzayel's plane ticket, using his credit card on the travel website Orbitz. Badawi was arrested in Anaheim the same day. Both men are being held without bond. They pleaded not guilty at a hearing in June. Their trial is set for June next year.Taher Herzallaj, the manager at the West Coast Islamic Center, read through the FBI affidavit against Badawi and Elhuzayel, and questioned why they were arrested."They have not said anything here about attacking America or being a threat to US national security," he said. "My guess is they were trying to join ISIS to do something for Syria," he added, using another acronym for Islamic State.Herzallaj added: "There is no trust of the FBI here. They spy on us. We feel like we are always under surveillance. And out of all the hundreds of mass shootings, I don't see Obama talking to the Christian communities about them. It's insulting he would say that."The arrests in Anaheim followed the conviction in March of two other southern California men for conspiring to provide material support to terrorists. They had been arrested as they were about to travel to Afghanistan. In April, six Somali Americans were arrested in San Diego and Minneapolis, accused of trying to travel to Syria to join Islamic State.At the Islamic Institute of Orange County, in Anaheim - a city which has a neighborhood called "Little Arabia" - the mosque's imam, Mohammed Faqih, chafes at Obama's request that mosques could do more to root out extremists."I didn't like that," Faqih said. "In these cases such as San Bernardino, the mosques did not play a role. They are loners who got radicalized at home, in front of the Internet. If we suspect anybody, we call it in straight away to the FBI."Shakeel Syed, executive director of the Islamic Shura Council of Southern California, questioned why American leaders did not go on television asking Christian churches to police themselves for white supremacists after the shooting of nine African-Americans in Charleston, South Carolina in June."Asking Muslims to do this is offensive. There is a collective responsibility to address this," he said.But Abdallah Soueidan, owner of Al Amir restaurant in Anaheim and an immigrant from Lebanon, said he welcomed Obama's comments. "We must be more vigilant. And I wouldn't be surprised, or upset, if we came under more surveillance."