Amid violence and chaos, Turkey grapples with turmoil from within and without

The Islamic-animated government of Recep Tayyip Erdogan’s declared policy of "zero problems with neighbors" is in tatters. 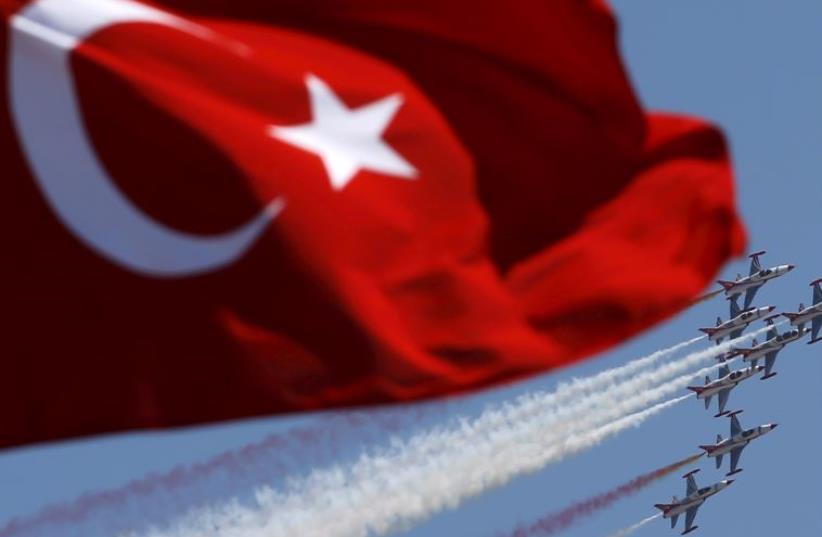 Turkish Stars, the aerobatic team of the Turkish Air Force, perform a maneuver during a ceremony marking the 93rd anniversary of Victory Day in Ankara
(photo credit: REUTERS)
Advertisement
Turkey marked the 93rd anniversary of Victory Day in its 1922 War of Independence against Greece on Sunday. While many commercial and residential buildings were blanketed with the Turkish red flag featuring a crescent and a white star, the absence of parades in the country’s largest city, Istanbul, was telling. The deaths of scores of Turkish soldiers and police officials in the resurgent conflict against the separatist Kurdish PKK organization in the southeast prompted low-key celebrations.The Islamic-animated government of Recep Tayyip Erdogan’s declared policy of “zero problems with neighbors” is in tatters. “No internal or external power threatening our existence will be able to cast a shadow over our independence and future,” said Erdogan at a rally in Ankara.“It is chaotic. There is a lot going on in eastern Turkey, where the Kurds live, a lot of killing on both sides,” Rina Altaras, an academic in Istanbul, told The Jerusalem Post on Tuesday.With early elections set for November 1, Turkey is immersed in three violent conflicts: the Kurdish Workers’ Party (PKK) effort to gain autonomy; the emergence of Islamic State terrorism on the southern border with Syria; and left-wing terrorism from the Revolutionary People’s Liberation Party-Front.The effects on tourism are clear. A tourist guide told the Post that a morning ship tour of the Bosphorus Strait typically attracts 100 people but on Monday a mere six people registered for the excursion.She bemoaned the lack of tourists over the last few weeks. Nearly two weeks ago, two members of a “terrorist group,” according to the Istanbul authorities, attacked the Dolmabache Palace with an automatic rifle and grenades. A police officer was injured. Asked about Israeli tourists, the tour guide said the “Jewish people” are not running scared of terrorism, in contrast to the Europeans. No Germans have participated in the tours since the outbreak of violent unrest, she said.The instability in Turkey has spilled over into the news sphere. After Turkish authorities raided the media offices of an enterprise affiliated with the US-based Muslim cleric Fethullah Gulen, protests erupted on Tuesday in Istanbul. Roughly 200 secular and religious Turks demonstrated in support of the media conglomerate Koza Ipek that operates newspapers and television stations critical of the government. Erdogan considers Gulen - his former ally - an enemy of the AK Party. When asked about the protest, a math teacher told the Post that the government is trying “to shut down other people’s voices. They don’t want any voice.” He said the government’s crackdown on the media is related to the elections - an effort to stop oppositional coverage of the government - and the protest is a way “to support the free media.”Unsurprisingly, Erdogan’s preoccupation with Israel is mirrored in the government-dominated press. The Daily Sabah daily - which supports Erdogan’s ruling AK Party - headlined an article on Tuesday: “Soldier should have been able to kill her, Israeli culture minister says,” referring to a Palestinian woman who tried to prevent an IDF soldier from detaining a boy during a rock-throwing incident.Altaras, the Turkish academic, told the Post, “Turkey-Israel relations are very complicated. Business is going on on the surface. Politically, relations are very bad.” It is a scary period for Turkish Jews and other minorities, she said. Erdogan’s era has long dissolved whatever remains of Turkish Republic- and Ottoman Empire-period romantic rhetoric that Jews “migrated to the land where the flag with the crescent brought justice and tolerance.”Benjamin Weinthal reports on European affairs for The Jerusalem Post, and is a fellow for the Foundation for the Defense of Democracies.