Analysis: Israel had no hand in Hezbollah commander's death

If past cases are anything to go by, Hezbollah is doing everything it can to avoid a direct conflict with Israel. 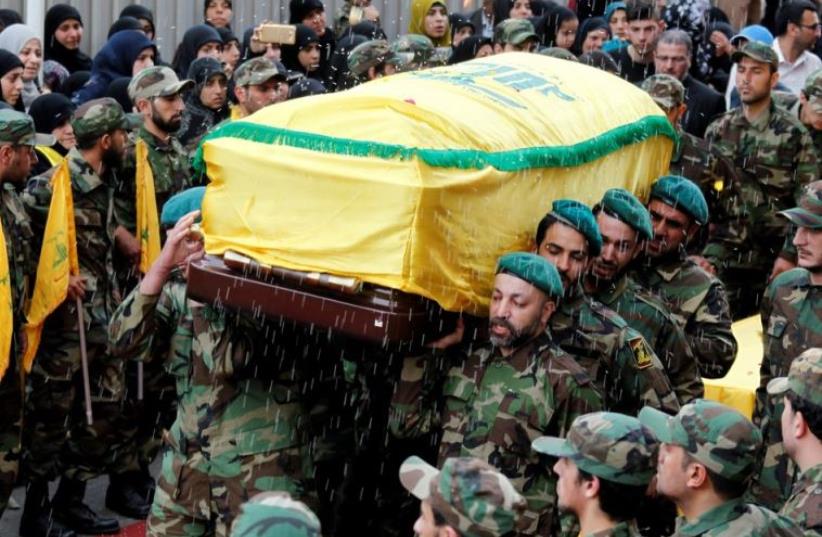 Rice is thrown as Hezbollah members carry the coffin of top Hezbollah commander Mustafa Badreddine
(photo credit: REUTERS)
Advertisement
Israel did not appear to have a hand in the death of Hezbollah’s chief of staff Mustafa Badreddine in Damascus early Friday morning, and the organization’s conduct over the weekend is a strong signal that it wishes to avoid any escalation with Israel.Badreddine was Hezbollah’s chief of operations, and was second in command to the group’s leader, Hassan Nasrallah.He was the successor of the late Hezbollah chief of staff Imad Mughniyeh, who was reportedly assassinated by an Israeli hit team in Damascus in 2008.While Hezbollah has said that Badreddine was killed by rebel artillery fire, the circumstances surrounding his death are still a mystery.In general, though, Hezbollah has shown no desire to use this assassination to launch a new conflict with Israel.According to foreign reports, Israel and Hezbollah are already engaged in a sort of “shadow conflict” that revolves around the Shi’ite organization’s attempts – with Iranian assistance – to import heavy rockets and missiles into Lebanon, and Israeli action to thwart those efforts.Hezbollah’s overseas terrorist cells also regularly plot attacks on Israeli and Jewish targets abroad, and these efforts, too, have been repeatedly thwarted by the defense establishment over the years, far from the media spotlight.This is a high-stakes and ongoing quiet war in which the smallest miscalculation could quickly snowball into a wider conflict, even in the absence of desire, on either side, for that to happen.If past cases are any indication, Hezbollah is doing everything it can to avoid a direct conflict with Israel.In January, after Lebanese terrorist Samir Kuntar was reportedly killed by Israel in Damascus, Hezbollah responded with a minor border attack that damaged two IDF armored vehicles working near the Lebanese border, but failed to cause any injuries.The attack was Hezbollah’s way of “settling accounts” without triggering a war.That is an indication of Hezbollah’s reluctance to open a new front with the IDF, despite the fact that it has 100,000 rockets and missiles all aimed southward at Israel.To be sure, Hezbollah is the No. 1 conventional security threat to Israel today. The vast rocket arsenal in the Lebanese Shi’ite organization’s possession, which includes GPS-guided munitions, and its highly trained guerrillas are the most significant military- terrorist force facing the IDF.But, Hezbollah is neck deep in the Syrian civil war, and this intervention is costly. It has lost 1,600 armed fighters and suffered 5,500 injuries among the ranks (who total some 20,000 conscripted men and a further 20,000 reservists).Hezbollah’s money situation is not great either as it faces new financial burdens, in the form of a rehabilitation program for its wounded Syria veterans, and the need to pay pensions to its personnel.Within Lebanon, Hezbollah faces pressure over the fact that it pays for its support of the Alawite regime in Damascus with the blood of young Lebanese Shi’ite fighters.Hezbollah is also acutely aware that Lebanon depends heavily on the tourism industry (based on 2.5 million visitors a year), and the financial services industry, which serves the entire Arab world.Both would be utterly compromised by the prospect of a new war with Israel.Adding to the pressure on Nasrallah is the presence of 1.4 million Sunni-Syrian refugees in Lebanon who have changed the demographic balance to the detriment of the Shi’ites.Hezbollah has learned many valuable operational lessons in Syria, such as how to storm enemy positions and how to seize and hold territory, and it could seek to use what it learned against Israel in any future clash.But the organization’s priority is Syria. Iran, which arms, funds and backs Hezbollah, is pressuring Hezbollah to send even more men to fight the Syrian rebel organizations.A decade after the Second Lebanon War, Hezbollah and Israel are monitoring each other very closely and are engaged in alleged strikes and a large-scale arms race. Yet, neither has any interest in a new war, and the fact that Hezbollah did not blame Israel for the death of Badreddine is yet another indication that the Iranian-backed guerrilla group will do everything it can to keep its border with the Jewish state quiet.