Analysis: Egypt still trying to find a fitting answer to a complex situation

Obama, who has not severed his links with the Brotherhood, is apparently not giving enough weight to the decisive role played by Egypt in the fight against radical Islam. 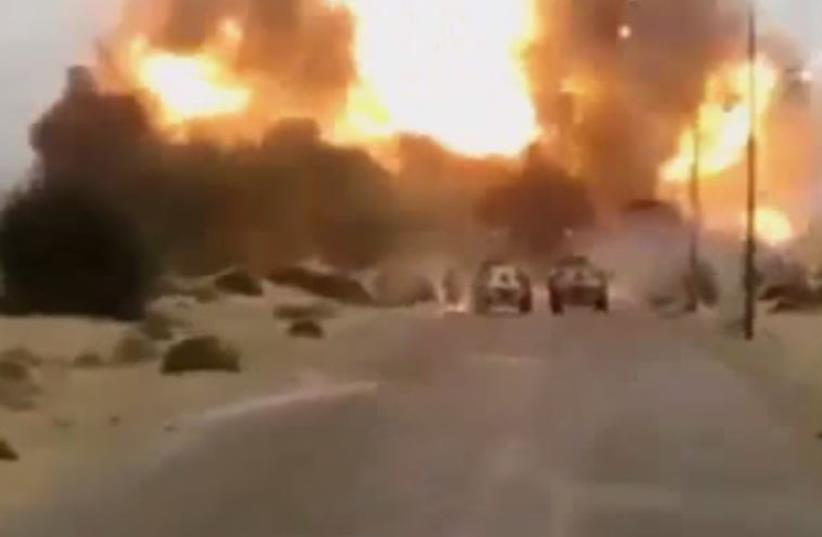 Alleged picture of today's Sinai attacks surfaces on social media
(photo credit: ARAB SOCIAL MEDIA)
Advertisement
Fighting broke out Wednesday morning in the northeastern section of the Sinai Peninsula as the local branch of Ansar Beit al-Makdis, an organization that has sworn allegiance to Islamic State, simultaneously targeted a number of military targets in what was undoubtedly the largest attack ever in the region.By evening the battle was still ongoing, and the Egyptian military already had suffered double-digit casualties, with expectation of more.Incredibly, the all-knowing security services had no advance warning of a major concerted operation that must have involved considerable planning: preparing arms and ammunition; vehicles; surveillance; as well as communication channels to coordinate the moves.
Alleged video of today"s Sinai attacks surfaces on social media‏
The thousands of Egyptian soldiers stationed in Sinai heard and saw nothing; the roadblocks reported no suspicious traffic. Apache helicopters crisscrossing the skies were unaware of what was happening. Perhaps worse, the surprise was such that soldiers reacted sluggishly and only after having suffered significant losses.Egypt is still trying to find a fitting answer to a complex situation.It does not lack troops on the ground – Israel has agreed to let it move as many soldiers into Sinai as is needed to fight terrorism. The problem is that the Egyptian Army lacks special forces trained to fight in the desert and mountainous regions where terrorists are probably sheltering and getting organized.Furthermore, those terrorists are aided and abetted by the Beduin population. Neglected for decades by the Cairo government, the Beduin were easily swayed by elements of radical Islam trying to infiltrate the area and prepared to pay well for their assistance.It started some 15 years ago, as Beduin helped smuggle missiles and explosives dispatched by Iran into Gaza, using the hundreds of tunnels Hamas had built under the Egyptian border.Then-Egyptian president Hosni Mubarak turned a blind eye, believing it was “not his job” to supervise what was getting inside Gaza and he did not foresee the danger for his country in spite of Israeli warnings.His fall was a near fatal blow to the security apparatus of Egypt, especially in the Sinai Peninsula, where it has yet to recover.During his short tenure, 2012-2013, president Mohamed Morsi, a dedicated Muslim Brother, gave radical organizations in Sinai a free reign and deliberately prevented the army – led by general Abdel Fattah al-Sisi, whom he himself had appointed minister of defense – from acting.Today, Egypt is facing a well-organized terrorist force familiar with the area, which has the support of Beduin, elements from Gaza and even from Libya, where Islamic militias are active and infiltrate arms and militants into Egypt. The ouster of Morsi and of the Muslim Brotherhood energized Islamic movements that are receiving information and intelligence from the Brothers regarding suitable targets to damage Egyptian infrastructure and economy.President Sisi had intended focusing all his efforts on economic development to lift Egypt out of its catastrophic situation. He has met with no little success – he is about to open a second Suez canal, which will halve the time needed for the crossing and triple revenues.He has increased electricity production and canceled 80 percent of energy subsidies. The International Monetary Fund has applauded the beginning of a modest economic growth – 3 percent.The president has many other projects, but is thwarted by terrorism not only in the peninsula but in the whole of the country – from Cairo, where the public prosecutor was assassinated two days ago, to distant provinces.He also is working to reform the way Islam is taught. Yet, the Egyptian president is not getting any help from the United States or Europe, both still calling him a military dictator who forcibly ejected a democratically elected president. Neither understood that Morsi was about to set up an Islamic dictatorship.US President Barack Obama, who has not severed his links with the Brotherhood, is apparently not giving enough weight to the decisive role played by Egypt in the fight against radical Islam. Far from granting the country the military and economic assistance it needs, he only recently restored the supply of a measure of military assistance, while still refusing to let Egypt get sophisticated equipment that would make it easier for the army to engage in guerrilla-type warfare in the difficult Sinai terrain.The writer, a fellow of The Jerusalem Center for Public Affairs, is a former ambassador to Romania, Egypt, and Sweden.