As Tehran uses the post-sanctions windfall to finance advanced weapons and terror networks for Assad, Hezbollah and other allies, the violence will increase, as will the exodus from Syria. 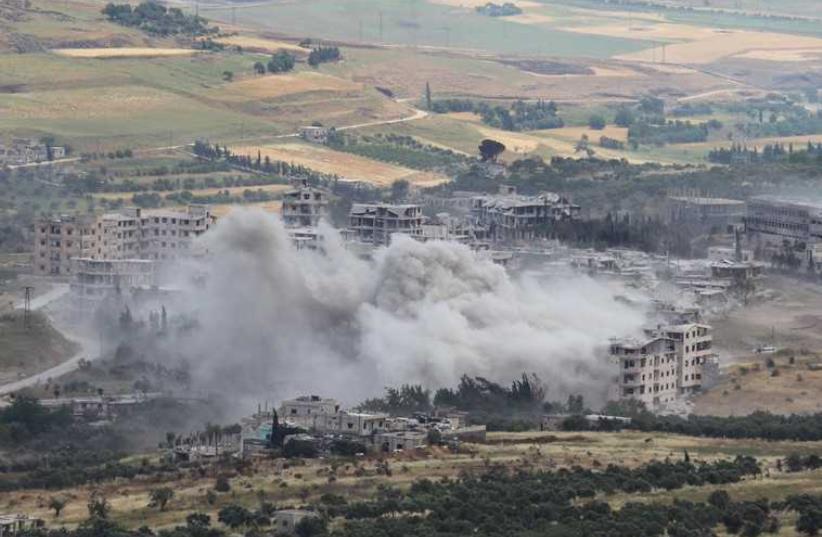 Smoke rises from buildings near the national hospital, after what activists said was shelling by warplanes loyal to Syria's President Bashar al-Assad in the town of Jisr al-Shughour, Idlib province May 22, 2015
(photo credit: REUTERS)
Advertisement
While Germany and Austria are in a celebratory mood about absorbing Syrian refugees, European politicians have ignored Iran’s role in producing the waves of desperate Syrians fleeing to Europe.To stem the flow of refugees and stop the raging bloodbath in Syria, Europe has showed little appetite to confront dictator Bashar Assad’s regime.“The refugee crisis is a direct consequence of European and Western paralysis over Syria.Calling for Assad’s ouster was easy, but they did nothing as Iran and Russia propped him up,” Prof. Gerald Steinberg, a political scientist at Bar-Ilan University, told The Jerusalem Post on Monday.Iranian Foreign Minister Mohammad Javad Zarif said Monday that critics who demand that Assad be deposed “are responsible for the bloodshed in Syria.” He added that the call for Assad to resign has extended the Syrian civilian war.“Peace will not return to Syria with the slogans we are hearing from Syria’s neighboring countries,” Zarif said in a direct reference to Turkey and presumably also to the Sunni Gulf states supporting rebel groups seeking Assad’s ouster.With Iran slated to receive some $150 billion in sanctions relief as part of an agreement to curb its alleged nuclear weapons program, Tehran’s rulers can funnel fresh funds into Assad’s war machine. According to leading Iran expert and international journalist Amir Taheri, “more than 30 Iranian companies and banks are doing business with the EU.”With Iran’s military apparatus as major booster, Assad has murdered eight times as many Syrians as Islamic State. Since 2011, Assad’s war on Syrian civilians has resulted in the deaths of 250,000 people.Fred Hiatt, the editorial page editor for The Washington Post, issued a scathing indictment of Obama’s failed Syrian policy on Monday, which is largely a mirror image of an impotent European posture: “Obama – who ran for president on the promise of restoring the United States’ moral stature – has constantly reassured Americans that doing nothing is the smart and moral policy.He has argued, at times, that there was nothing the United States could do, belittling the Syrian opposition as ‘former doctors, farmers, pharmacists and so forth.”’ Obama “soothed the American people into feeling no responsibility for the tragedy,” Hiatt wrote. European leaders have not only conditioned their populations for inaction against Assad, but have taken the political lead.Take the example of the British parliament’s rejection of military strikes against Assad in 2013. German Chancellor Angela Merkel vehemently opposed military action.After Assad used chemical weapons to murder 1,400 Syrians in 2013, a poll for German television station ZDF showed 58% opposed intervention.The Merkel administration – and former social democratic chancellor Gerhard Schröder – approved chemical agent sales to Syria. The chemical deliveries, which took place starting in 1998 and ran until 2006, were believed to be later converted into Assad’s poison gas arsenal.Merkel and her counterparts in France, Francois Hollande, and in Britain, David Cameron, are working feverishly to contain a European problem. However, the comment of Kinan Masalmeh, a 13-year-old Syrian refugee in Hungary, fails to resonate on a broader political level:“Please help the Syrians … The Syrians need help now. Just stop the war. We don’t want to stay in Europe. Just stop the war.”Steinberg told the Post that the policy of malignant neglect toward Syrian refugees is a kind of Act 2 of the Iran nuclear deal.“The same pattern applies to Iranian nuclearization, where years of talks and concessions were useful in avoiding confrontation.But now, as Tehran uses the post-sanctions windfall to finance advanced weapons and terror networks for Assad, Hezbollah and other allies, the violence will increase. To prevent an even greater bloodbath and exodus, Europe and the US will need to abandon the myths, develop a workable policy, and act, ” said Steinberg.His recommendation: “The first step is to declare and enforce no-fly zones and protected humanitarian zones.The next phase, including regime change, would involve more costs in the short term, in order to gain long-term stability.But as long as European officials are paralyzed by a dream of outlawing warfare, the consequences will grow.”With Austria’s announcement on Monday that border controls will be reimposed to block new waves of refugees, will Europe return to business as usual? The writer is a fellow at the Foundation for Defense of Democracies.