The carnage is a major “success” for Islamic State, which has in recent months morphed its insurgency against security forces in Sinai into a campaign against Christians. 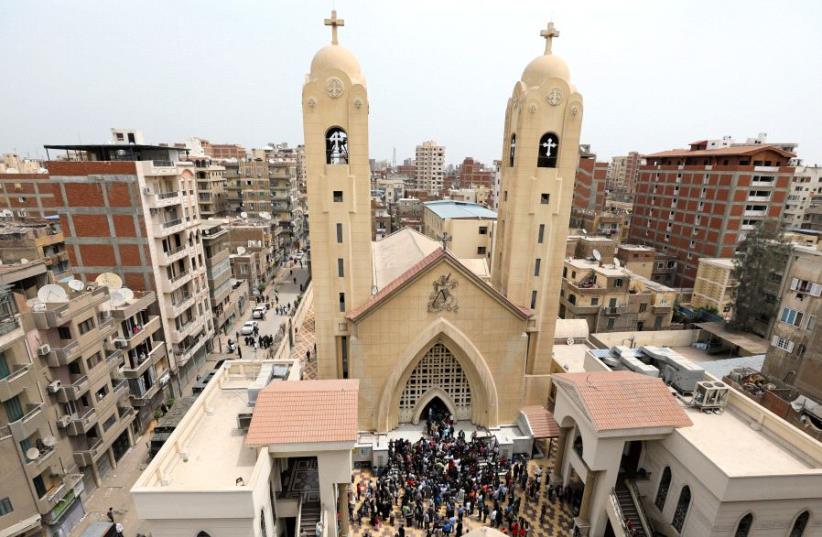 Egyptians gather in front of a Coptic church that was bombed on Sunday in Tanta, Egypt, April 9, 2017
(photo credit: REUTERS)
Advertisement
The bombings of two Egyptian churches by Islamic State on Palm Sunday emphasize the grim reality that nowhere in Egypt is safe if you are a Coptic Christian. The day is normally a festive one commemorating the entry of Jesus into Jerusalem, according to the gospels, but instead it was turned into a bloodbath.
Deadly bombing of Coptic Christian church in Egypt (credit: REUTERS)
Hardly had Coptic Christians any time to absorb the devastating blow of a bombing at Saint George’s Church in Tanta, less than a hundred kilometers outside Cairo in the Nile Delta, when a suicide bomber’s explosion killed at least 25 at Saint Mark’s Cathedral in Alexandria, where Pope Tawadros had just attended Mass. The bombings spread terror and cast doubt over the ability of the government to secure Pope Francis during a planned visit to Egypt later this month.The carnage is a major “success” for Islamic State, which has in recent months morphed its insurgency against security forces in Sinai into a campaign against Christians that reaches deep into the heartland of Egypt. Not only did ISIS kill more than 40 “infidels” on Sunday, it succeeded in challenging the very legitimacy of the regime of President Abdel Fattah al-Sisi and raising the specter of Egypt descending into sectarian conflict and disarray like Syria and Iraq.“This is a message from the terrorist movement that ‘we are here and can reach anywhere in Egypt,’” said Naji Shurrab, a political scientist at Al-Azhar University in Gaza.“The message is, ‘We are alive and strong.’ They want to spread fear in the hearts of people and weaken the economy of Egypt. This harms tourism and foreign investment.”But the main goal, Shurrab said, is “to make a separation between Muslims and Christians and to start a religious conflict in Egypt. They know the weakest point is to aim against Christians. They want to make Egypt more divided, to weaken the strength of the state and to harm Sisi, particularly after his visit to the US and promise to put an end to terrorism.”For Islamic State, striking the Copts is not only a religious imperative, it is a way of attacking the regime. Sisi has reached out to Copts, who make up about 10% of Egypt’s population, and has sought to improve Christian-Muslim relations. He visited Pope Tawadros early in his tenure and encouraged the passage of a law making it easier for the Coptic community to restore churches.On Sunday, Sisi sent a message of condolence to Christians after the first bombing, Egypt’s al-Youm al-Sabi website reported.It also said six Muslims had died in the second attack. “This perfidious terrorism that targets the country’s Christians and Muslims will never take away the greatness of the Egyptians and their genuine desire to confront the forces of evil,” it quoted Sisi as saying. “Indeed, it will increase their insistence to traverse this tribulation and move forward in the process of achieving security, stability and full development.”The heightened targeting of Christians began with the suicide bombing of the largest Coptic cathedral in Cairo by Islamic State late last year, killing 29 people and wounding 47 others. In February, seven Christians were killed in Islamic State attacks in northern Sinai, according to Al Jazeera.This prompted the flight of some Christians from El Arish in North Sinai to other parts of Egypt. But now, they are finding they are not safe there, either.In the view of Ofir Winter, an Egypt specialist at the Institute for National Security Studies, Sunday’s bombings “show the difficulties the regime faces in terms of security stability inside Egypt, harms the standing of the regime, which is supposed to provide security, and brings about a worsening of the tense relations between Christians and Muslims inside Egypt.”Like attacks in the Israeli context, he said, the bombings in Egypt “bring out extremism and frustration and bring the tensions to the surface. It’s true that there are messages from the regime to express solidarity with the Copts, but alongside this tensions rise between the communities.”For the regime, Winter continued, the bombings appear to point out that it is unable to fulfill its promise of stamping out terrorism and providing security and stability, in contrast to the chaos in Syria, Libya, Yemen and elsewhere in the region.“The regime’s message has been that things are difficult here, but look at other countries – it could be worse. This message has been dealt a blow,” he added.