Some remain skeptical about the effectiveness of Saudi led efforts of unifying status-quo Sunni powers against Iran. 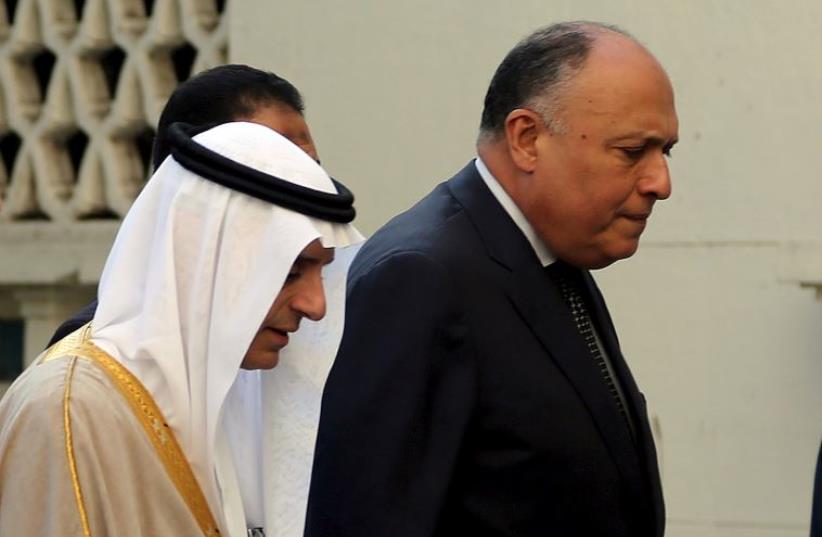 Saudi Foreign Minister Adel al-Jubeir and Egypt's Foreign Minister Sameh Shoukry
(photo credit: REUTERS)
Advertisement
Recently signed agreements between Saudi Arabia and Egypt appear to be part of a broader Saudi effort to build a regional Sunni alliance against Iran, yet the results of such an alliance are still lacking.The Saudi-led coalition battling the Iranian-backed Houthis in Yemen, moves by Saudi Arabia and other Gulf states to crack down on Hezbollah, and Gulf funding to Syrian rebels, are the strongest actions taken to date against the Iranian led Shi’ite alliance.However, in terms of a broad military alliance that could prove effective against Iran and its allies, Saudi success is debatable.In what appears to be part of this alliance building, Saudi King Salman continued on from his visit to Egyptian President Abdel Fattah al-Sisi to meet with Turkish President Recep Tayyip Erdogan on Tuesday.Meanwhile, Saudi Deputy Crown Prince and Defense Minister Mohammed bin Salman visited Jordan’s King Abdullah on Monday, jointly rejecting Iranian interference in the region’s affairs and igniting sectarian strife, the Saudi Gazette reported.Israel is not opposed to the return of two Red Sea islands from Egypt to Saudi Arabia or the plan to build a bridge connecting the two Arab countries, because it sees the Arabs trying to unite against the Iranian threat.“It relates to us and it does not bother us,” MK Tzachi Hanegbi, who heads parliament’s foreign affairs and defense committee, told Israel’s Army Radio in an interview.“The Saudis, who are committed to freedom of shipping under international law, will not harm the essence of the agreement between Egypt and us in this regard and freedom of shipping in Aqaba and Eilat will remain as is.”“We have an interest in expanding the cooperation in the Sunni axis, which is struggling against the radical axis headed by Iran,” said Hanegbi.“The more the Saudis, and the Gulf states in general, connect to the countries with which we are at peace and create with them a strategic front against ISIS, Iran, Hezbollah, against all the players that are our actual enemies, ultimately the effect will be unifying and not weakening.”However some analysts remain skeptical about the effectiveness of Saudi led efforts of unifying status-quo Sunni powers against Iran.“The Saudis set up a headquarters for their Islamic counterterrorism alliance earlier this year, but their announcements of ad hoc coalition building still seem to be more talk than action,” David Andrew Weinberg, a specialist on Gulf affairs and a senior fellow at the Foundation for Defense of Democracies, told The Jerusalem Post on Tuesday.“The Saudi-Egyptian initiative for a joint army against terrorism under the Arab League still lacks specificity or broader support, so it seems unlikely to go anywhere anytime soon,” he said.“Besides, Sisi’s Egypt is too close to Russia to do anything of consequence against Iran in Syria, anyway.”“While Egypt is providing some support to the Saudi-led effort against Iran-backed rebels in Yemen, Cairo disappointed Riyadh by providing far less than the Saudis had originally hoped for,” added Weinberg.