Riyadh is livid that Doha does not toe its stridently anti-Iranian line and has demanded that it cease support for the Muslim Brotherhood and Hamas. 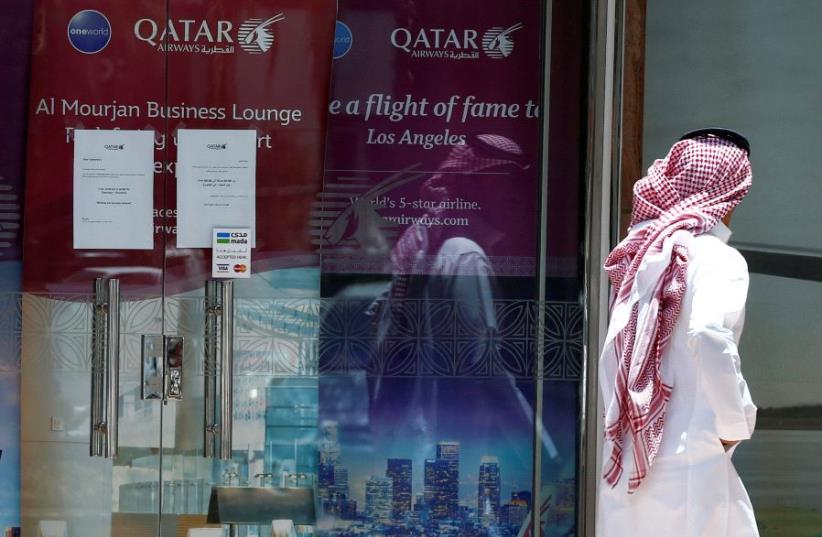 A man walks past Qatar Airways office in Riyadh, Saudi Arabia, June 5, 2017
(photo credit: REUTERS)
Advertisement
Saudi Arabia is keeping the pressure on Qatar two weeks after it led Egypt, the United Arab Emirates and Bahrain in severing ties with Doha and closing airspace and seaports to the tiny Gulf country.The allies are working on a list of all their grievances against Qatar, which until now have been cast mostly in general terms of “supporting terrorist groups” and deploying “hostile media,” a reference to the popular al-Jazeera satellite television station.Riyadh is livid that Doha does not toe its stridently anti-Iranian line and has demanded that it cease support for the Muslim Brotherhood and Hamas. The four allies say Qatar adopts policies that aim to “destabilize the region” and are “threatening Arab national security.”Qatar denies this.Analysts say the steps Saudi Arabia has led in taking against Qatar are actually about showing who is boss in the Arabian Peninsula and that there will be no deviation from Saudi hegemony.“They want to show the Qataris who the landlord is in his own mansion, the peninsula,” says Hebrew University Middle East specialist Elie Podeh. “The Saudi idea is we would like to teach them a lesson and they will have to acknowledge our role and that they need us.”The Saudis were emboldened to act against Qatar by the recent visit to Riyadh of US President Donald Trump and the unqualified backing he expressed for them, in contrast to what they felt was a lukewarm posture on the part of the Obama administration. The moves come three years after Saudi Arabia, Bahrain and the UAE withdrew their ambassadors from Doha over accusations of Qatari support for terrorist groups. The Saudis say Qatar failed to follow through on its pledges to end such support, which had led to the reposting of the ambassadors.Joshua Teitelbaum, a specialist on Saudi Arabia at Bar Ilan University’s Besa Center, says Saudi dissatisfaction with Doha is longstanding.
Saudi-led squeeze on Qatar leaves Hamas facing big questions (credit: REUTERS)
“Saudi Arabia has always been the big fish in the small pond and has never liked Qatar’s desire, since 1995, to have an independent foreign policy. They don’t like Qatar’s punching above its weight.”One of the aspects of independent Qatari policy-making with which the Saudis differed was Doha’s establishing a trade office in Tel Aviv in 1996. It severed trade relations with Israel in 2009 following Operation Cast Lead.Tel Aviv University Saudi specialist Brandon Friedman sees Saudi Arabia as having become more assertive, not out of hegemonic impulses, but of necessity. He noted that in Yemen, the Saudis since 2015, have for the first time led a military coalition.“Independently projecting military power in Yemen is an unprecedented departure for the Saudis,” he said.“Clearly King Salman, operating through the deputy crown prince Mohammed Bin Salman, is acting in a different way than in independent Saudi history since the modern kingdom was established. It’s fair to say that we are seeing a different Saudi Arabia. I’m not sure it’s fair to say we are seeing a Saudi Arabia looking to dominate its neighbors.” Due to Iran and Islamic State, “the Saudis feel threatened in an unprecedented way and they feel they have to play a more central leadership role than in the past. They feel they have to lead the Sunni Arab world in a way they haven’t felt before.“When you look around the Arab world today you see civil war and instability in many key countries and the Saudis perhaps feel this leadership role is one they are playing by default,” Friedman added.In Teitelbaum’s view, there is a good chance the crisis will be calmed through a face-saving arrangement as it was in 2014 – until tensions break out again. “Qatar will say I’m sorry, rein in a couple of things, and things will go back to a controlled tension,” he said.Such an outcome is made more likely by the fact that Qatar is not comfortable with the way the Saudis cast it as being in the camp of Iran, Syria, Hamas and Hezbollah.It prefers to be in the middle, a place that allows it to mediate between different forces, Podeh noted.Israel has a stake in how the crisis plays out and the extent to which Qatar cuts its ties with Hamas. “The question becomes, is turning the screws against Hamas going to lead to reconciliation with the PA or will it lead Hamas to be more belligerent,” Friedman says. “I don’t have an answer to that.”