The current round of talks is the latest stage in Syria's return from the cold in terms of its reintegration into the mainstream of Arab diplomacy.

By JONATHAN SPYER
JANUARY 17, 2010 22:41
assad abdullah 248.88
(photo credit: AP)
Advertisement
Syrian President Bashar Assad is reportedly scheduled to visit the Saudi capital Riyadh, where he is to meet with Saudi King Abdullah. The meeting is rumored to be a prelude to a three way summit also to involve Egyptian President Hosni Mubarak. The current round of talks is the latest stage in Syria's return from the cold in terms of its reintegration - on its own terms and with no concessions made - into the mainstream of Arab diplomacy. This process, in turn, is testimony to the current weakness of Saudi Arabia's position.The two traditional lynchpins of the modern Arab state order - Egypt and Saudi Arabia - today find themselves in an uncomfortable position. The key regional strategic process taking place is the contest between the United States, Israel and their allies on the one hand, and the Islamic Republic of Iran and its clients on the other. This clash between non-Arab-led forces has effectively broken apart the traditional patterns of Arab diplomacy, with Arab states engaged on either side. This split has been perhaps most glaringly - and for the Arabs most embarrassingly - apparent in the Arab-Israeli arena. 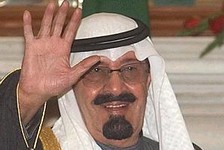 Saudi King Abdullah (AP).During Operation Cast Lead, the Arab League was unable even to assemble a quorum in order to condemn Israel's actions. This was because the split in the Palestinian camp had in effect produced two Palestinian national movements, one aligned with the pro-Iranian regional camp (Hamas), and the other associated with the pro-Western camp. In Operation Cast Lead, Israel went to war with the pro-Iranian Palestinian element.The Saudis are frightened of the Iranian regime. They are also deeply uncomfortable with a situation in which the great legitimating flag of Islamic and regional opposition to Israel is passing into the hands of the Iranians. They are therefore seeking to re-absorb the two Arab elements who have drawn closest to Teheran - Syria and the Palestinian Islamists - back into the fold of Arab diplomacy.There is a fatal flaw in the Saudi design. The flaw is Riyadh's weakness. The Saudis can only seek to tempt. They cannot insist, much less coerce. What they wish to present as rapprochement thus ends up looking more like surrender to the pro-Iranian camp. 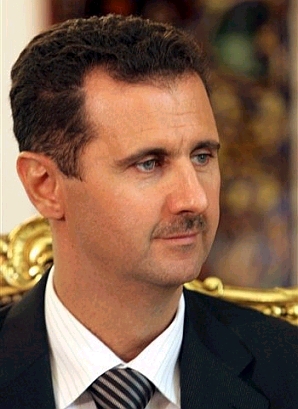 So since October, Riyadh has been hard at work on the Syrians. The main policy result of this so far has been the foundation of a new government in Lebanon. The new government in Lebanon became possible because the clients of Saudi Arabia conceded the demands of the pro-Iranian, pro-Syrian element in their entirety, following five months of inconsequential bargaining.The leaders of the new government have since made supplicatory trips to Damascus. They are pledged not to disturb the independent pro-Iranian military force in the country (Hizbullah.)
Bashar Assad (AP).Riyadh now appears to be trying to perform something similar on the Palestinian track. A flurry of diplomacy is under way. Hamas leader Khaled Mashaal met with the Syrian president in Damascus. Assad on that occasion stressed to Mashaal the importance of Palestinian unity.The Saudis are subsequently known to have encouraged Abbas to meet with Mashaal in Damascus.It is not yet clear what exactly the Saudis are driving at. But Saudi Arabia's current actions are the latest proof that Syria's policy of disruption works - at least against weak and irresolute enemies. While holding fast to their alliance with the Iranians, and in return for nothing, the Syrians have been invited back to the top table of Arab diplomacy. This, the Saudis hope, will allow for the noble task of trying to put Humpty together again - that is, rebuilding Arab regional diplomacy along the comforting lines of all-together-against-Israel (at least verbally).The problem with all this is that it won't work. If the Saudis or anyone else believe that the pro-Iranian alliance can be stopped in its tracks by handing it victory, they are sorely mistaken. The result of surrender in Lebanon has not been to restore "normality" to that country - it has been to place it firmly back into the Syrian/Iranian orbit.It is in any case not at all certain that the senior partner (the Iranians) are interested in Palestinian reunification. The Iranians want to control the frontlines of conflict between Israelis and Islamic forces, as they see it.  They currently control fronts to Israel's north (Lebanon) and south (Gaza). It is difficult to see why they would allow one of these to be ceded.But in any case, current Saudi actions have the feel of an attempt to turn the clock back - to a time when the Arabs could unite in happy inactivity around declarations of support for the Palestinians. Iran's regional ambitions have ended all that, and have produced new and unfamiliar patterns of pragmatic alignment.These are the products of a reality which shows no sign of changing substantially any time soon. In the Middle East today there is the US-led alliance and the Iran-led alliance. There is no third, Arab way. Offering up gifts to Iran's chief Arab partners, meanwhile, will serve not to satiate the Iran-led bloc, but rather to whet its appetite.The writer is a senior research fellow at the Global Research in International Affairs Center, IDC, Herzliya.
Advertisement
Subscribe for our daily newsletter

On Sukkot, safety is not a luxury - opinion