Analysis: Turkey, let down by West, looks for alternative superpower support in Russia

The normalization of relations is not a done deal as Russia will want Turkey to stop supporting rebels in Syria. 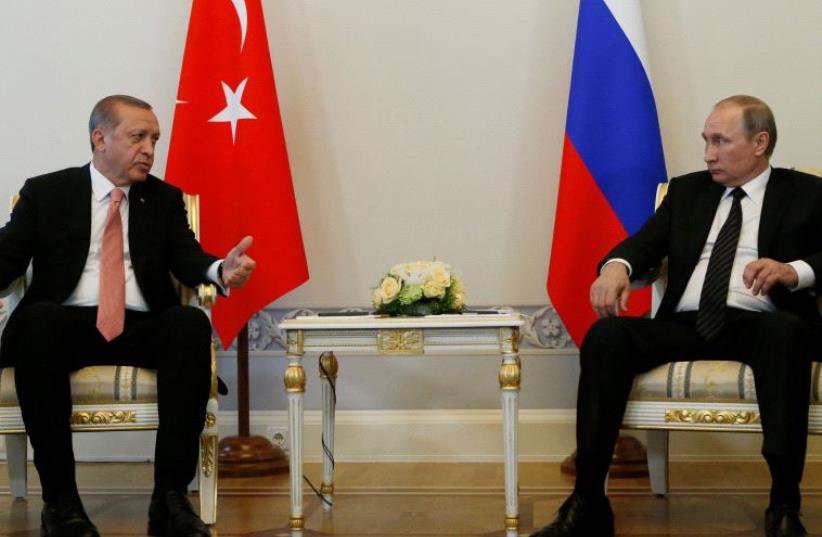 Turkish President Tayyip Erdogan speaks to Russian President Vladimir Putin (R) during their meeting in St. Petersburg, Russia, August 9, 2016
(photo credit: REUTERS)
Advertisement
After the failed coup attempt in Turkey, President Recep Tayyip Erdogan’s government has cracked down against suspected domestic political opponents, threatening relations with the West and opening a window of opportunity with Russia.Erdogan’s visit to Russian President Vladimir Putin’s palace in St. Petersburg on Tuesday is another sign of the reset in Turkish foreign policy that included rapprochement with Israel and a possible shifting policy in neighboring Syria.The meeting between Putin and Erdogan is a major step in moving to normalize relations following the downing by Turkey of a Russian jet near its border with Syria last year.The meeting provided a stark visual of a NATO country’s leader making his first visit abroad after a coup attempt not to a fellow alliance ally, but rather to its nemesis, Russia.“Erdogan’s rapprochement with Moscow reflects the growing Russian influence in Middle East affairs at the expense of a retreating US,” Prof. Efraim Inbar, director of Bar-Ilan University’s Begin-Sadat Center for Strategic Studies told The Jerusalem Post on Tuesday.Erdogan referred to the shifting power balance by taking an underhanded swipe at the US in an interview with Russia’s Tass News Agency prior to his meeting with Putin: “Russia is fundamentally the key and most important player in establishing peace in Syria.”Anti-American sentiment is high in Turkey and many believe a conspiracy theory that the US had a hand in the coup attempt, which the Turkish government blames on Fethullah Gulen, a former ally now living in Pennsylvania who has a large following in Turkey and throughout the world. Gulen denies being behind the rebellion.“There is a serious anti-American feeling in Turkey, and this is turning into hatred,” Justice Minister Bekir Bozdag said in an interview with the state-run Anadolu Agency broadcast live on Turkish television channels.“It is in the hands of the United States to stop this anti-American feeling that is leading to hatred.”Responding to Turkey’s demand for Gulen’s extradition, US President Barack Obama has said Ankara first must provide clear evidence of wrongdoing.“If he is not extradited, Turkey will have been sacrificed for a terrorist,” charged Bozdag.In addition, Turkey has tense relations with the EU over the migrant influx and Ankara’s demand to have its citizens granted visa-free travel. The harsh crackdown on Erdogan’s opponents also has soured relations.Inbar went on to point out that “Erdogan feels pressure from the US and the Europeans because of his authoritarian tendencies and he is looking for powerful friends who are less disturbed by the deterioration of Turkish democracy.”However, the normalization of relations is not a done deal as Russia will want Turkey to stop supporting rebels in Syria and Turkey may offer to drop some support in return for a free hand against Kurds in northern Syria.A sticking point over Syria will probably be Turkey’s support for various Islamist opposition groups.In the Tass interview, Erdogan also claimed that the Nusra Front, which recently formally separated from al-Qaida, should not be considered a terrorist group because it is fighting against the Islamic State.Therefore, trade, tourism and energy cooperation between the countries is likely to grow as a result of warming relations, but expecting full alignment over the Syrian war or other regional conflicts is unlikely.Reuters contributed to this report.