Analysis: What exactly is happening in Saudi Arabia?

Prince Mohammed is overseeing the most dramatic changes his country has seen in the past half century. 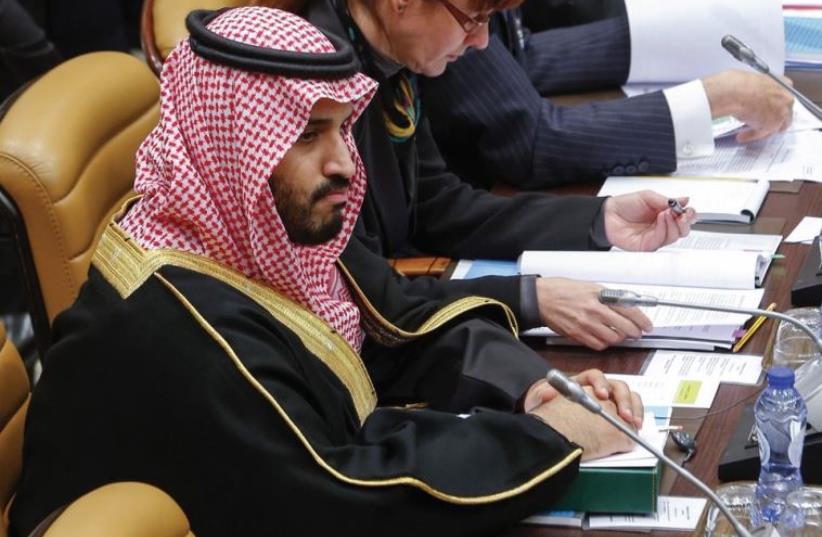 Saudi Defense Minister Prince Muhammad bin Salman attends the gathering of the Defense Ministers of the Global Coalition against ISIS at NATO headquarters in Brussels, February 11
(photo credit: REUTERS)
Advertisement
Saudi Deputy Crown Prince and Minister of Defense Mohammed bin Salman is 31-years-old, charismatic, full of verve and very single-minded.Following in the footsteps of the French philosopher-cum-Svengali Bernard-Henri Lévy, who is commonly referred to as BHL, the young prince styles himself MBS.He picks up titles like other young men pick up dates. Nominally second in line to the throne, behind his cousin Crown Prince Mohammed bin Nayef, he has already been put in charge of many of the Gulf kingdom’s diplomatic initiatives including a new cooperation council with Jordan and is, de facto, the man charged with steering Saudi Arabia into a new economic reality over the next fifteen years.MBS is the author of “Saudi Vision 2030,” a hugely ambitious plan to wean the country of its dependence on oil income and diversify the local economy. Last weekend, the prince calmly fired Ali al-Naimi, Saudi’s minister of oil for the past twenty years, and replaced him with Kalid al-Falih, a widely respected oil industry technocrat.In Riyadh, Western correspondents report, the young prince is known as “Mr. Everything.”Speaking with Bloomberg news last month, Mohammed delineated two iterations of himself: “one who pursued a vision of his own, and one who adapted to the court as it was.”“There’s a big difference,” he said. “The first, he can create Apple. The second can become a successful employee. I had elements that were much more than what Steve Jobs or Mark Zuckerberg or Bill Gates had. If I work according to their methods, what will I create? All of this was in my head when I was young.”Prince Mohammed is overseeing the most dramatic changes his country has seen in the past half century. This week, Dad, aka King Salman bin Abdul-Aziz Al Saud, issued a blizzard of decrees (51, to be precise) rearranging the institutions of state to facilitate the implementation of his son’s plans.Throughout 2015, something close to dread burbled up from the monolithic façade of Riyadh’s officialdom as it became clear that Saudi Arabia was burning through its foreign reserves faster than had previously been foreseen and that insolvency loomed, possibly within 24 months.Saudi Arabia has traditionally relied on the petroleum sector for 90% of its state budget, and cratering oil revenues resulted in a budget shortfall of almost $200 billion.New thinking was required, stat.Replacing the legendary al-Naimi with al-Falih made headlines, as did Prince Mohammed’s proposal to fill the national coffers through an the IPO of the state-owned oil conglomerate, Saudi Aramco, that, if it comes to fruition, is expected to fetch as much as $2 trillion.But these are only two parts of a much broader plan to fundamentally recast the kingdom.The aim is to reorient the Saudi economy away from dependence on oil revenues and towards a newly conceived private sector.“Saudi Vision 2030” is the road-map for its implementation.The prince’s plan foresees a significant expansion of the manufacturing sector, which currently accounts only for a quarter of Saudi non-oil economic activity, in the hope that is will boost private sector activity from 45% to 60% of gross domestic product and reduce unemployment from 11.6% to a projected 7%.The arid kingdom’s water sector is also being revolutionized. A new Ministry of Environment, Water & Agriculture has been established, while electricity will as of now be part of al-Falih’s expanded purview as energy czar.In addition, the Saudi Ministry of Commerce and Investment has been reconstituted sans investment, and is now part of the new energy “super-ministry.”In yet another change, Ahmed al-Kholifey, who served as deputy for the past three years, has now been elevated to the post of Governor of the Saudi central bank.Lastly but not incidentally, a brand new Commission for Recreation and Culture has been established as part of the national reorganization.Run by Ahmad al-Khatib, a former health minister with close ties to the royal family, Khatib faces the challenge of developing new tourism and entertainment options that are admissible within the severe restrictions of social behavior permitted within the ultra-conservative kingdom.MBS has been letting it be known he sees the need for a certain liberalization, though no one expects conservative clerics, who have traditionally enjoyed being part of the House of Saud’s inner circle, to easily permit any attempts to free up the structures that frustrate the kingdom’s youthful majority.The prince’s plan promises unspecified “cultural and entertainment” projects including spaces for cultural events, libraries and museums, and, in terms of household spending, it hopes to double the amount currently being spent on cultural activities and entertainment, from 3% to 6% by 2030.