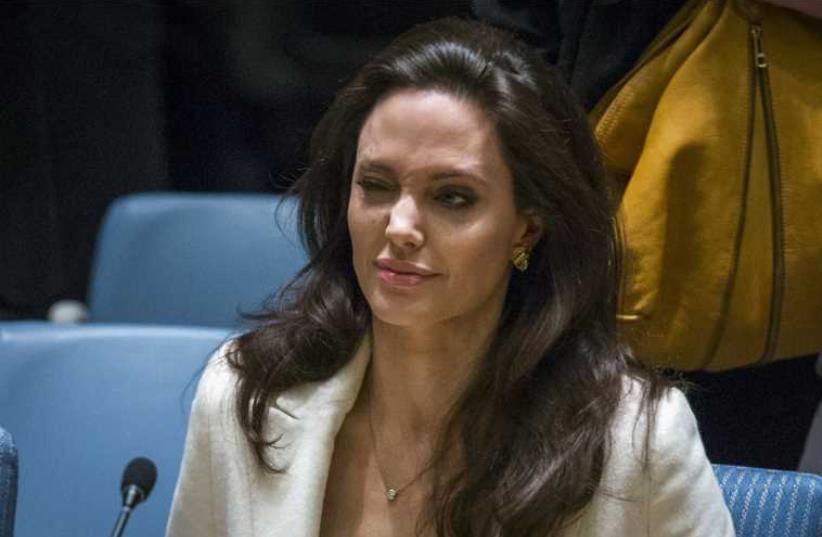 United Nations High Commissioner for Refugees special envoy, actress Angelina Jolie, winks as she arrives to speak during a Security Council meeting regarding the refugee crisis in Syria
(photo credit: REUTERS)
Advertisement
The United Nations aid chief urged the Security Council on Friday to impose an arms embargo and sanctions in Syria for violations of humanitarian law as special envoy Angelina Jolie pleaded with council members to visit millions of Syrian refugees.The aid official, Valerie Amos, also appealed to the council to mandate the United Nations' commission of inquiry on Syria to specifically investigate besieged areas, the militarization of schools and hospitals and attacks on those facilities.The United Nations says about 440,000 people are besieged in Syria's civil war, now in its fifth year. Of those, 167,500 are trapped by government forces, 228,000 by Islamic State militants and the rest by other armed groups.Actress and director Jolie, a special envoy of the UN High Commissioner for Refugees, appealed for unity and accountability for some 4 million Syrian refugees. She has made 11 visits to Syrian refugees in Iraq, Jordan, Lebanon, Turkey and Malta."We cannot look at Syria, and the evil that has arisen from the ashes of indecision, and think this is not the lowest point in the world's ability to protect and defend the innocent," Jolie told the 15-member Security Council."Those refugees cannot come to this council, so please, will you go to them," said Jolie, who also berated the council for failing to overcome divisions to end the war.When asked about Jolie's planned briefing, Syria's UN Ambassador Bashar Ja'afari responded: "She is beautiful."A Syrian troop crackdown on a pro-democracy movement in 2011 led to an armed uprising. Islamic State militants have taken advantage of the chaos to declare a caliphate in Syria and Iraq.The United Nations says some 220,000 people have been killed and an estimated 7.6 million are internally displaced. Amos asked the council to "send perpetrators a clear message that their crimes will not go unpunished.""The government, armed and terrorist groups, continue to kill, maim, rape, torture and take Syria to new lows that seemed unimaginable a few years ago," said Amos. "We need the numbness to the senseless violence and the apparent apathy to end."The council failed last year to refer Syria's war to the International Criminal Court for possible prosecution of war crimes and crimes against humanity. Syrian ally Russia, backed by China, vetoed the move.Russia, with the support of China, vetoed three other council resolutions that threatened President Bashar Assad's government with sanctions. Western diplomats say there are no indications Moscow would be willing to support sanctions now.