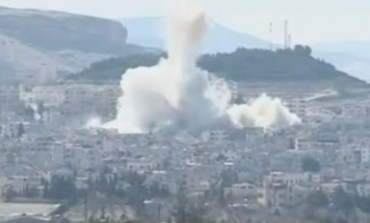 BEIRUT - Government forces backed by Hezbollah fighters took full control of the Syrian town of Yabroud on Sunday after driving out rebel fighters, state media said, helping President Bashar Assad to secure the land route linking the capital Damascus to the former commercial hub of Aleppo and the Mediterranean coast.The fall of Yabroud, the last rebel bastion near the Lebanese border, would also choke off a vital insurgent supply line from Lebanon and consolidate government control over a swathe of territory from Damascus to the central city of Homs.Warning graphic scenes shown in video State television SANA said government forces had won "complete control" over the town, killing or capturing many rebels.A military source told Reuters most of the rebels had pulled out of Yabroud around dawn, a day after government forces entered its eastern districts and captured several hilltops.Troops had dismantled a large number of explosive devices planted by the rebels, SANA said.A fighter in Yabroud from the Nusra Front, al-Qaida's official affiliate in Syria, confirmed to Reuters the rebels had decided to pull out. They were heading towards nearby villages including Hosh Arab, Rankos and Fleita, he said.Fighters from the Lebanese Shi'ite Muslim militant group Hezbollah supported the Syrian army and pro-government fighters in sealing off the frontier area with Lebanon.He said they did not plan to withdraw across the Lebanese border to Arsal, a crossing point 20 km (13 miles) to the northwest which rebels and refugees have used regularly.Thousands of civilians fled Yabroud, a town of about 40,000 to 50,000 people roughly 60 km (40 miles) north of Damascus, and the surrounding areas after it was bombed and shelled last month ahead of the government offensive.Scenes broadcast by Al Mayadeen television from a main thoroughfare inside Yabroud showed empty streets, shuttered shops and abandoned homes.Heavy gunfire could be heard in the background, which a reporter said came from a nearby area where government forces were clashing with rebel holdouts.The Syrian Observatory for Human Rights, an anti-Assad monitoring group, said government shelling of some districts overnight accompanied fighting between pro-government forces and rebel factions including the Nusra Front and the Islamic State of Iraq and the Levant, an al-Qaida splinter group.The government has been making incremental gains along the land route as well as around Damascus and Aleppo in the past months, regaining the initiative in a conflict entering its fourth year.More than 140,000 people have been killed in the increasingly sectarian civil war, which began with mass street protests against Assad but turned into an armed insurgency after a crackdown on demonstrators.