By REUTERS
Smoke rising from suburb in Damascus 390
(photo credit: REUTERS)
Advertisement
Syrian President Bashar Assad on Saturday blamed 11-months of turmoil in which his forces have cracked down on pro-democracy protesters as a ploy to split the country."What Syria is facing is fundamentally an effort to divide it and affect its geopolitical place and historic role in the region," Assad was quoted by Syrian state television as saying, after meeting China's vice foreign minister in Damascus.Assad made the comments as Syrian security forces fired live ammunition to break up a anti-regime protest in Damascus on Saturday, killing at least one person, opposition activists said.The shooting broke out at the funerals of three youths killed on Friday in an anti-Assad protest that was one of the biggest in the capital since a nationwide uprising started."They started firing at the crowd right after the burial. People are running and trying to take cover in the alleyways," said a witness, speaking to Reuters in Amman by telephone.The opposition Syrian Revolution Coordination Union said the gunfire near the cemetery had killed one mourner and wounded four, including a woman who was hit in the head.Up to 30,000 demonstrators had taken to the streets in the Mezze district of Damascus, witnesses said.Footage of the funeral broadcast live on the Internet showed women ululating to honor the victims. Mourners shouted: "We sacrifice our blood, our soul for you martyrs. One, one, one, the Syrian people are one".
China backs Assad referendum China said on Saturday it backed Syrian President Bashar Assad's plans for a referendum and multi-party elections to resolve the Syria crisis, a show of support against world condemnation of the Syrian leader's crackdown on a popular uprising.After meeting Assad in Damascus, Chinese Vice Foreign Minister Zhai Jun also called for an immediate end to the violence by all sides in the 11-month-old conflict.Assad announced his plan on Wednesday for a referendum on a new constitution on Feb. 26 followed by a multi-party election. The Syrian opposition and the West swiftly dismissed it as sham. 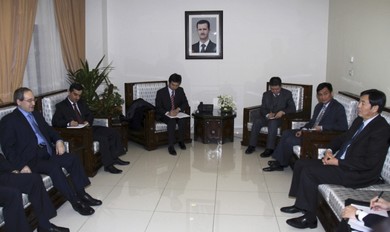 Chinese diplomats in Damascus"We hope that the referendum on the constitution and the parliamentary elections take place in a continuous way," Zhai said, according to Syrian state television monitored in Beirut."China supports the path of reform taking place in Syria and the important steps that have been taken in this respect."The Chinese state news agency Xinhua highlighted Zhai's comments that China was "deeply concerned by the escalating crisis and wanted the government and various political factions in the country to end all acts of violence against civilians".The Syrian report quoted him as saying: "The Chinese experience shows a nation cannot develop without stability".China and Russia have been Assad's most important international defenders during the crackdown which has killed several thousand people and divided world powers. The United Nations, the United States, Europe, Turkey and Arab powers want Assad to step down and have condemned the ferocious repression.Beijing and Moscow vetoed a UN Security Council resolution on Feb. 4 calling on Assad to quit and also voted against a similar, non-binding General Assembly resolution on Thursday.