Assad: US 'should expect everything' if it attacks Syria

In CBS interview, Syrian leader says US strikes would boost the al-Qaida offshoot in his country.

By REUTERS
Assad in Chalie Rose interview 370
(photo credit: YouTube Screenshot)
Advertisement
WASHINGTON - Syrian President Bashar Assad warned of possible reprisal attacks if the United States uses military force against Syria, saying that if there were strikes, Americans could "expect every action."Assad, in an interview with CBS television that aired on Monday, denied involvement in a suspected chemical weapons attack near Damascus on Aug. 21. 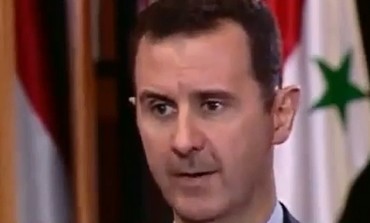 Syrian President Assad speaks in interview with Charlie RoseThe United States says more than 1,400 people were killed in the attack, which it blames on Assad's forces. President Barack Obama has threatened military strikes against Syria as punishment.Assad, who has accused the rebels of the poison gas attack, said that if there were US strikes on Syria, the United States "should expect everything."Repercussions "may take different forms," including "direct and indirect" effects, Assad told CBS in the interview, which was conducted in Damascus.Indirect impacts could include "instability and the spread of terrorism all over the region that will influence the West directly," Assad said.Crisis in Syria - full JPost.com coverage
He said there could be repercussions against the United States from other countries or groups such as Iran or Lebanon's Hezbollah.His comments come as Obama prepares to press his case for military action before the American public and US lawmakers this week. Obama has asked the US Congress to authorize a military strike, and votes could come as early as this week.In the meantime, Assad said: "We have to expect the worst."Assad repeatedly rejected the idea that there is any evidence linking his government to the Aug. 21 attack, and he blasted US Secretary of State John Kerry's efforts to round up international support for military strikes.He also told CBS the Syrian government opposes the use of chemical weapons. "We are against any WMD, any weapons of mass destruction whether chemical or nuclear." Asked if he considers chemical warfare equivalent to nuclear warfare, Assad said: "I don't know. We haven't tried either."To Obama, Assad said: "I will tell him very simply, "Present what you have as evidence ... to the public. Be transparent."Kerry dismissed Assad's denial of involvement in the attack."We know that his regime gave orders to prepare for a chemical attack," Kerry said at a news conference in London, one of several European stops in recent days to make the US case for military action.Assad said that any US strikes would boost the al-Qaida offshoot in his country: "It's going to be direct support.""It's an area where everything is on the brink of explosion. You have to expect everything," Assad said.
Advertisement
Subscribe for our daily newsletter